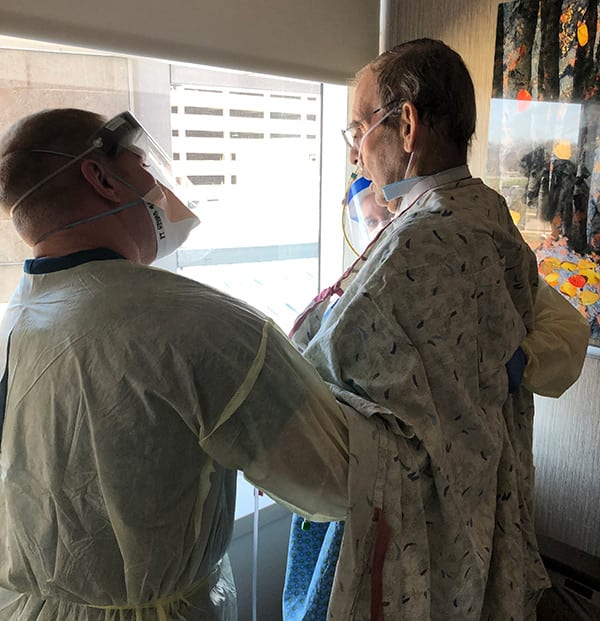 The first COVID-19 patient to receive convalescent plasma in Colorado achieved a “huge” milestone this week, getting off a ventilator after 34 days and standing up on Monday to wave from his hospital window to his wife, son and dog outside.

Dr. Michael Leonard had been one of the most critically ill patients at UCHealth University of Colorado Hospital. He arrived struggling to breathe on March 24 and told his doctors he needed to be intubated. Previously, the Evergreen anesthesiologist and health care consultant had been healthy and active with no preexisting conditions. But in early March, he traveled extensively around the country, advising hospital leaders on safety and reliability. Then, he was stricken himself.

Standing, waving and a ‘good boy’ for the dog

Michael’s wife and family had not been able to see him – except through FaceTime visits – since Meg brought him to the hospital back in March.

On Monday, that finally changed.

“Honey, we love you so much. It’s just so great to see your face,” Michael’s wife, Meg told him over a FaceTime call as she waved from the ground up to Michael’s second floor window in one of the hospital’s COVID-19 Intensive Care Units.

Meg held up a poster with a big red heart on it.

With help from his physical therapist, occupational therapist and his nurses, Michael stood up, took a couple of steps from his bed to the window and waved to Meg, their son, Matthew, and the family dog, a German shepherd named Momo.

Tears welling in his eyes, Michael told his family he loved them. And he pledged to come home soon.

“We’re going to have a heck of a party when I get home,” Michael said.

Michael loves cars and Matthew drove an old blue Hummer that he is restoring to the hospital.

Since military officials frequently use Hummers, Michael joked that Matthew and Meg had brought a military invasion vehicle. Even the dog recognized his voice and perked up.

He managed to stand for about 7 minutes, which was an eternity considering he had been totally immobilized for more than a month and just days ago, couldn’t speak and could barely sit upright at the edge of his bed, even with the help of his physical therapist, Matt Crow, and his occupational therapist, Julia Smith.

Convalescent plasma lifted spirits and may have boosted Michael’s antibodies

For Meg, seeing her husband of 32 years rise up and wave to her allowed her finally to believe Michael could keep the promise he texted to her just before having to go on the ventilator: “I’m coming home.”

“My heavy heart is finally starting to lift,” Meg said.

Getting off the ventilator marked a critical turning point, both Meg and Michael’s medical providers said.

“It’s huge: getting out of the ICU and off the ventilator,” Meg said.

She and Michael’s care team will never know for sure whether the convalescent plasma was pivotal in saving Michael’s life. But they know it lifted the family’s spirits.

Michael’s daughter is also a doctor. Dr. Molly Leonard, is a surgical resident in Utah. She had heard that convalescent plasma from people who had survived COVID-19 had helped some patients elsewhere in the world. There have only been small studies so far, but the outcomes were promising.

One study of five critically ill patients suffering from COVID-19 in China, found that all five improved after receiving convalescent plasma.

With no cures for COVID-19 and vaccines many months away, convalescent plasma offers glimmers of hope in the short term. People who have survived the infection have antibodies in their blood that can help sick people mount a fight against the infection.

To help her dad get plasma, Molly shared an urgent plea on Facebook, and her post was shared more than 42,000 times. The family’s advocacy led to plasma donations to Children’s Hospital Colorado for Michael and many other patients. So far, about 40 COVID-19 patients at University of Colorado Hospital have received convalescent plasma.

While Meg doesn’t know how much the transfusion of antibodies helped her husband, she is certain that the infusion of plasma gave the family a critical boost at a very difficult time. Meg suffered a milder case of COVID-19 and now is eager to donate her plasma to help others struggling with the illness.

“It was so dark before he got the plasma. Things were really going downhill, and then he got the plasma, and very gradually, things slowly started to get better. We’ll never know for sure, but that might have gotten him through,” Meg said.

And now, Monday’s invigorating visit outside the hospital just might get Meg through the final days of her husband’s lengthy hospitalization. For the Leonards and other families whose loved ones have COVID-19, the inability to visit hospitals has been heart wrenching. Meg hopes she won’t have much longer to wait to hug her husband or hold his hand.

Michael was moved late Monday to a pulmonary recovery unit.

As he left the ICU, nurses, doctors and other members of his care team lined the hall, cheered and applauded.  After he recovers more, Michael will begin intensive rehabilitation to gain back his strength.

As Meg and her son drove home to Evergreen on Monday, both commented on how wonderful it had been to see Michael, even from the parking lot below.

“Wow. It was awesome to see him in person and know that he’s still the dad I know.  It relieved a lot of stress and anxiety for me,” Matthew told his mom.

“We’ve all been so worried,” Meg said.  “We’re a close family. We all love each other and worry about each other.”

Michael’s care team says he is doing very well considering how critically ill he had been. It’s normal for patients who have been in medically induced comas not to remember much of their time in the ICU. Some feel foggy for a few days after being extubated from ventilators and emerging from very heavy sedation.

Michael’s physical therapist, Matt Crow, has been working with Michael for the past week.

“It was amazing to watch him stand at the window,” Crow said. “We saw how much hope it gave to his family to see him. It also gave us hope.

“It’s been a very long road for them,” Crow said. “We’re seeing so many patients who are fighting for their lives.”

Crow said the really positive moments in the ICU, like the one on Monday with Michael, are “few and far between.”

“We are seeing some people pull through, but this was a really good day,” he said.

Crow and Julia Smith, the occupational therapist who works closely with him in the ICU, had another wonderful moment with Michael at the end of last week. Pictures of Michael’s family hang in his room. Crow spotted a picture of Michael’s daughter, Molly, and mentioned the plasma donation.

“She fought so hard for that,” Michael told Crow.

“He teared up and I was tearing up,” Crow said. “He’s very much putting the pieces back together. We got to see his true self starting to show through.”

‘He’s got life in his eyes’

Maggie Williams, a critical care nurse practitioner who has been caring for Michael since he arrived back in March, said Michael is doing very well.

“It’s incredibly exciting to see him make such big progress. He’s had such a long course and he has fought so hard,” she said. “He’s got more life in his eyes. He seems excited to interact with all of us and with his family.”

For all updates and to read more articles about the new coronavirus, please visit uchealth.org/covid19

Williams concurred with other medical providers who said the family separations have been devastating.

“Family makes such a difference. I think that’s been one of the hardest parts of this whole situation. As critical care teams, we are very dependent on families and we really try to involve them in the care planning process. Michael’s family has been incredibly supportive and it was so exciting to see them be able to interact with him for the first time in weeks.”

Williams said Michael was one of the unit’s first COVID-19 patients, one of the patients who has been on a ventilator the longest, and certainly one of the most gravely ill patients.

That’s why his recovery has buoyed the spirits of his care team so much.

“It’s a huge victory for his family,” she said of Michael’s ability to stand up and greet his loved ones.

“It was such a big celebration for them and for our entire team. Our nursing staff members have been by his side 24/7. Everyone is thrilled to see the progress he has made.”

“They lose a lot of muscle mass, but Michael has made a lot of progress already with his team. He has that drive and that fitness (from before he got sick) that will help him in his recovery,” she said.

“It’s been amazing to see someone go through this whole COVID course. He was very critically ill. Now, to see him stand up and wave to his family was so great. It gives us hope that other people will get better too.”