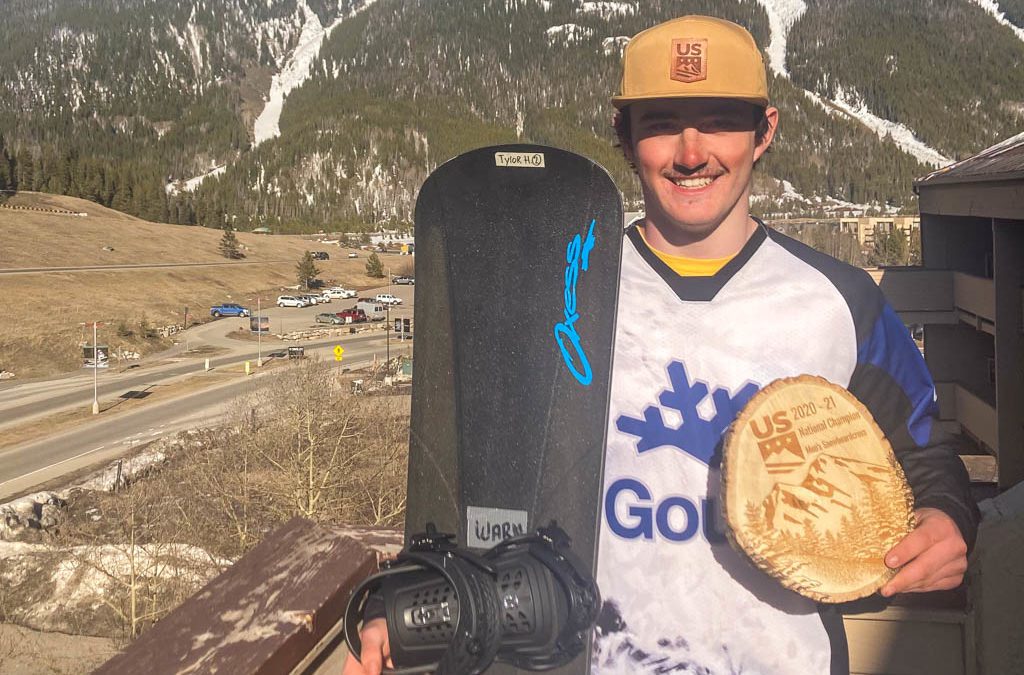 Bethel resident and Gould Academy student-athlete Tyler Hamel ’22, won the FIS US National Championship for Men’s Snowboard Cross last weekend at Copper, CO. The family has called Sunday River their mountain home for nearly a decade, and Hamel participated in the GACP weekend program there for many years.

“Tyler and the rest of the Gould Academy snowboard cross athletes have made their home mountain and community proud,” says Sunday River Resort’s president, Dana Bullen. “Each athlete who trains at Sunday River, whether through the seasonal Gould Academy Competition Program or as a student at Gould, benefits from the meticulously maintained terrain, a dedicated coaching staff, and these impressive accomplishments by fellow skiers and snowboarders in the program.”

“Tyler and the rest of the Gould Academy snowboard cross athletes have made their home mountain and community proud!”

The team had an amazing week at the US Ski and Snowboard Team’s Hole Shot Tour SBX and SX at Copper Mountain. FIS rookies Nathan Pare ’23 and Sofia Stasinos ’23 also had big days. Pare qualified 5th and upset the field battling his way into the Big Final and placing 4th. Stasinos placed a career-best 11th place at the National Championship as well.

“The Snowboard and Ski Cross team made noise and put up world-class results all week in Colorado,” said Coach KC Gandee, “but this is huge! Tyler Hamel began the day by qualifying first in the best-of-two run time trial on the course. He then raced his way through three 4-man heats, beating current and former US Snowboard Team members on the way to the Big Final. He took the hole shot in the big final and never looked back to claim his first FIS win.”

The Holeshot Cross Tour is designed to bridge the gap between grassroots and World Cup-level Snowboard Cross and Ski Cross events. The series also brings together athletes across the country to identify the top juniors. For the 2021 season, the Holeshot Cross Tour consisted of two FIS international races and one National Championship competition for both snowboard and ski cross.

“The Snowboard and Ski Cross team made noise and put up world-class results all week in Colorado, but this is huge!”

The International Ski Federation (FIS) is the sanctioning body for international competition, including the World Cup and the Olympics. These races at Copper included two FIS races (1st tier of racing) and a FIS National Championship race (2nd tier; followed by North American Cup and World Cup). These were the only FIS races held in the USA this season.

“There is something special happening at Gould Academy. If you’re looking to race SX or SBX, then you NEED to check them out.”