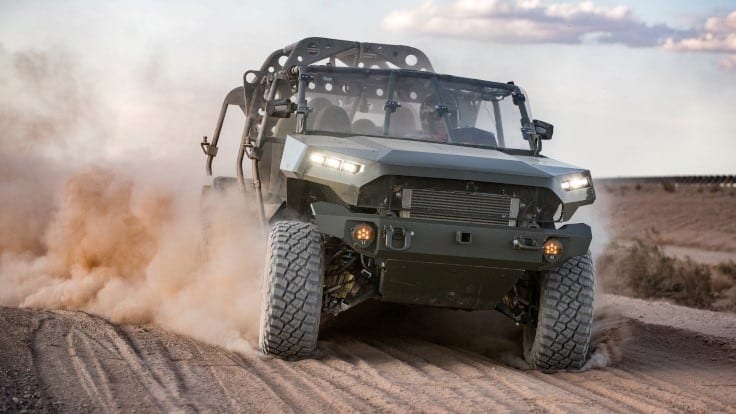 Lordstown, Ohio – Steve Burns knows the electric vehicle (EV) pickup markets is going to be a crowded place by 2022 with models planned by Ford, General Motors, Rivian, Bollinger, Tesla, and other automakers. But the CEO of Lordstown Motors has a few things going for him – a plant fully stocked with functional gear, plans to beat his competitors to the market, and a different technological approach that should make the truck easier to build.

On Thursday, the company celebrated the unveiling of the Endurance, the EV pickup that Burns hopes to have on the road by next summer; plans to begin production this year fell victim to COVID-19.

“Normally, you wouldn’t start sales until this moment, until you had something to show potential buyers,” Burns said from his plant’s floor, pointing to the prototype Endurance truck. “We couldn’t afford to do that. We had to know, before we sunk this much into this project, is there a demand.”

The company is targeting 75 miles per gallon equivalency (mgpe), the U.S. Department of Energy’s measurement of how a user would spend on electricity to match a gas-burning vehicle. Lordstown’s initial market will be commercial buyers, and Burns said his initial sales pitch is telling fleet managers that a $52,000 EV pickup will have one-third the operating costs of the equivalent gas burner. To date, the company has about 14,000 pre-orders, enough to fill its first year’s production expectations.

A key advantage for Lordstown is General Motors’ former Chevy Cruze plant. GM shuttered that facility last year and sold it to Burns soon after. GM is even funding much of that deal, lending Lordstown Motors much of the cash needed to purchase the plant, and the company agreed to leave behind hundreds of functional, well-maintained robots, stamping presses, and assembly equipment.

GM completely overhauled the plant during the 2008-2009 Great Recession, replacing all robots, swapping out pneumatic wrenches and tools for computer-driven electric ones, and upgrading inspection equipment to build the then-new Cruze. The company upgraded individual machines several more times in the decade it built that vehicle. So, while used, the Lordstown equipment is in better shape than Burns expected.

“We were prepared for a certain percentage of the robots and stamping presses and body shop equipment to not operate properly,” Burns said. “We’ve been pleasantly surprised. GM shut it all down perfectly, and they helped us open it up with people who knew how to do things, people who had shut it down for them.”

Those robots must still be reprogrammed, the functional stamping presses need new dies to form truck parts, industrial engineers are still working on assembly processes, and there’s a long list of jigs and fixtures that need to be produced. However, Burns says he’s ahead of some competitors who don’t even have a building yet.

While Lordstown had to abandon plans for a 2020 launch, given the inability to fully staff a plant during the pandemic, if it can go into production early next year, it will still beat others to the electric pickup market by nearly a year.

Much of that advantage comes from having a plant, but Burns said the truck’s design will be easier to build than other models, allowing the company to go through proveout and initial assembly faster than competitors.

“It’s really all about timing for this,” Burns said. “Reinvention at the wrong time – if you’re too early or too late – it doesn’t work. Our timing is perfect. The technology is ready and the market is there for this.”

Most of the initial truck orders that have been places are from utility companies that are encouraging their customers to invest in EVs – more EVs mean more demand for electricity, so Duke Energy, First Energy, and others have ordered trucks to show what they can do for commercial customers. Another early customer is ServPro, a fire and water damage restoration company that has ordered 1,200 trucks.

The critical technological component for the Endurance is hub motors in each of the truck’s wheels instead of a traditional electric motor that sends power to the wheels through a transmission. Hub motors simplify the build by eliminating dozens of sub systems – the truck has four moving parts, the wheels.

Automakers have toyed with hub motors for years, using them in dozens of concept cars. Engineers have discussed adding hub motors to the rear wheels of gasoline-driving front-wheel-drive (FWD) cars to enable all-wheel drive without complicated transaxles. However, for decades, high costs, durability concerns, weight distribution concerns, and power limitations have prevented the motors’ use in actual cars and trucks.

Some commercial vehicles use hub motors for secondary systems, electric wheelchairs have used them, and a handful of golf carts employ the technology. Burns said he began experimenting with them several years ago with his former company Workhorse, a Cincinnati-area EV van maker that’s competing to replace the current postal fleet with hub-motor-powered vehicles.

Power levels are higher than ever with new motors, costs are lower, software is more sophisticated, and several suppliers have good options. Last month, Lordstown Motors licensed a hub motor design from Slovenia’s Elaphe Propulsion Technologies. Employees at the Ohio plant will build the motors in house.

The pickup on display Thursday highlighted the motors with copper-colored wheel coverings that at a distance looked like the copper windings of an electric motor. Upon closer inspection, the covering were mostly cosmetic, although Burns said the vertical lines on the covers that look like motor windings are functional heat-exchanger fins designed to cool the engine as it operates at full load. The company will offer less eye-catching wheel covers at launch, he added, but the company wanted to motor-like covers for the launch.

Burns said using hub propulsion to eliminate vehicle complexity will dramatically increase the production capacity at the plant. GM produced about 400,000 Cruze models per year at Lordstown’s peak. Burns said Lordstown Motors could produce 600,000 trucks if demand is there, despite the fact that the trucks are nearly twice as big as the cars.

“It’s a much easier build. That, more than anything else, is our big advantage,” Burns said.

About the author: Robert Schoenberger is the editor of Today’s Motor Vehicles and Today’s eMobility and a contributor to Today’s Medical Developments and Aerospace Manufacturing and Design. He has written about the automotive industry for more than 20 years at The Plain Dealer in Cleveland, Ohio; The Courier-Journal in Louisville, Kentucky; and The Clarion-Ledger in Jackson, Mississippi.