In the midst of an effort to claim the bipartisan high ground, Sen. Cory Gardner (R-CO) used official (non-campaign) time to headline a fundraiser for the Colorado House Republican caucus fund, controlled by perhaps the most aggressively partisan opponent of Governor Polis in the state: House Minority Leader Patrick Neville.

Like any politician hoping to be reelected this November, Gardner’s schedule is packed with a mix of official and campaign events. The greatest perk of incumbency is the ability to conduct official business in a manner that benefits one’s campaign, and Gardner is no exception, as reporters frequently note.

In his official capacity, Gardner joined several virtual meetings. Two were with of Colorado’s powerful business lobbies: the Colorado Chamber of Commerce and the Colorado Restaurant Association. During those meetings, he gave updates on federal legislation and answered questions from business owners. 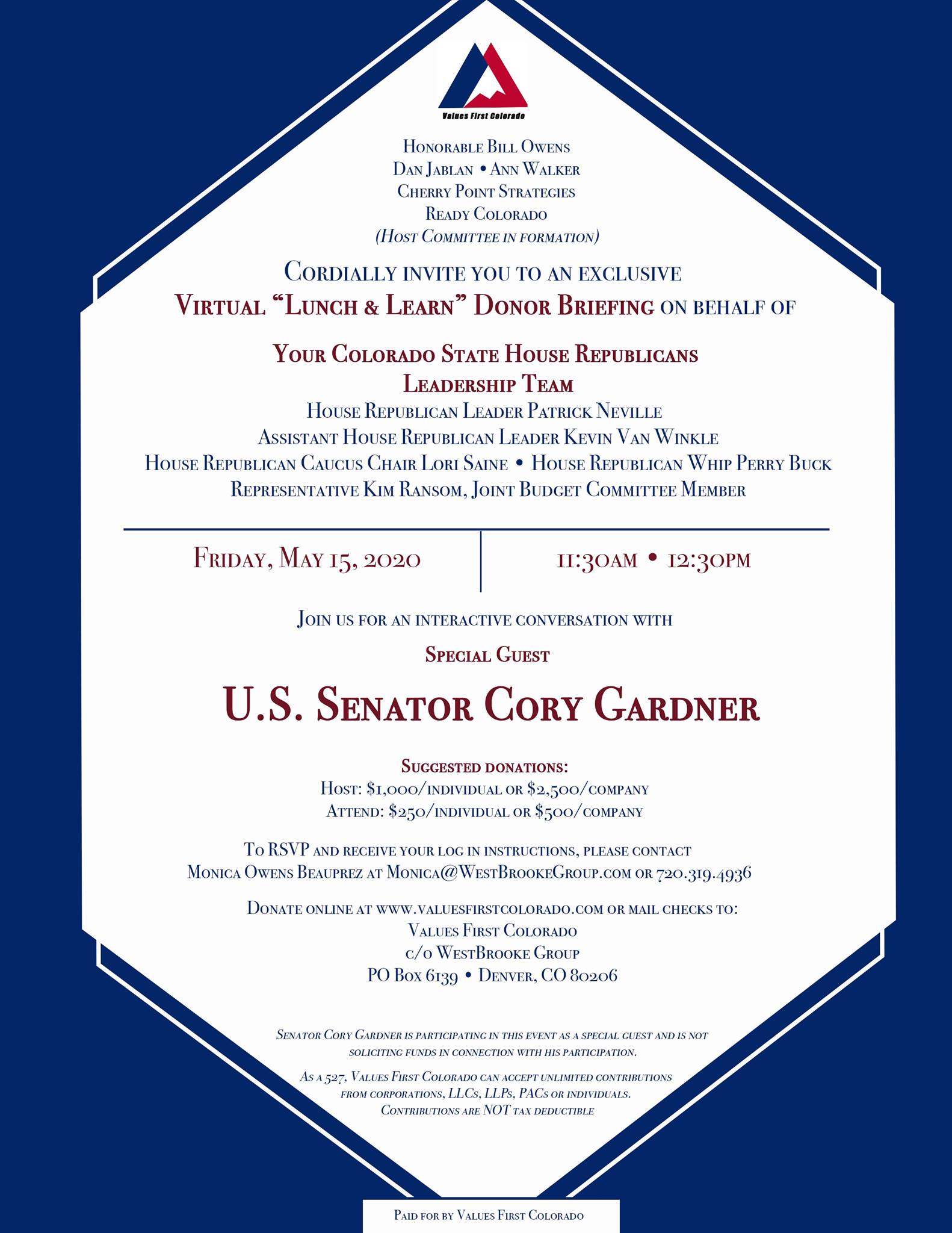 The centrist leanings of the hosts stand in contrast to the far-right positions of VFC itself. Last year the group spent donors’ money in support of failed recall efforts against Democratic legislators as well as Polis. The legislative recalls prompted major corporate donors Xcel Energy and Noble Energy to clarify that they had intended their money to support VFC’s 2018 general election work, not after-the-fact recalls.

That didn’t stop Neville from using extreme rhetoric, though. He accused Polis and the Democrats of having an “agenda to destroy Colorado,” specifically, “to turn Colorado into another California— a leftist-run, job-killing, high-tax, freedom-less wasteland where illegal immigrants, criminals and the homeless are prioritized over law-abiding and hard-working citizens.”

Last fall Patrick Neville and his brother Joe, who is paid to be the registered agent various House GOP committees via his Rearden Strategic consulting firm, split “Take Back Colorado” off from VFC, registering it as its own independent expenditure committee. But as the face of both groups, Minority Leader Neville’s over-the-top accusations can’t be separated by a filing form.

Two days prior to the VFC fundraiser with Gardner, Neville asked for donations via the Take Back Colorado. He wrote:

“Polis and the Democrats [are] scheming to figure out how they can copy radical liberals in California and hand out millions of taxpayer dollars to illegal immigrants! This COVID-19 pandemic is a dream come true for Polis and the Democrats. They’ve been able to control every aspect of our daily lives and force millions to depend on the government in order to survive.”

Neville is leading the public opposition to Governor Polis’ and Colorado’s public health officials’ response to the coronavirus. From saying the public health order will lead to a “Gestapo-like mentality,” to taking photos with a cafe owner who opened up in defiance of the takeout-only restriction and publicly stating that “[masks] don’t accomplish anything,” Neville is an enthusiastic opponent of the state’s science-based policy decisions.

As The Denver Post’s editorial page editor recently opined, “clearly Neville disagrees with how Gov. Jared Polis is using his executive powers, but it’s pure hypocrisy for a law-and-order conservative to suddenly support civil disobedience. Just as it would be crazy for lawmakers who for years have adhered to a rule that they wear a coat in the Colorado House and Senate to refuse to wear a mask.”

Numerous news articles and opinion columns explore the near-impossible political tightrope act required of Gardner to appease base Republicans while at the same time appealing to mainstream independent voters. So while criticizing President Trump is clearly off-limits, Gardner’s campaign and press efforts focus on his bipartisan work, particularly his close relationship with Jared Polis. At the same time however, Gardner, the “happy warrior [who became] a car salesman,” is still helping Patrick Neville build political firepower, nearly all of which is aimed directly at the Governor.