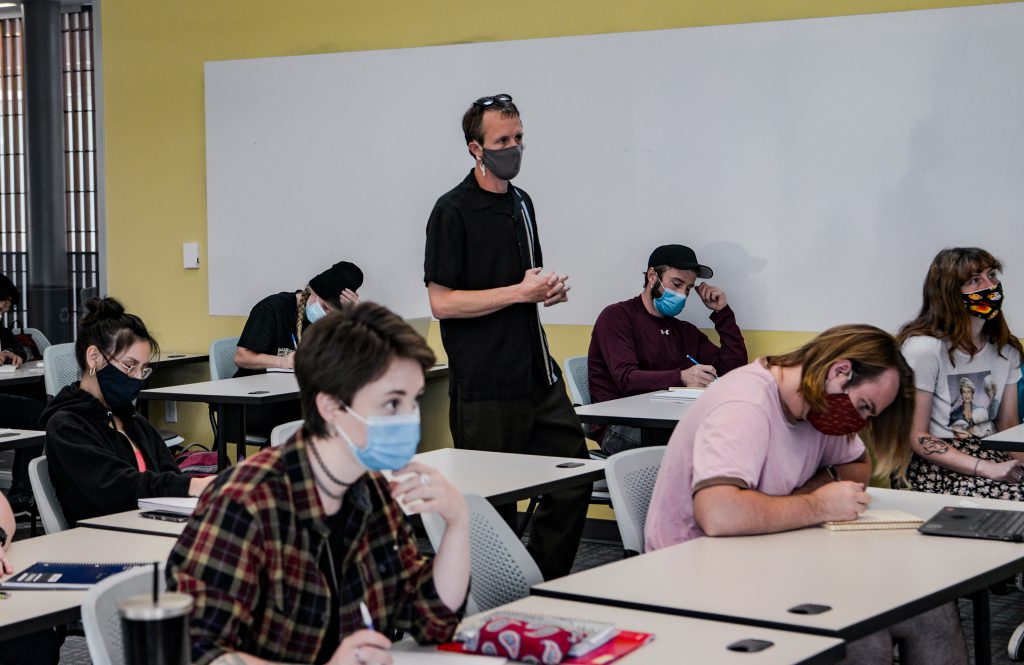 Colorado’s Community College System has 16% fewer students than it did just two years ago, a decline caused in part by an exodus of low-income students who left school during the pandemic to put food on the table, care for their kids and dodge the difficulties of online learning.

The steep downturn followed several years of gradual declines at community colleges in the state and across the country, as a strong economy pushed more young people into the workforce. Colorado’s colleges are now left with dwindling revenue and hoping for a post-pandemic restart.

“We not only have fewer students,” said Joe Garcia, chancellor of the Colorado Community College System, “but those students are also taking fewer credit hours.”

To combat the downswing, colleges in the state are handing taxpayer money to students who agree to stay in school — including $1,000 to some students in Westminster — along with free laptops and car repairs. That has put more money in students’ pockets but not reversed enrollment trends.

“Free textbooks, $500 cash for college prep, we’re giving away tons of free computers, more than $1 million in scholarships, a bunch of federal COVID relief money to help with tuition,” said Warren Epstein, spokesman for Pikes Peak Community College. “All of that and we’re still struggling.”

Colleges have found that their poorest students, hurt most by last year’s economic freefall, face hardships that can’t be solved with free iPads. They need child care and food, so colleges have created small social safety nets on their campuses. Administrators worry that if they don’t, those students won’t come back to class and gaps between the rich and poor will widen.

“It really comes down to a student’s ability to survive versus thrive,” said Patty Erjavec, president of Pueblo Community College. “That’s what we’re facing right now. Their families are more important.”

Clouds roll in over Pikes Peak Community College in Colorado Springs on Sept. 2, 2021.

“We’ve got to do better”

“When the pandemic first hit, I was getting calls from reporters across the country asking, ‘What are community colleges doing to prepare for an incredible onslaught of students?’” said Martha Parham, spokeswoman for the American Association of Community Colleges. “Clearly that did not pan out.”

“So many people who have moved away from the city center would be in the community college population,” said Marielena DeSanctis, president of the Community College of Denver. “As the city center has gone through gentrification and rising housing costs, the people who are moving to downtown Denver have bachelor’s degrees, have master’s degrees, have PhDs, are pretty settled in the industries they’re in.”

Suburban and rural colleges have fared better, particularly Arapahoe Community College in Littleton, which gained 450 students (about 7%) between the start of fall semesters in 2020 and 2021. Several small schools on the Eastern Plains also increased enrollment in that time.

Colorado’s urban poor have left community college at the highest rates. Students eligible for Pell grants have declined by 23% the past two years and students who are the first in their family to attend college declined by 21% across the system’s 13 colleges. Male enrollment dropped by 20%, compared to 14% among women. The number of white students and students of color declined at similar rates.

“Across the board, the most marginalized students are the ones who have not come to college,” said Andy Dorsey, president of Front Range Community College in the north metro, “which is very concerning because those are often the students for whom college is the best return on investment.”

Not all degree paths have seen reductions. Overall enrollment is down at Pueblo Community College but career and technical enrollment is up 7%, according to the college’s president. Fewer students are seeking an associate’s of arts or an associate’s of science and going on to universities. More students are studying to be welders or computer programmers or health care workers. Others have left college altogether to take advantage of the tight labor market.

Students work on a writing exercise during a creative writing class taught by Brian Dickson on the Community College of Denver’s Auraria campus in Denver on Sept. 2, 2021.

“For a lot of students who come to school to improve their economic situation, they’re looking at their job prospects right now and saying, ‘Hey, this is great. I’ve never made $18 an hour before. I’m going to put off going to school,’” said Garcia, chancellor of the community college system.

“Some students still have unemployment benefits and some students have pretty good job opportunities right now,” Dorsey added. “Some of the job market is heating up. So, there are a bunch of factors that have come together to make this an unusual year.”

The enrollment declines bode poorly for the state’s goal of having 66% of adult Coloradans obtain a post-high school degree or certification by 2025. That number is at 61% with a few years to go, according to Angie Paccione, executive director of the Colorado Department of Higher Education, and community colleges need to graduate more students in order to achieve it.

Graduation rates fluctuate widely among schools in Colorado’s Community College System. Only 17% of students who enrolled at the Community College of Denver in the fall of 2017 graduated by 2020 but 58% of students at Trinidad State Junior College in southern Colorado did. Across the system, the graduation rate was 33% overall but 27% for students of color and just 17% for Black students.

“We could educate every white, middle-class kid in the state and we wouldn’t get to 66%,” Garcia said. “We’ve got to do better with the Black and brown kids, with the low-income kids.”

Students sing in a choir class lead by Megan Buness at the King Center at the Community College of Denver’s Auraria campus in Denver on Sept. 2, 2021.

The Colorado Community College System has received $355 million in federal stimulus money since the start of the pandemic, Garcia says. About $100 million filled gaps from state funding cuts and $95 million was for COVID impacts, such as personal protective equipment and building upgrades. But much of the money, $115 million, was for student aid and it fell on colleges to funnel that to students.

Front Range Community College used $3 million to forgive student debt and handed out $8 million in grants. This school year it must deliver another $16 million to students and has decided the grant process is too slow, so every student will be paid between $250 and $1,000.

“We decided to give money to every student enrolled this semester because the vast majority of our students have financial needs and that was consistent with what the federal government suggested,” said Dorsey, the college president.

At the Community College of Aurora, at least 75 students will be paid this semester and next semester if they stay in school with a C average or better as part of the school’s Return to Earn program. That program, funded by donations, will pay them between $500 and $1,000, depending on need, according to John Wolfkill, executive director of the Community College of Aurora Foundation.

At Pueblo Community College, a grant program from the U.S. Department of Education and student loan company ECMC provides emergency money of up to $500 to correct anything that prevents a student from learning, including car repairs. One student who commutes from Colorado Springs receives gas station gift cards, according to Monica Hardwick, director of financial aid at the college.

As the whole world was changing in the spring of 2020, the staff at Arapahoe Community College created a list of its students and their phone numbers, split the list up and called every student to ask what they needed.

They heard some were hungry. So, the school’s foundation bought grocery store gift cards and Lisa Matye Edwards, vice president of student affairs, sat with her daughter at their dining room table labeling the cards and sending them out.

They heard some students didn’t have the technology needed for online courses. So, Matye Edwards loaded carts of unused iPads at the college into her vehicle and gave her son, who was just learning to drive, hours of practice by driving her to meet students in parking lots and hand them free tablet computers.

Steven Mattson and his daughter Paisley, 3, pose for a portrait on the at their home in Colorado Springs on Sept. 2, 2021. Mattson is attending Pikes Peak Community College, working toward an associates in science. “It’s been challenging because everything is online and not going in person has made it harder,” Mattson said.

Steven Mattson, 31, is studying electrical engineering at Pikes Peak Community College in Colorado Springs. His wife is also in school and the two are raising two children, ages 12 and 3.

“With COVID and everything, money isn’t exactly coming in all the time,” he said.

Child care is hard to find in the area and is costly when it is available, but a grant covers the cost of his daughter’s care on campus. That keeps him in school.

“I have to go to Pikes just for the child care. That’s simply the reason I’m going to Pikes,” he said.

Sixty-eight kids stay at the campus’ child development center, which is operating at 35% capacity due to public health restrictions and staffing shortages, director Jennifer Hopper says. Federal and state grants keep costs low for parents attending classes at the college. The center’s waitlist has 167 names.

“Parents are tired. Parents are worn out. Just this last week we had to send two children home because they had COVID-like symptoms,” Hopper said. “We sent them home and both parents I spoke with were in tears and saying, ‘If this is how my semester’s going to be — I can’t go to class, I can’t get my homework done — how am I going to make it through this semester?’ They’re overwhelmed.”

Brittany Lee, 34, says she wouldn’t have been able to graduate from Arapahoe Community College and go on to Metropolitan State University of Denver without ACC’s child care center and grants that made it affordable. Once a week, she takes the staff coffee to thank them for watching her son, who is 3.

“It allowed me that leverage to put a bunch of classes on my plate, get them done and feel comfortable that my child was well taken care of,” she said.

Brittany Lee and her son Oliver Simons, 3, walk together in between portraits on the campus of Araphao Community College in Littleton on September 2, 2021. Lee finished a bachelors of general science in 2021 and will continue her education at Metropolitan State University of Denver for biology.

Paccione, who runs the Department of Higher Education, said she would like every campus to have a child care center where students studying education can gain experience and parents can leave their children. She called it “a moonshot goal.”

“Basic daily needs — transportation, child care, food insecurity, mental health issues — all of those things are taking precedence over educational opportunities that might be available to students,” Erjavec, the Pueblo president, said.

Every urban community college in the state has a food pantry, which was “unheard of 20 years ago,” according to Garcia. Pueblo’s typically helps 25 students but last spring that number was 99, according to director Toni Skilling.

The last 18 months have been unpredictable and Colorado’s community colleges hesitate to guess what comes next. Epstein at Pikes Peak Community College compares it to “a snow globe that we shook and we’re still all waiting to see where the flakes are going to fall.” Garcia said much depends on whether retention rates improve post-pandemic — whenever that is.

“If we bring students back then we’ll be able to continue to operate based on that increased revenue from increased enrollment,” the chancellor said. “But if they don’t come back, we’re still going to be struggling.”