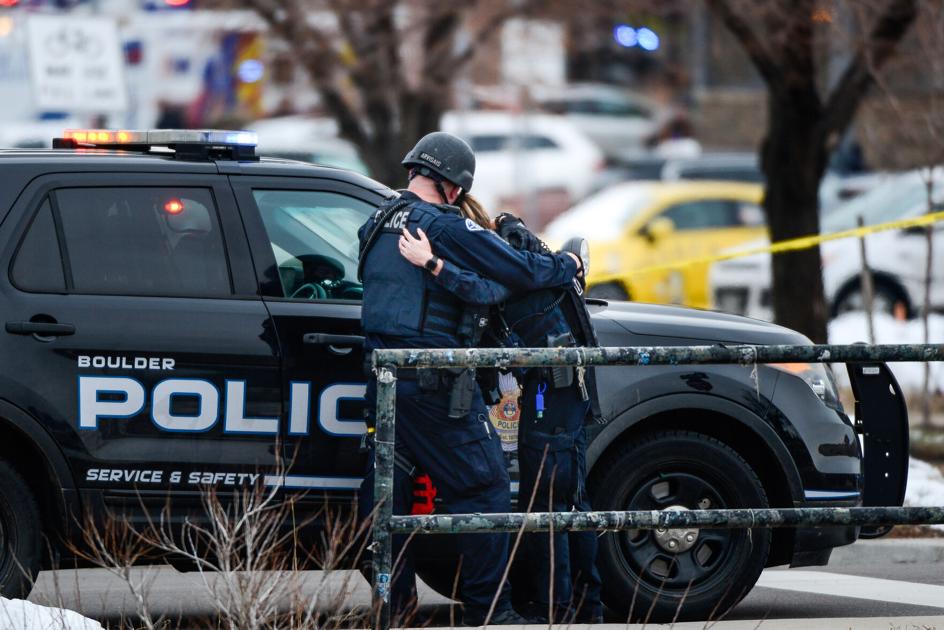 Colorado officials expressed anger and sadness Monday as details emerged about a shooting at a Boulder supermarket that left 10 people dead, including a police officer killed in the line of duty.

Authorities said a suspected gunman, who wasn’t identified, was in custody and being treated for unspecified injuries. A law enforcement spokesman said police were still investigating and didn’t have details on a motive for the shooting at the King Soopers store.

Gov. Jared Polis, a Boulder Democrat, said the state was making “every public safety resource” available to assist local authorities as they worked to secure the store.

“My heart is breaking as we watch this unspeakable event unfold in our Boulder community,” Polis said in a statement.

“I’m incredibly grateful to the brave men and women who have responded to the scene to help the victims of this senseless tragedy.”

U.S. Rep. Joe Neguse, who represents Boulder in Congress, noted that Monday’s deadly shooting was only the latest in a series of mass shootings in Colorado spanning decades.

“Today’s events are simply devastating,” the Lafayette Democrat said in a statement, adding that he and his wife were “heartbroken” and praying for the Boulder community.

Added Neguse: “It doesn’t have to be this way. There are steps we can take — and must take — to protect our community; common-sense, broadly supported proposals that will save lives. If we are truly invested in saving lives, then we must have the willpower to act and to pass meaningful gun reform. The time for inaction is over.”

U.S. Rep. Jason Crow, an Aurora Democrat who represents the district where the 2012 Aurora theater shooting took place, said on Twitter that he was “devastated” to hear about the shooting.

“My fellow Coloradans have navigated this situation far too often, including in the community I serve,” Crow said. “We are tired of living in fear. The victims and survivors will always have my thoughts and prayers, but they deserve my action. We need serious and effective gun violence legislation now.”

Their Republican colleague, U.S. Rep. Lauren Boebert, a staunch defender of Second Amendment rights and owner of a gun-themed restaurant in Rifle, called for Americans to come together.

“As we continue to hear the news coming out of Boulder, I’m praying for the police, first responders, and those affected by this tragedy,” Boebert tweeted.

“May God be with us as we make sense of this senseless violence, and may we unify and not divide during this time.”

U.S. Rep. Diana DeGette also called for unity but demanded change in response to the shooting.

“We can’t continue to live like this,” the Denver Democrat tweeted. “We have to do more to protect our communities from the constant threat of gun violence. We have to find a way to come together and collectively declare: Enough is enough!”

Democratic U.S. Sen. Michael Bennet used the same phrase in a statement offering condolences to the victims’ families and gratitude to those who responded to the shooting.

“As the investigation continues, we need to revisit a national conversation about gun violence that does not regress into partisanship,” Bennet said in a statement.

“It’s long past time for Congress to take meaningful action to keep deadly weapons out of the wrong hands. There are steps that the overwhelming majority of Americans want us to take. And they have every right to expect us to finally do something about gun violence in our country. Enough is enough.”

U.S. Sen. John Hickenlooper listed the locations of Colorado mass shootings and ended his statement with the same phrase invoked by his fellow Democrats.

“Our state grieves tonight as we mourn 10 more Coloradans senselessly killed by gun violence — including police officer Eric Talley. Our thoughts are with the victims’ loved ones, and we are grateful to the frontline workers and first responders whose bravery saved lives,” he said.

Noting that he is a two-time graduate of the University of Colorado at Boulder, U.S. Rep, Ed Perlmutter, an Arvada Democrat, said his “heart breaks for those impacted by today’s violence.”

“I want to extend my appreciation for law enforcement and first responders at the scene,” Perlmutter added. “Gun violence is becoming too common in our daily lives, and we must at all levels make the epidemic of gun violence less easy, less frequent and less deadly.”

U.S. Rep. Ken Buck, the other Republican member of Colorado’s congressional delegation to respond to Monday’s shooting, called the officers who secured the scene “true heroes.”

“My prayers are with the families of the victims of today’s tragedy in Boulder. I join the entire community of Boulder in grieving the senseless loss of life,” tweeted Buck, a Windsor resident who also serves as chairman of the Colorado Republican Party. “I am grateful for the officers who responded to the scene within minutes. You are true heroes.”