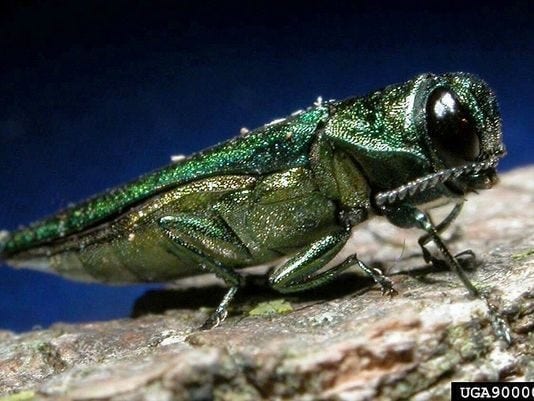 Emerald ash borer has made its way to Fort Collins.

Colorado State University entomologists confirmed its presence this week just outside Fort Collins’ northern city limits, according to a news release from the city of Fort Collins’ forestry office.

Emerald ash borer attacks both healthy and stressed ash trees, killing them within two to four years after infestation, according to previous Coloradoan reporting.

Immature beetles sprout from eggs laid on ash bark, burrowing into trees and feeding on the tissues that keep them alive.

Emerald ash borer was first confirmed in Colorado in 2013, in Boulder. It’s also been found in Broomfield, Westminster, Boulder County and most recently Berthoud.

A quarantine of firewood and other wood that may have been contaminated failed to stop its spread. Humans transporting infested raw material most likely brought the bug to Fort Collins, the city’s news release stated.

About 14 percent of all city-owned trees are ash, and they are popular on private properties throughout Fort Collins.

The city’s forestry department urges property owners to start implementing management plans. First, find out if you have any ash trees, evaluate the condition of each tree and monitor it throughout the year. Decide whether to have an infected ash tree treated or have it cut down.

VIDEO: Here’s what an emerald ash borer infestation looks like

The city has its own emerald ash borer response plan and has already begun working to cull some trees. It will begin treating select healthy ash trees in the spring.

The forestry department reminds residents to keep all ash material within Fort Collins to keep ash borer from spreading to other communities.

Fort Collins residents with questions specific to EAB management on their property should contact the City of Fort Collins Forestry Division, or a Fort Collins licensed tree care company listed at fcgov.com/forestry/arborists.

Determine if you have ash trees: Identifying features of ash trees include compound leaves with five to nine leaflets, leaflets, buds and branches growing directly opposite from one another; and diamond-shaped bark ridges on mature trees.

If you have an ash tree, start planning: Look at the overall health of your tree to determine if current or future treatment would be best, or if it makes more sense to remove and replace the tree with a different species. If you aren’t sure, contact a certified arborist. If you choose pesticide treatment, it must be done by someone licensed by the Colorado Department of Agriculture as a Commercial Pesticide Applicator.

Recognize the signs of emerald ash borer infestation: Look for thinning of leaves in the upper tree canopy, 1/8-inch “D”-shaped holes in the bark and vertical bark splitting with winding “S”-shaped tunnels underneath. Report suspect trees by calling the Colorado Department of Agriculture at 1-888-248-5535 or filling out their EAB Report Form at www.colorado.gov/pacific/agplants/eab-identification-and-reporting.

Beware of impostors: Other insects may look like emerald ash borer or cause similar tree symptoms. For more information, visit www.eabcolorado.com.

How to prevent further spreading of emerald ash borer: Don’t transport ash, any hardwood firewood, or any other untreated ash wood products to other locations.

Rebecca Powell is a content coach at the Coloradoan. If you know of an impactful story you believe needs to be reported, send it to RebeccaPowell@coloradoan.com. We can’t do the important work of keeping our community informed without you. Support the Coloradoan with a digital subscription.