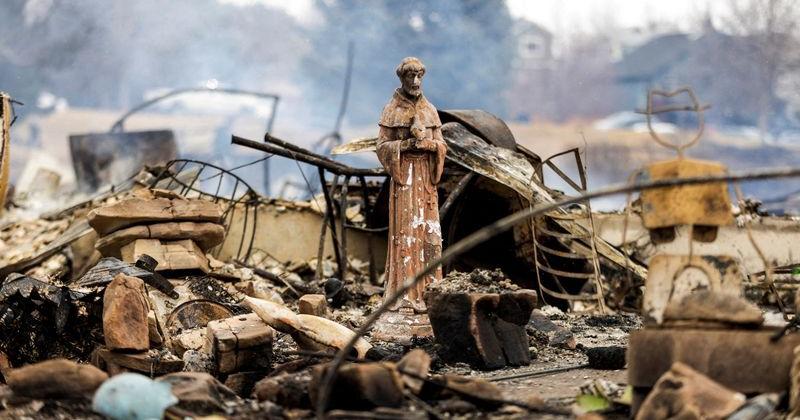 Colorado begins the first Sunday of 2022 with thousands of residents left homeless by fires that ripped through more than 6,000 acres of metro Boulder, fueled by hurricane-force winds. Most Coloradans know someone adversely affected.

It seems like a hard day to give thanks. It feels like a joke to count on a new year that begins so badly to ease the burdens of death, disease, and destruction that will forever define 2020 and 2021. We can choose morose bitterness and wallow in low expectations.

“When you have nothing left to burn, you must set yourself on fire,” said euthanasia advocate and atheist Jack Kevorkian, who died in 2011.

Rather than start the year with dark and sullen emotions, we can turn to the wisdom of every major world religion. Each tells us how good can and should evolve from the evil destruction of fire.

“Their work will be shown for what it is because the Day will bring it to light. It will be revealed with fire, and the fire will test the quality of each person’s work.” — 1 Corinthians 3:13

Scripture from an ancient Chinese Sutra translates to “merit is not burnt by fire, by wind too it cannot be broken asunder, and not by water be rotted, and it is able to sustain the world.”

A message attributed to Buddha says “neither fire nor wind, birth nor death can erase our good deeds.”

The Quran’s chapter 27, verse 8, implores “blessed whoever is in the fire and whatever is about it…”

It sounds sinister, almost callously lacking in compassion, to suggest good might come from wildfires that caused so much hardship one day before a holiday weekend.

Yet, throughout the ordeal, we saw local politicians, survivors and Gov. Jared Polis giving thanks for what they could only call a “miracle.” As the fires cooled and snow moistened the ground, they had three missing person reports related to the largest wildfire in Colorado history. That’s three too many, but the number could be in the hundreds

God works through humans, including the selfless emergency personnel who did their jobs and the people who took their advice to flee from danger. Homes and businesses can and will be replaced, for which we should rejoice.

In the meantime, those who have lost all material possessions will discover their true friends. They will experience the immeasurable joy that comes from the charity of strangers who appear like angels emerging from the ashes.

Polis, a Boulder native and resident, personally knows dozens of friends who lost their homes and all possessions — including photos and mementos that cannot be replaced.

He read an email a family sent to him shortly after learning they had lost all they owned. They were immediately thankful for their lives and the future that lies ahead. They had no intention of giving up and wallowing in loss.

“A house is made of sticks and stones and a home is made of love alone,” said part of the email, which the governor read on national television.

This is a time for all Coloradans to pull together and find ways to help those whose lives have been severely disrupted by an act of nature.

As implored by Romans 12:21: “Do not be overcome by evil but overcome evil with good.” Let’s get to work doing good by helping our friends, relatives, neighbors and strangers as they battle despair and embark upon rebuilding their lives.