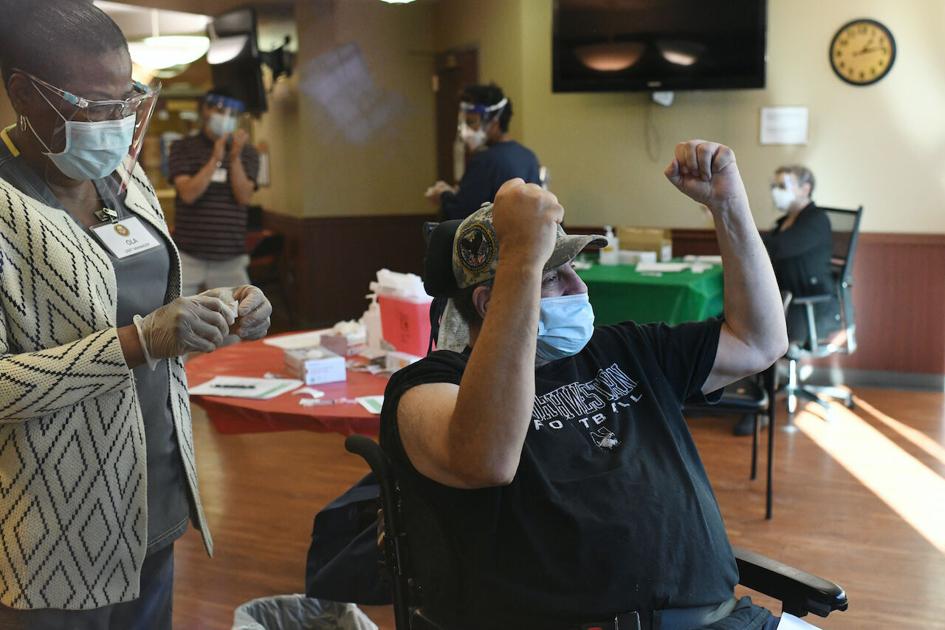 On a warm April morning, Mike Menard received the phone call from the Veterans Community Living Center at Fitzsimons in Aurora that he and his nine siblings were dreading: His father, 88-year-old Melvin Menard Sr., had tested positive for COVID-19.

The news sent the family into a whirlwind of emotions.

“I was heartbroken, I thought we’re not going to see him (again) and that this is it,” Lisa Phillips, his daughter, said. “The last memories of dad (are) going to be of him by himself with no family around, dying of COVID.”

But Menard, a Marine Corps veteran, beat the virus. On Tuesday, he was among the first residents at the Fitzsimons to receive the Pfizer COVID-19 vaccination.

The long-term care facility at 1919 Quentin St. received 100 doses for its 107 residents, who served in World War II, Vietnam and Korea.

Vietnam War Army veteran Phil Ross, 73, was the first resident at the facility to receive the vaccine. He called it a positive step in combating the virus.

“If it’s for the better good for our population, I’m game,” Phil Ross said through a glass panel while wearing a Northwestern University football shirt.

Facility administrator Kimberly Longe said the seven residents not vaccinated with the initial shipment will be getting their dosages when the second shipment arrives before the end of the year.

Longe said the beginning of the vaccination process brings a sense of hope to the 255 staff members, the residents and their familes.

“We’ve been through hell and back basically since March, so for (us) to have an opportunity to have a little ray of sunshine and hope is an amazing feeling,” she said. “This is truly the ray of hope we’ve been all waiting for.”

Gov. Jared Polis said it was the state’s responsibility to make sure aging veterans are among the first 40,000 Coloradans to receive the vaccine.

“With this rich history in the state of Colorado comes a responsibility to care for those who have served our nation, our veterans — especially our older veterans — in the face of a pandemic that has put them at the highest risk of becoming ill, or even losing the final battle against COVID,” Polis said.

Residents miss Western movie nights, group trips to the mall and embracing loved ones, said Maria Ross, who hasn’t hugged her husband Phil, in more than eight months. But they have exchanged texts and calls every day as she’s battled multiple myeloma at Fitzsimons.

“When we were younger, he’d tell me that there’s a guy over there that can dance instead of him, because he wasn’t that good,” she said. “It’s funny looking back at those memories, but I just can’t wait until I can see him and dance with him again.”

Lisa Philips and Ross on Tuesday called the vaccines a “Christmas miracle.”

“I don’t need a present under the tree now because I got it,” Phillips said of her father’s vaccination.