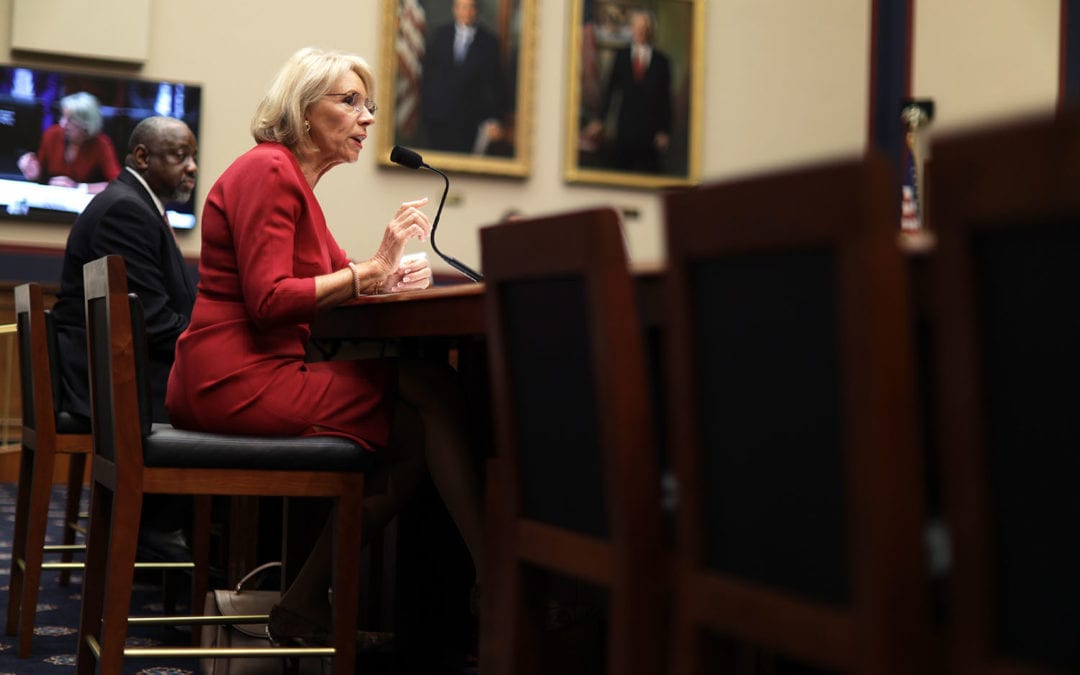 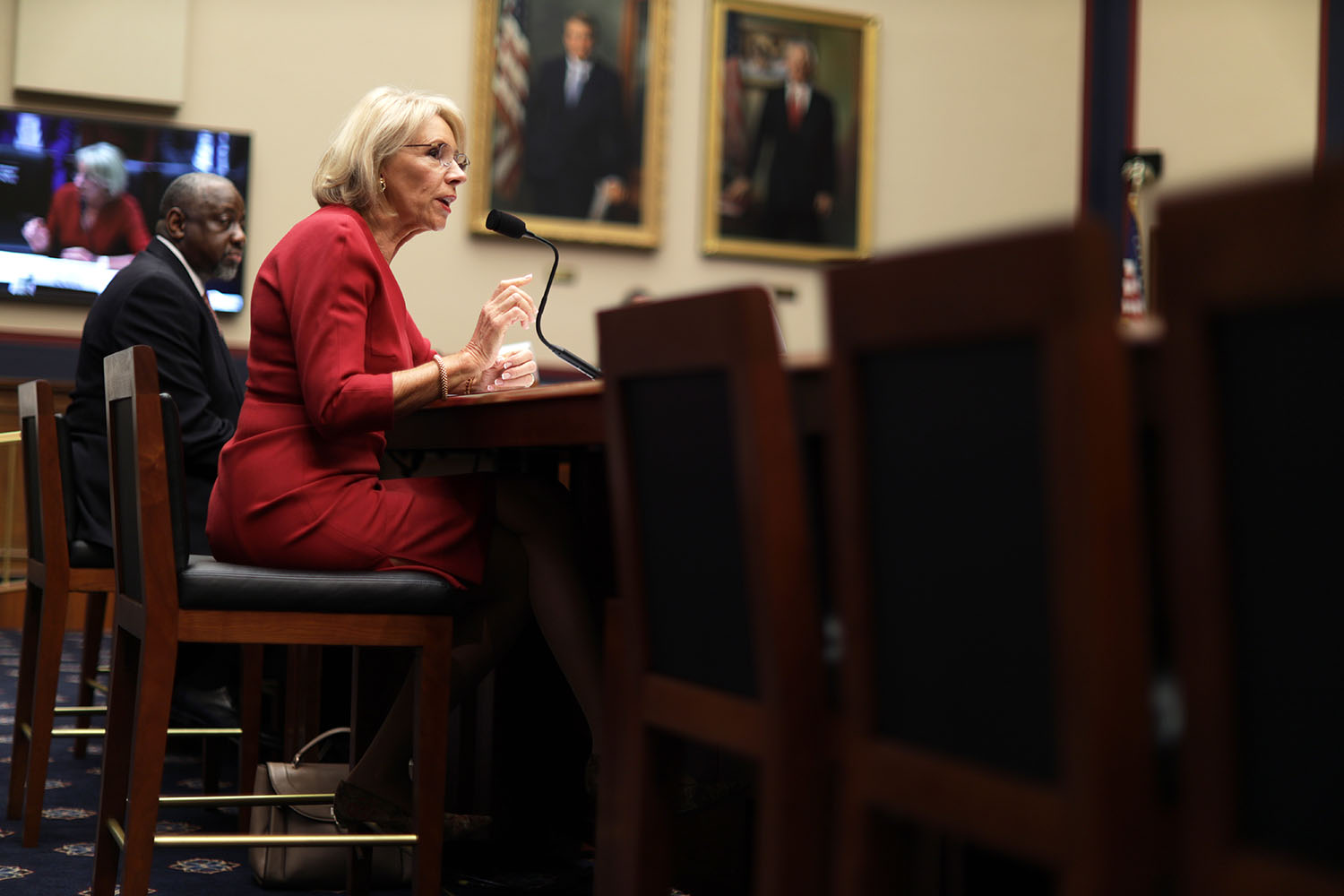 The Senate on Wednesday issued a strong bipartisan rebuff to Education Secretary Betsy DeVos, passing legislation to block her policy that makes it tougher for defrauded student loan borrowers to have their debts forgiven.

Ten Republican senators broke with the Trump administration and joined with Democrats on a 53-42vote to overturn DeVos’ rewrite of the Obama-era “borrower defense” rule, which governs debt relief for students whose colleges engaged in misconduct.

The measure, which cleared the House last month, now heads to President Donald Trump’s desk. The White House has threatened a veto of the legislation, which did not garner a veto-proof majority in either chamber.

But Trump told Republican senators during a closed-door meeting on Tuesday that he was “neutral” on the resolution, according to several individuals familiar with the remarks. During the meeting, Sen. Lamar Alexander, (R-Tenn.), the chairman of the Senate HELP Committee, told Trump that he opposed the resolution and was defending the Trump administration’s own policy.

“I have sort of a neutral position,” Trump responded, according to people in the room. “I’m in between.”

Trump told senators that he hoped that DeVos would be able to address any concerns with the rule. Trump later indicated that he actually was in favor of DeVos’ regulation after speaking with her on the phone, according to a Senate GOP aide.

A White House spokesperson did not dispute Trump’s remarks but pointed to the Statement of Administration Policy issued in February. The statement says that Trump’s advisers would recommend he veto the resolution. Asked for comment, an Education Department spokesperson pointed to the same statement.

Sen. Lisa Murkowski (R-Alaska), who voted to block DeVos’ rule, said that the Trump administration’s policy “makes it difficult for students to know whether they’ve been a victim of their college’s misrepresentation in the first place.”

“I worry this new rule may have unintended consequences in our efforts to hold fraudulent colleges accountable and protect student loan borrowers,” Murkowski said in a statement. “We need a policy in place that will allow defrauded students the chance to have their loan debt forgiven, while protecting good colleges and taxpayers.”

If Trump does not sign the measure, it would be only his seventh veto since taking office — and the first on a domestic policy issue. Previous Trump vetoes have been over disputes with Congress on war powers, arms sales and the declaration of a national emergency to build a border wall.

Still, the defection of a nearly a dozen Republican senators is a blow to DeVos, who has argued that her reforms are meant to make the loan forgiveness process fairer and less expensive for taxpayers, who end up picking up the cost of the loan forgiveness if a fraudulent school closes.

“It’s disappointing to see so many in Congress fooled by misinformation from the Left and the fake news narrative about our efforts to protect students from fraud,” Angela Morabito, an Education Department spokesperson, said in a statement responding to the vote. “Students, including veterans, who are defrauded by their school and suffer financial harm as a result deserve relief, and our rule provides them relief.”

Morabito added that that the DeVos rule “is consistent with Congress’s intent, it protects students, and it treats taxpayers fairly.”

Democrats were able to force a vote on the measure in the GOP-controlled Senate under the Congressional Review Act, a tool that allows lawmakers to block recently enacted regulations.

If Trump were to sign the legislation, the DeVos rule would be nullified, leaving in place the Obama-era standards. The Education Department would be prohibited from writing any new rule that is “substantially the same” unless Congress acts.

The House passed the resolution last month on a 231-180 vote with the support of six Republican lawmakers.

DeVos’ new policy, which is set to take effect July 1, sets more stringent standards for when the government will wipe out the debt of students who claim that they were misled or deceived by their college. The Obama administration initially wrote the regulation in response to a flood of claims for debt relief in the wake of the collapse of large for-profit colleges like Corinthian Colleges and ITT Tech.

Democrats argue that the Trump administration’s overhaul of the standards makes it too burdensome for legitimately defrauded borrowers to obtain loan forgiveness and protects for-profit colleges at the expense of students.

Sen. Dick Durbin, the No. 2 Democrat in the Senate, who is leading the effort to undo DeVos’ rule, said that the new policy is a giveaway to for-profit education companies at the expense of students.

“These for-profit colleges are the coronavirus of higher education,” said Durbin, of Illinois, a longtime critic of the industry. Durbin said that DeVos’ stricter standards for loan relief would make it “extremely difficult, if not impossible, for students to find relief.”

The Education Department estimates that its stricter rules will reduce loan forgiveness by hundreds of millions of dollars each year, saving taxpayers more than $11 billion over the next decade.

Durbin and other Democrats have peeled away Republican votes in part by focusing on how the new rule would affect student veterans, who have been targeted in the past by aggressive recruiting from for-profit colleges.

The American Legion and other veterans groups backed the effort to overturn the Trump administration’s rewrite of the “borrower defense” rule.

DeVos and some congressional Republicans, meanwhile, argue that the Obama-era standards were too permissive and unfair to colleges accused of fraud, as well as taxpayers, who are on the hook for the loans if the college can’t pay.

“The choice is between standing w/ students and taxpayers, or returning to a flawed, much-criticized Obama rule that puts community colleges & HBCUs at risk,” DeVos said on Twitter shortly before the Senate vote. “Our rule is simple: if you were defrauded & harmed, you get relief.”

DeVos previously said that the Obama-era rules were so permissive that they amount to a “free money” giveaway to students.

Congressional Republicans like Alexander have echoed those financial concerns.

“The Obama administration’s rules went too far and allowed borrowers to have their loans forgiven whether or not they had actually suffered financial harm,” Alexander said on the Senate floor on Tuesday. “Secretary DeVos’ new borrower defense rule restores the original intent of the law, that the borrower must be misled and harmed in order to receive debt relief.”

Juan Perez Jr. and Marianne LeVine contributed to this report.