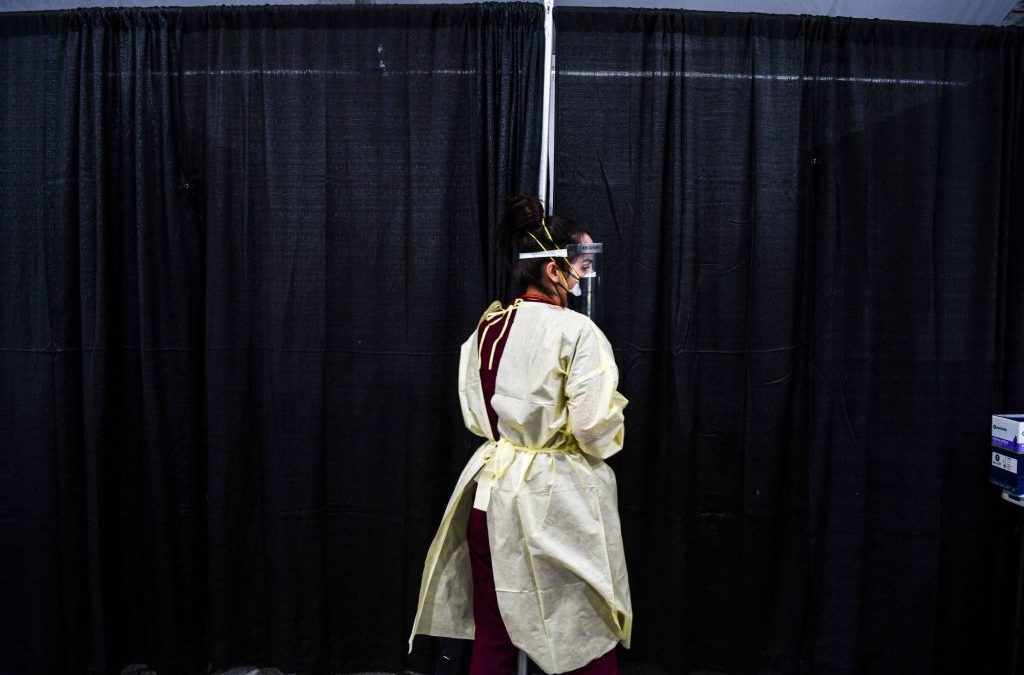 People who get COVID-19 have a treatment option that can significantly reduce their odds of hospitalization, but it’s not a substitute for trying to avoid infection in the first place through vaccination, doctors say.

Monoclonal antibodies can cut the risk of hospitalization by as much as 80% if taken in the first 10 days after symptoms start, said Dr. Lindsey Fish, medical director of Denver Health’s Peña Southwest urgent care clinic. That’s a significant improvement in the odds, but it’s still better to avoid chancing that you’ll be one of the smaller group of people they don’t help, she said.

Plus, the limited number of infusion centers in Colorado that can administer the treatment dictates how many people even can be offered the antibodies.

“Prevention is going to be more effective,” Fish said.

The drugs are based on antibodies that people produce in response to COVID-19 infection, but are mass-produced in a lab. Certain types of antibodies can block the virus from invading cells, so the idea is that treatment will give the immune system a head start and increase the odds the body can defeat the virus before it wreaks havoc.

Dr. Adit Ginde, an emergency department physician at UCHealth, described antibody treatments as one layer in overall protection against COVID-19.

The vaccine reduces the probability that a person will be infected at all, or that a vaccinated person’s “breakthrough” infection will be severe. If a person does get infected and is at risk for hospitalization, there are three antibody cocktails that lower the risk of hospitalization. One drug also can be used when a high-risk person is exposed, to decrease the odds of infection.

If a COVID-19 patient is hospitalized and requires supplemental oxygen, the National Institutes of Health recommend giving either the antiviral drug remdesivir or dexamethasone, a steroid that can tamp down an immune system overreaction. For the sickest patients, drugs to suppress the immune system are the only option.

Despite widespread enthusiasm, experts say there isn’t enough evidence for hospitals to use ivermectin — a drug designed to treat parasite infections — against COVID-19, though a trial at the University of Oxford to determine if it has any use against the virus is ongoing.

Of course, no drug is perfect, so skipping a critical layer of protection like vaccination based on the idea that antibodies or some other drug will save you isn’t wise, Ginde said. Both the vaccines and the antibody treatments were developed under the Trump administration’s Operation Warp Speed and authorized by the U.S. Food and Drug Administration, so it’s “not logical” to trust one and not the other, he said.

“It is not responsible, at this stage, to avoid vaccination and use this as a back-up plan,” he said. “Don’t roll the dice on getting sick.”

Initially, access to antibody treatments was limited, because drugmakers couldn’t produce them fast enough. The supply improved over the last few months, though there’s some concern it could become tight again because of demand in states dealing with surges, Fish said. The FDA recently ended a pause on use of the antibody cocktail made by Eli Lilly, after determining it worked well against the delta variant, so having a third manufacturer churning out the drugs should help, she said.

About three-quarters of people who tested positive recently are eligible because they’re 65 or older, have a medical condition that raises their risk of severe COVID-19, or have a body mass index classified as overweight or obese, Ginde said. While there are plenty of doses of the treatment now, space to infuse them is limited, so they reach out to the highest-risk patients first, he said.

“The issue is capacity,” he said.

It takes about 30 minutes to infuse the antibody treatments through an intravenous line, and patients have to be monitored for rare but potentially severe reactions for an hour afterward. Another option requires four injections, then a monitoring period. Generally, the infusion is considered the better option because the body may absorb more of the antibodies, but the injection has proven better for patients who are exposed but not yet sick, Fish said.

The state lists 30 registered infusion centers, but not all are providing antibody treatments. Infusion centers often treat patients who are at risk for severe COVID-19, like those getting chemotherapy, so a center would need a way to separate them before bringing in patients who are contagious with the virus, Ginde said.

Even if locations like hospitals can set up a separate area for COVID-positive patients, they then have to figure out how to staff it, Ginde said. Giving monoclonal antibodies can lower the odds a person will become severely ill — reducing the strain on hospitals — but it requires taking staff away from units that may have all the patients they can handle, he said.

“It’s where you put those resources in a system that’s stretched,” he said.

Another problem is that patients sometimes wait to get tested, thinking they have a cold that will pass soon, and don’t learn they’re eligible for antibodies until it’s too late for the treatments to work. Some of the people who are at the highest risk of severe COVID-19 don’t know about the treatment option, because those with more health conditions also tend to have less access to accurate health information, Fish said.

The Denver Health clinics reach out to qualifying people soon after they test positive, but those who don’t feel too sick are sometimes reluctant to get an unfamiliar drug, she said.

“The sooner you get this treatment, the better,” she said. “We just really can’t predict who’s going to be OK until they’re not OK.”