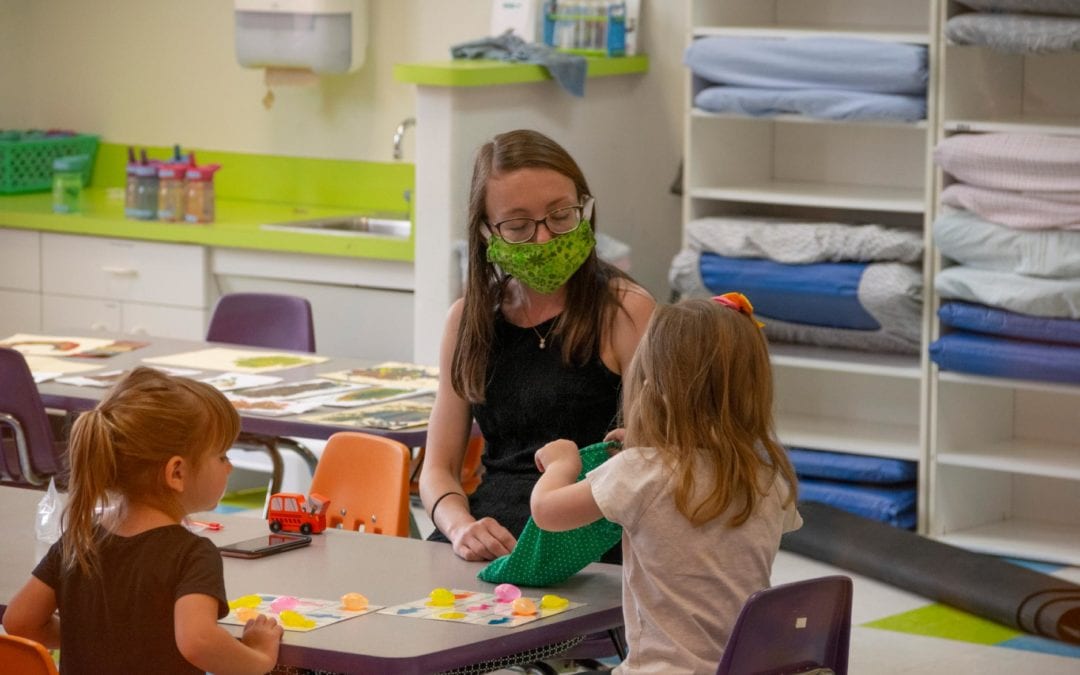 And as centers are forced to cut capacity and turn away families even as the economy reopens, those ripples are hitting the state’s workforce — especially working mothers, who still shoulder most of the child care burden.

Robin Sedillo, the owner of Once Upon a Childcare, said her two centers lost about 30 percent of their clients during the stay-at-home period.

State orders stipulated a capacity of just 10 children, when many of the center’s classrooms are built to accommodate as many as 30 kids.

So Once Upon a Childcare’s normal capacity dropped from 97 to 30 at its location on Garden of the Gods Road, and from 170 to 62 at its larger location on Vickers Drive. Attendance numbers dropped about 80 percent.

Additionally, the state order stipulated children could not move from one classroom to another, meaning centers could no longer combine classrooms for select periods of the day.

“Most centers combine similar age groups in the morning and at the end of the day help with overhead, but that was completely taken off the table,” Sedillo said. “So if we had four classrooms open and each of those classrooms had only one child in them, we had to keep all four of those staff members with their one child — which is really hard when it comes to wages, especially when we lost so much revenue.”

During the stay-at-home order and the state’s subsequent safer-at-home period, staff have worn masks, increased sanitization efforts and practiced social distancing. They’ve stopped using play items that can’t be sanitized in between individual uses and have prohibited group activities with children.

They’ve also done their best to follow CDC recommendations that say kids over age 3 should wear masks and social distance.

“So in addition to limiting our classroom capacities … we are supposed to keep children 6 feet away from one another — and that includes our babies who are crawling and walking,” Sedillo said.

“And that’s at rest time, snack time, lunch time and everything else. So that has been a huge challenge, because kiddos don’t understand why they can’t be by their friends.”

Along with all the new cleaning and social distancing practices, the business has faced staff shortages throughout the pandemic, despite maintaining all but four of its employees who were furloughed for personal reasons and caring for only a fraction of its usual capacity.

And conditions only worsened when the stay-at-home order expired, Sedillo said.

Families who had kept their kids enrolled during the stay-at-home period, even though they couldn’t attend classes, sought to bring them back to the center — but because of the new occupancy limits, Sedillo said she had to turn many of them away.

And funding sources that helped keep the business afloat during the pandemic have dried up — or soon will.

Funds from the Colorado Emergency Child Care Collaborative — through which the state paid for child care of essential workers in the stay-at-home period — was a lifeline during the shutdown. But the program ended May 24.

Sedillo said the federal Paycheck Protection Program has helped keep her staff paid so far, but the business has now sent its final paychecks using those funds.

Without government assistance, Sedillo estimates keeping the two centers at their current limited capacity would mean $63,000 in lost revenue each month — “absolutely unsustainable” in the long term.

“We would, unfortunately, have to pass that expense along,” Sedillo said.

In many cases, they’ve had to shut down entirely.

Before the pandemic, El Paso County had a total child care capacity of 22,146 kids. But that capacity has been slashed due to public health orders, and was decimated early on in the pandemic when many child care centers closed.

Citing predictions from the Colorado Children’s Campaign — a  Denver-based nonprofit children’s advocacy organization — Hurtado said the Centennial State could lose as much as 55 percent of its total child care access as a result of the pandemic.

Before COVID-19 hit Colorado, there were about 450 child care centers in El Paso County, she said. By late April, that number had dropped to about 120.

“We saw that [number of centers] go down quite rapidly within the first few weeks of the COVID outbreak, and now we’re starting to see some centers reopen,” Hurtado said. “But what we still don’t know yet is how many centers were lost, that weren’t able to weather that storm.”

And businesses in the child care market tend to operate on thin margins — often between 1 and 3 percent.

“So for them to be able to sustain a pandemic like this is highly unlikely, as we’re seeing with centers closing down,” Hurtado said.

With such limited capacity, Sedillo, of Once Upon a Child Care, said she’s already had to turn away families who’ve told her they cannot find care anywhere else in town.

That struggle plays out across El Paso County, Hurtado said, but it does seem to be concentrated in certain parts of town.

“We’re really drilling down on that data to find out where that is and why that is — but in general, many families find themselves facing a fairly significant decision if they’re unable to find child care,” Hurtado said.

“So we’re working hard to develop partnerships … and really reimagine what this child care system looks like locally so we can come out on the other side with a really strong system that can withstand any sort of future troubles that come our way.”

But reimagining the system won’t be quick or easy — nor will it be cheap.

“I think we’re going to continue to see this [problem] if we can’t get some funding structures outlined to support children and families through these centers,” Hurtado said.

“It would be really smart for us to be advocating on a federal level. I think that we’re definitely going to need some bigger dollars than we’re able to gain at the state and local levels, especially since there’s so much pressure on budgets.”

The crisis in child care capacity means tough decisions for working parents — particularly working mothers, who are disproportionately charged with child-rearing, even in households where both parents are employed.

Vanessa Munoz, a sociology professor at Colorado College with a research background in family dynamics and how they pertain to the workforce, said that as children get older, their mothers are more likely to work full-time — but the majority of moms with young children also work.

“When mothers have younger children, full-time employment goes down, but it’s still around 60 percent,” Munoz said.

“So the majority of mothers of young children are in the workforce in some capacity. This is really significant that these child care centers are closing.”

Without child care centers to accommodate their kids, many moms have had to juggle their regular work roles with full-time parenting while navigating the pandemic and working from home.

Adding to the burden for working mothers, Munoz said, is the fact that the majority of families rely on more than one source of care — and those have also been impacted by COVID-19.

“Often, parents are combining these centers with family care with grandparents,” Munoz said. “Grandparents are a huge source of care. So this is sort of unprecedented in that we have child care centers closing down, and then we have this virus that we believe is more dangerous for people who are older. And most grandparents are going to fall in that category. So child care arrangements, I think, are being hit in two senses. It’s really unusual you would have those things happening simultaneously.”

Another problem: Many women who run their own businesses (about 35 percent of all U.S. firms are categorized as women-owned, according to the U.S. Census Bureau) do so in sectors heavily impacted by the coronavirus.

“The majority of them are in the health care and social assistance sector, the educational services sector, and then other services,” Munoz said. “So you’re seeing a lot of women both in the service sector and in health care, and the service sector is being hit really hard right now with a lot of the closures.”

And while school’s out for the summer regardless of the pandemic, if schools stay closed in the fall, the obstacles will pile up for working mothers with more than one child.

“But now, these mothers would be having the high schooler, the middle schooler and … the child under three, and they’re all requiring some amount of care,” Munoz said. “And then you’re layering on top of that any stress that people might be feeling about what’s happening globally.”

For the parents who can get a child care slot for their kids, any hit to their employment could hinder their ability to afford care.

“If you look at the cost of childcare, for many who earn minimum wage, it’s already almost one parent’s entire earnings,” Munoz said. “For many working families, any loss of income or instability is going to mean you can’t afford child care anymore. So having something like this that’s so prolonged and impacting so many families, I think parents are going to have to start to make hard decisions about how they can participate in the workforce.

“This is going to hit the lowest earners the most. And also single parents, who tend to be mothers more than fathers.”