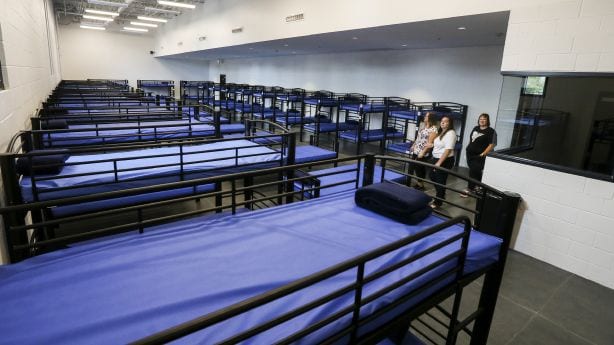 SALT LAKE CITY — After months of keeping COVID-19 mostly at bay, Salt Lake County homeless centers are seeing another spike in cases — along with other areas in the state of Utah.

The outbreak in the county homeless population comes the same week the state of Utah has seen a streak of record-breaking days for COVID-19 cases, the latest record high on Friday with 1,411 confirmed cases.

“Whenever we have an increase in cases in the community as a whole, we’re going to most likely see that extend into subgroups and into other populations,” Nicholas Rupp, Salt Lake County Health Department spokesman, said Friday. “And that’s especially concerning when we see that happen in vulnerable populations … (like) people experiencing homelessness.”

Rupp said it’s “not unexpected” that COVID-19 would find its way again into homeless shelters as the state as a whole experiences a spike, “but of course it’s concerning.”

“It’s an artifact of increased cases and increased transmission in the community,” Rupp said. “The resource centers are doing everything they should be — they’re working hard to protect this population.”

It’s not the first time a large number of homeless individuals have tested positive for COVID-19 in a short amount of time since the beginning of the pandemic — but it has been months since. In April, 94 men staying tested positive at the 300-bed South Salt Lake Men’s Resource Center, 3380 S. 1000 West.

Just as officials did in that outbreak, the 200-bed mixed gender Gail Miller Resource Center is now not accepting new clients, and all clients who were exposed to COVID-19 were offered beds at Salt Lake County quarantine and isolation facilities, which county officials have declined to disclose. Some clients staying at the resource center who were not determined to be exposed to the virus were permitted to stay, according to Rupp.

A “handful” of Gail Miller Resource Center homeless clients who were offered a stay at a quarantine and isolation center “chose not to take advantage of that opportunity,” Rupp said. They weren’t allowed to stay at the resource center, so they left — and it’s not clear where they decided to go instead, whether it was with a friend, a family, or on the streets.

“But everyone was invited to take advantage of alternative options at the quarantine and isolation facility, so no one was turned away from receiving services,” Rupp said.

As of Wednesday, Salt Lake County had administered 3,238 COVID-19 tests to the homeless population since the start of the pandemic, according to the county’s weekly homelessness report. While 93 came back as active positive cases this week, 259 are considered recovered.

According to that weekly report, a total of 905 guests have stayed at Salt Lake County quarantine and isolation facilities. Of 1,517 total hospitalizations throughout the pandemic, 41 (or 2.7%) were experiencing homelessness. Of all current hospitalizations, none are homeless, according to the report.

The “silver lining,” as Salt Lake County Deputy Mayor Erin Litvack put it when she briefed the Salt Lake County Council on Tuesday, is large testing events at other homeless resource centers including the Geraldine E. King Women’s Resource Center have not returned positive results.

“So we’re monitoring the situation closely to get it under wraps as much as possible,” Litvack said.

As Utahns continue to grapple with the pandemic and this week’s record-breaking spike, he urged Salt Lake County residents to keep in mind homeless individuals as a vulnerable population, with many who have preexisting health conditions and are more at-risk for negative impacts from the virus.

“People experiencing homelessness deserve our protection, just like our grandma and those vulnerable people in our lives that may spur us to be more cautious and wear our face coverings,” Rupp said. “Our motivation for following recommendations is to protect our loved ones, people around us who are vulnerable, and that includes our homeless friends and neighbors.”