County closes all roads amid storm in Colorado, some motorists stranded throughout state | OutThere Colorado 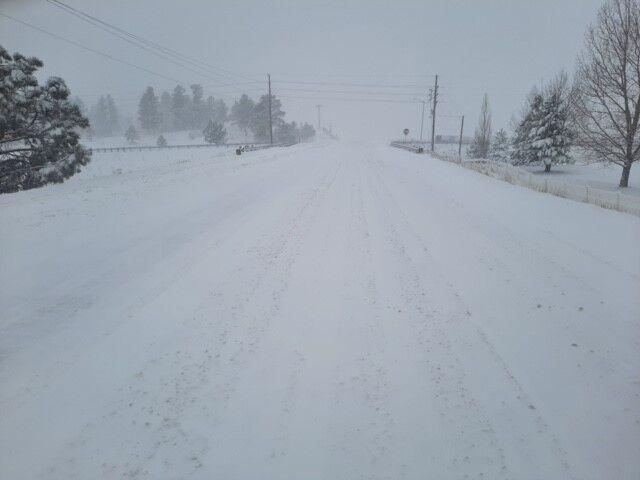 Heavy snow and blizzard conditions has shut down all roads in one county in Colorado, while in other parts of the state motorists are being rescued from their stuck vehicles.

Elbert County announced on Twitter all roads are closed for dangerous driving conditions.

All County Roads are closed effective immediately. Please stay home and stay safe. Roads are being monitored consistently and will be reopened when travel is safe.

Cities and towns within Elbert County include Kiowa, Agate, and Elizabeth. The roads shut down through this county include a nearly 150-mile stretch of Interstate 70 in eastern Colorado. Other major roads closed surrounding the area include U.S. 287, CO-94, and U.S. 24.

Vehicles are becoming stranded as motorists are rescued along E470 near Aurora, and U.S. 6 and CO-119 through Clear Creek Canyon in northern Colorado. Aurora Police Department reports 25 to 30 vehicles are stuck on E470.

I’m over here on Smoky Hill rd. The E470 corridor is a nightmare. Stay away and stay in @AuroraPD is out here helping stranded motorists. Saw a pickup truck and a plow stuck. pic.twitter.com/WEmln29QbQ

PHOTO: These are the folks that our SWAT Team rescued out on 64th Ave and Piccadilly in northeast Aurora. They are warming up in the back of our BEAR and on their way to shelter. #WinterStormXylia #StayHomeAurora pic.twitter.com/DRPrD7bZ1J

We are responding to a bunch of stranded people in their cars throughout the county. Please, please stay home. One of our deputies and a CDOT plow driver even had problems. If you do find yourself stranded please call our non-emergency line at 303-660-7500. #dougcoundersnow pic.twitter.com/Z2BabyQJcI

Colorado Department of Transportation and other state officials and meteorologists are strongly urging people to not travel unless it’s an emergency as the winter storm moves along the Front Range into Monday.

Farther north, blizzard conditions have halted all operations at Denver International Airport Sunday evening. The road from the airport to downtown Denver, Peña Blvd, is currently impassable with multiple stranded vehicles along the roadways.

The National Weather Service reports a strong band is likely to keep producing heavy snow at 1 to 2 inches per hour near Fort Collins through Boulder and the entire Denver metro area and Palmer Divide.