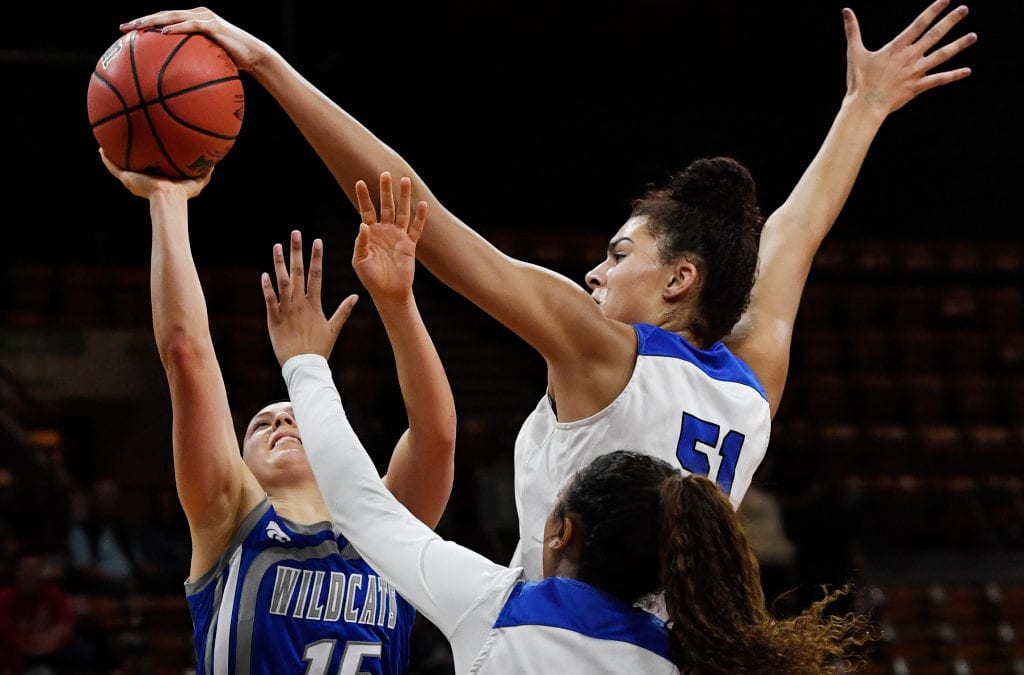 Nice work, if Colorado prep athletes could actually get it.

According to experts, Lauren Betts’ Instagram feed, all by itself, could already be worth $5,678 in potential yearly endorsement revenue. And each post the Grandview High School girls basketball senior-to-be and Stanford commit puts up on the platform endorsing a specific product or company could be worth $43 apiece — and likely more.

“As athletes, (we) don’t have the same amount of time as regular students do to make decent money,” Betts, the No. 1 girls basketball prospect in the country for the Class of ‘22, told The Post. “The money earned is worth the amount of time (we) put in the gym.”

In a few days, collegiate student-athletes for the first time will be able to profit off their name, image and likeness (NIL). At least six states — Alabama, Florida, Georgia, Mississippi, New Mexico and Texas — have signed NIL laws that go into effect Thursday, July 1. Gov. Jared Polis in March 2020 signed a bill that would extend NIL rights for in-state collegiate student-athletes starting Jan. 1, 2023.

The traditional definition of amateurism, the bedrock of the NCAA’s ecosystem, took a big hit this past Monday when the organization landed on the losing side of a 9-0 Supreme Court decision in NCAA vs. Alston.

The tide behind institutional control of student-athletes’ earnings is turning. Fast.  Given that collegians can capitalize on their NIL opportunities, could high-school athletes — such as Betts — be next?

“Any restrictions of these opportunities, we feel like, is being a bad actor in this space,” said Sandeep Hingorani, executive vice president and co-founder of BallerTV.

“Especially when you consider some of the comments made by the National Federation of State High School Associations (NFHS), hearing some of those same (comments) we heard from the NCAA all through the years, (how) ‘the purity of the game needs to preserved.’ What does that really mean?”

Hingorani’s company is already pushing the envelope and pushing it locally. Last week, BallerTV announced it was producing a non-fungible token, or NFT, of Denver Prep Academy standout basketball transfer Baye Fall and his performance at the Pangos All-American Camp earlier this month.

BallerTV said it will give the proceeds of sales — the prospect’s NFT was going for $199 as of Friday morning — to Fall upon his graduation. The 6-foot-10 center can keep the money or donate it to a school, charity or organization of his choosing.

Hingorani noted that digital products such as NFTs could fetch as much as 10 or 20 times their original price, depending on the player and the scarcity.

“We just did that one event,” Higorani said. “There’s open blue water ahead, in terms of ways in which (prep athletes) can monetize their NILs.”

And maybe choppy waters, too.

“We’ve got to protect these kids”

Karissa Niehoff, executive director of NFHS, senses where this is going, too. And the head of the federation has been outspoken for more than a year against NIL opportunities trickling down to high school sports.

“We don’t have our heads in the sand,” Niehoff told The Post last week. “We are trying to protect the high school experiences, the high school environment and all that high school sports are supposed to be for everyone on a team.”

Niehoff has decried prep student-athletes marketing themselves as anathematic to the model of amateurism espoused by the NFHS. She also admits that while the NFHS has lobbying power, it doesn’t carry the same enforcement chops that state governments or CHSAA would have at the local level.

“If state legislatures draft high-school-aged kids into the same opportunities as college kids, that will be very hard to fight, because it’s tough to go against state law,” Niehoff said.

“We’ve got to protect these kids … if they’re not carefully guarded and well-coached in all facets (of the business side), this could be big trouble. I don’t believe 13-year-olds should be a free-market commodity. I really don’t.”

It’s a sentiment shared by high school coaches, who fear the logistical and chemistry headaches of a roster in which some players have found a market for their NIL while others — the vast majority — won’t.

“If it does come to our level, I think it could carry a big can of worms,” longtime Regis Jesuit girls basketball coach Carl Mattei said. “Just let the kids be kids.

“You’re dealing with adolescents. Once they think they’re bigger than the game …  now you’ve got their parents, you’ve got their club coach, you’ve got their personal trainer, you’ve got all these people in their ears, blowing smoke … and they want to be there when that kid is 14, 15, 16. Ultimately, (that) kid would be leaving Colorado. They’d be gone to a state that can substantiate the money that it would take to keep a kid there. Our state doesn’t have that.”

“The big loser is the student-athlete who gets money who is not emotionally mature enough to understand that if he or she continues to work hard, that there’s going to be more of that, as opposed to, ‘Now I’ve arrived,’” Domann said.

“You might get a guy who gets $100,000 or $200,000 in college who won’t make it to the pros and prior to these (NIL) rules might have made nothing in college and made millions in the pros. I call it the ‘Hungry Dog Principle.’ One of my buddies (calls) it the ‘Small Stomach Syndrome.’ The ‘Small Stomach Syndrome’ is when you get a little bit of your fill and you don’t keep working hard. The ‘Hungry Dog’ is when you get a chip on your shoulder and feel like you don’t get what you deserve, and you work even harder to try to become better.”

“Leading us in this direction”

So what happens when some athletes can start feasting at an earlier age? As part of the NCAA’s proposed NIL framework, originally obtained last fall by Sports Illustrated, prep recruits could enter NIL agreements in high school and maintain their collegiate eligibility if those details are disclosed to the university before they sign their letter of intent.

“The way social media works these days, where absolutely anyone could make money as an influencer, I think it’s only fair that high school student-athletes would have the same opportunities,” said Betts’ mother, Michelle, a former collegiate volleyball player at Long Beach State.

“We could see issues with alumni, college coaches and agents procuring endorsement deals for athletes in order to get that kid to commit or get that kid as a client. I’m sure some regulations would have to be made to prevent that from happening. The times are leading us in this direction. And to deny the student-athletes the opportunity to earn money like everyone else can just doesn’t seem fair.”

According to a recent estimate by AthleticDirectorU and Navigate Research, collegiate athletes could project an earning potential via social media at a rate of roughly $0.80, on average, per Instagram follower. The same study spit-balled a fee for promotional Instagram posts at $0.006 per follower, or $6 for every 1,000 impressions.

When applied to Lauren Betts’ account, that comes out to roughly $5,700 as a base and $43 per sponsored post.

Again, it wouldn’t be worth a lot. But it could be worth something.

“I would definitely be interested, but neither myself nor my friends have ever talked about it before,” the 6-foot-7 Grandview headliner said. “Now that it’s becoming a possible option, I think lots of people would want to do it. I wouldn’t want to put myself out there to the point that people got tired of seeing me.

“I also would want to make sure it didn’t cause me to lose focus on school and basketball.”