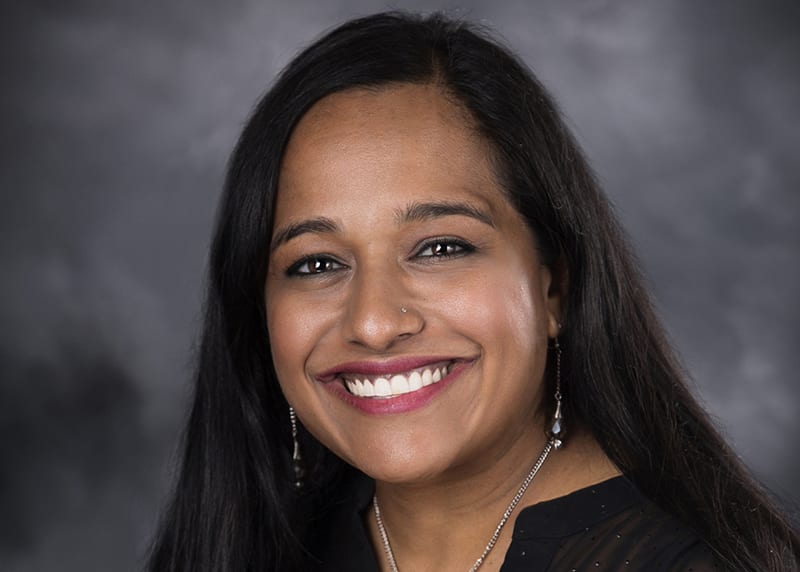 For Aikta Marcoulier, taking the reins as executive director of the Pikes Peak Small Business Development Center was a “total step out of the comfort zone” — but finding success in unexpected places has been a pattern throughout her life.

The daughter of two physicians who moved from India to the West Indies to Illinois, Marcoulier was born in the Chicago suburb of Des Plaines and grew up in Iowa, where her mother had her own practice.

Marcoulier stayed in Iowa for college, but she didn’t pursue medicine.

“I was interested — and how do we put it nicely? I failed all my classes in college,” she said. “I’m not shy about talking about it. It wasn’t my thing. I did horribly. I decided that wasn’t for me. After I failed miserably at everything pre-med, I became an economics major — and it all made sense again. It totally clicked.”

Discovering economics was far from the last twist in the path Marcoulier had laid out.

She was all set to be an investment banker. The life-changing moment came, she said, when she went to stay with friends in New York City so she could hit eight job interviews in four days.

“I was interviewing down by the towers on 9/10, and 9/11 was going to be my fun day because I was flying out on the 12th,” she recalled. “And then my friend says, ‘Oh my gosh, my mom said turn on the TV. You’re not going anywhere.’ … And so we saw on TV, the first plane had hit. Their apartment was like 3½ miles away from the towers. We went to the roof and we saw both towers fall. And this lady dropped her knees and was crying hysterically because her husband worked down there. … We saw this happen and my friend’s like, ‘It’s got to be a terrorist attack.’ …

“We remember a lot of turning points growing up. But that was the one that — you grow up really fast because everybody around you thinks you’re a terrorist. If you’re East Indian of any sort — doesn’t matter if you’re Saudi Arabian, Indian, Pakistani. There were people on the news saying, ‘I don’t care who you are — if you’re from anywhere in those countries, we think you’re a terrorist.’ It was major ignorance that came out — out of fear. We tied the American flag on our bags when we were walking around because I’m like, ‘I was born Chicago, I was born here, I’m as American as you are.’ But people didn’t think like that. I was profiled getting onto airplanes for at least another year. … And so you think of that life changing moment when you learn about ignorance, you learn about racism — but then you also learn that fear creates a lot of bad things in people. You learn a lot real quick.”

Marcoulier’s parents had moved to Colorado Springs by then, and she moved in with them for six months, working as a fitness center clerk at Cheyenne Mountain Resort “because I could not find a job.” After a while she “fell into sports,” working for the Native American Sports Council, followed by more than 8 years with Professional Bull Riders, helping build the sponsorship department. Her job with what would become Pikes Peak SBDC was another pivot.

“The posting said it was business development,” Marcoulier recalled, “and I’m like, ‘I’ve done business development, that’s what sponsorship is.’ Oh, I had no idea. I didn’t have a lick of knowledge about small business. And I was in the second set of 100 people applying.”

After four rounds of interviews, Marcoulier was hired for her ability to raise sponsorships and awareness, build programs and “run a good show.” Eight years later, she’s still in her element.

What do you want people to know about the SBDC?

We want people to know that our strategic development experts are at a very high level. We have [business community infrastructure and customer-focused strategic consulting expert] Loren Lancaster; we have a lead veterans consultant that was a manager for equity investors, we have technology experts, we have small business innovative research grants, tech commercialization, cyber educators. We have very high level subject matter experts here. And so we’re really good at helping people who are: ‘I’ve been in business for a long time and I need strategic development to keep it moving forward.’ We do a lot of startup stuff too, which is important. … There is not one industry or one topic we don’t cover.

[Colorado Springs Leadership Institute] taught me that I am more sensitive to people’s feelings than I thought I was, because I’m very — I don’t like big crybabies. Don’t crybaby about stuff that can be fixed. Think bigger at all times. Think beyond our means — what’s the next step? You don’t just drop it; you always think bigger. You always think about not your day-to-day but, ‘OK, what would the mayor think about what we’re doing? What would our funders and stakeholders think? What are their objectives — and are we meeting them?’ My sponsorship brain comes into effect. … Leadership style: I have very little patience for ignorance. Once you’re told something, I expect it to be done. I push everyone to the limits until they say, ‘We can’t anymore.’ I have lots of big ideas, so somebody needs to tell me to stop when they can’t. … One other good piece of advice was from Randy Bernard, who was CEO of Professional Bull Riders at the time. He goes, ‘I don’t care if you screw up. Just don’t make it a surprise for me.’ So I love people saying, ‘You know what, I didn’t get to it. I kind of screwed up on that one.’ I’m OK with that. I don’t yell at people. But I am really in your face — if you screwed up you’re going to know about it.

Tell us about the best advice you’ve received.

Jen Furda has helped a lot of young leaders. My first time speaking, it was just normal Aikta, like: ‘Blah blah, blah. I don’t know what I just said but it turned out OK.’ Jen said, ‘Never forget who you are. Be yourself. You’re not a formal speaker. Never change who you are.’ I just have fun up there, and I said, ‘I don’t wear a suit.’ She goes, ‘Then don’t wear a suit. Who cares?’ … That was pretty awesome. [UCCS] Chancellor [Venkat] Reddy, when he was my boss at UCCS for a little bit, he told me, ‘There’s going to be times where you just want to throw up your hands and you’ll get very frustrated. Just leave. Just leave, just say you’ll be back. Leave the office, it’s no big deal. Just drive up Garden of the Gods, go to the top of whatever mountain and sit there and just reflect on all the good stuff you guys are doing. … When you’re just fed up, leave and think about all the good stuff.’ I still think about that advice all the time.

Join Phil Long Dealerships and the Colorado Springs Business Journal for the 2020 COS CEO Leadership Lessons with Aikta Marcoulier, 4:30-6 p.m., June 10, online via Zoom. A portion of the proceeds go to the 2020 Give! Campaign. Sponsors also include Amnet and Stockman Kast Ryan + Co.