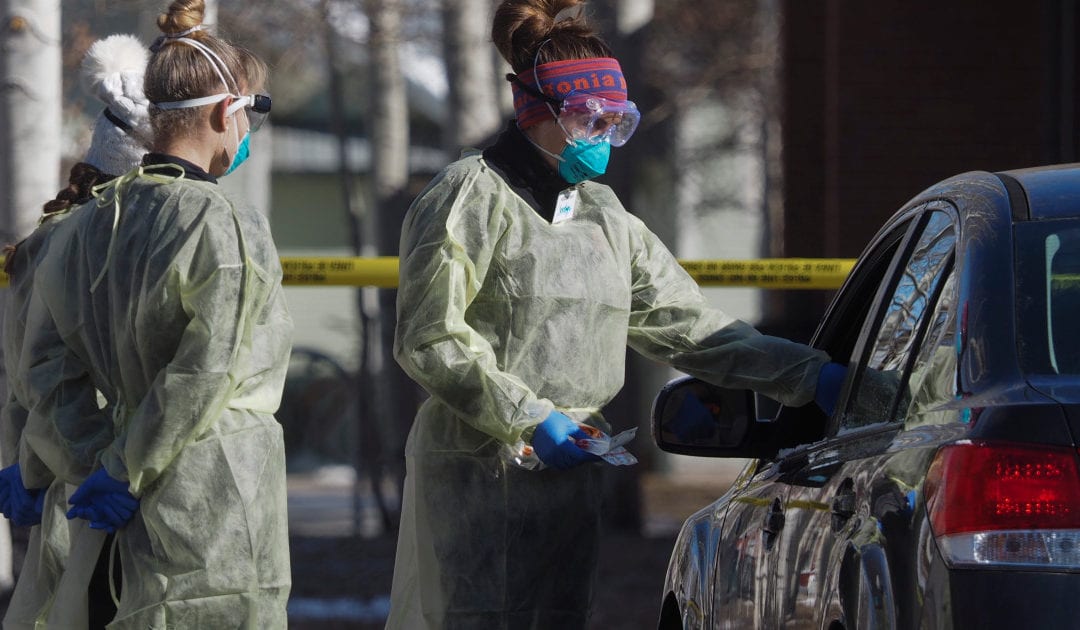 They call it a citizen epidemiological project.

As COVID-19 testing across the state and nation focuses on the already ill or high-risk workers, a grassroots program from Eagle County is taking root across Colorado as more communities enlist citizens to self-report their symptoms. With real-time citizen reports aligning with lab-confirmed test results, local health officials are using Eagle County’s community monitoring dashboard to track the spread of COVID-19 and identify trends that reach beyond testing in their communities.

The open-source template provided by Eagle County Public Health and Environment’s epidemiology and innovation teams has been deployed in Summit, Pitkin and Larimer counties, and more municipalities are exploring the system as laboratory testing for COVID-19 lags.

Some counties — including Gunnison, La Plata and Archuleta — are simply asking citizens to self-report symptoms using anonymous online forms, giving local health officials information to help combat the contagion. The submission forms comply with federal patient confidentiality laws, so health officials are able to reach out to people who report dangerous combinations or severity of symptoms.

Eagle County launched the dashboard on March 17 as the Eagle Valley emerged as a hotbed for COVID-19. Hundreds of citizens responded, giving county health officials immediate direction as test results were delayed by 10 days or more. Chandler-Henry said the dashboard has fostered trust, transparency and timeliness in the county’s response to pandemic.

“In the early days, people didn’t really trust what was coming from the government,” she said. “They were seeing mixed messages from state and federal leaders and having this real-time data really helped us build trust.”

The real-time and raw data are assuring Eagle County residents that the danger is real and mitigation is needed, Chandler-Henry said. She sees the dashboard as another example of the county not waiting for state or federal solutions to urgent local problems, not unlike the marijuana tax voters approved in November to fund mental health services.

“We can’t wait and we have issues we need to deal with and let’s figure out something,” she said.

The initial surge of citizen reports in Eagle County showed the onset of symptoms peaking between March 10 and March 12, and a decline in symptoms after that.

“We are cautiously optimistic that our social distancing is working,” Eagle County Public Health and Environment epidemiologist Becky Larson said in her weekly video report from March 26. On April 6, Larson reported that while the onset of confirmed cases appeared to be decreasing, the county still had more than 400 tests pending, “so it’s a little early for us to say ‘Yes we are definitely decreasing.’ However we are very optimistic and our goal is zero cases.”

In the two weeks after launching the same dashboard in Summit County, residents have filed  more than 1,460 forms detailing ailments from coughs, headaches and fevers to shortness of breath, muscle aches and sore throats. The citizen data showed a peak of symptoms starting around March 16 and declining since then.

The surge in responses shows a high level of engagement by Summit County residents who want to help control the spread of COVID-19, county spokeswoman Julie Sutor said.

Like everywhere else in Colorado, a shortage of testing kits in Summit County meant local testing results were limited to people in the hospital, critical workers and people enduring a serious illness. Having a tally of local citizens reporting symptoms “gives a better appreciation of the order of magnitude of respiratory illness in our community.”

Of course not all of the 1,440-plus reports of flu-like symptoms in Summit County are COVID-19, but the wave of symptoms gives local health officials “every reason to believe that a significant portion of that number is likely to be COVID-19,” Sutor said.

“This fills a really important void for us in terms of understanding illness that is circulating in the community. It certainly isn’t statistically valid or a scientific analysis, but in the absence of anything else, it’s really important to have something,” she said. “We think this demonstrates the importance of social distancing and lets the public know that illness is out there.”

A spokeswoman with the Colorado Department of Public Health and Environment said the dashboards can help local health officials track COVID-19 among people who may not need to get tested or are unable to get tested.

“This could help public health professionals and policymakers identify potential hot spots not captured by testing,” the spokeswoman said.

That’s how the dashboard is helping in Pitkin County, where health officials are not using the citizen reports to track the growth of COVID-19 as much as identifying patterns of illness in the community, said Bill Linn, the spokesman for the county’s Incident Management Team.

With the granular breakdown of symptoms, public health workers can see where in the county the illness may be moving. Health officials in Pitkin County, for example, have tracked reports of common symptoms to high-density housing projects, and they targeted social-distancing messaging in those neighborhoods.

“It has allowed us to reach out to specific communities and help to tamp it down as best as we can,” Linn said. “We think this helps people take this more seriously. All the sudden, they are going ‘Wow, people have symptoms in my neighborhood.’”