Coronavirus hit hotels hard, but it didn’t stop a Colorado Springs couple from opening a new one 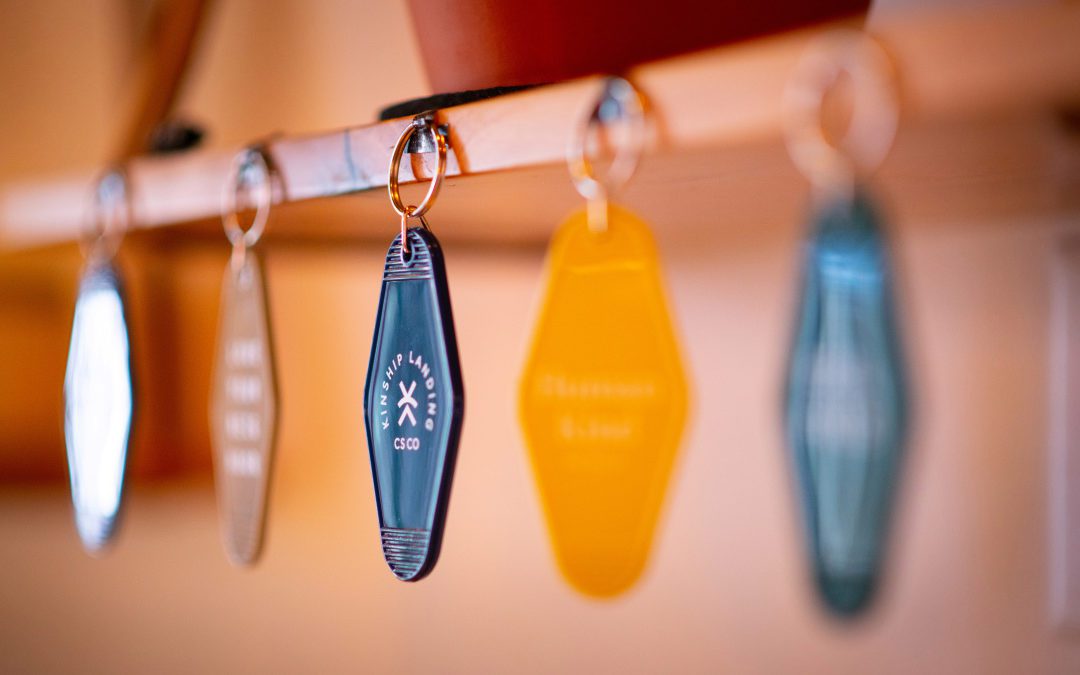 The couple spent nearly a year traveling the world, visiting 17 countries, and wanted to bring the hospitality they encountered to Colorado Springs. With financial expertise from a friend, Nate Grimm, the three got to work on Kinship Landing, a 82-unit, stylish hotel nestled downtown.

What they didn’t plan for was a pandemic.

“There was that moment where you’re like, ‘Is this thing gonna work still?’” Bobby said. “‘Do we still open? Or is there an escape route here?’”

The coronavirus pandemic brought the hotel’s construction to a halt and crippled travel throughout the state.

Hotel occupancy in Colorado sank to 38.8% in March 2020, compared with 69.3% in March 2019, according to the Rocky Mountain Lodging Report from the Colorado Hotel and Lodging Association. Consequently, hotels across the state raked in less revenue, with average daily room rates falling to $82.23 in April 2020 from $139 in April 2019.

Uncertainty put Bobby and Brooke in a bind. Could they still go forward?

The pair took the gamble, holding a grand opening for Kinship Landing on March 10 of this year. Bobby said occupancy didn’t meet the levels they expected, which initially forced them to cut room rates in half. Private suites went for $110 instead of $250, junior suites went for less than $100 instead of $180 and shared bunk rooms went for $30 instead of $50. But Bobby remains optimistic.

“I will say it’s been really encouraging to see occupancies starting to rise,” he said. “We’re on a nice upward trend.”

Kinship Landing shows that, even against the odds, hotels in Colorado Springs have weathered the pandemic better than others in the country. It mirrors the state’s hospitality industry, which is eager to bring vaccinated travelers back to their businesses this summer. But the pandemic’s effect on travel has ripples that many say won’t fade for years to come.

Colorado Springs is ahead of the pack

As with travel across the world, the coronavirus dealt a blow to hotels in Colorado Springs. However, the city’s proximity to greater outdoor attractions and leisure options that can be COVID-19 safe stemmed losses compared with those in other metropolitan areas.

Ski areas, trails and wilderness destinations In the Colorado high country hosted record numbers last year. The deluge in outdoor adventurers even forced some land managers and local communities to set limits on traffic that could spill over into this summer. The boom in recreation bodes well for Colorado Springs, which has long been a popular destination for hikers, cyclists and outdoor enthusiasts.

“People longing to get out of being boarded up in their homes during the pandemic perceive Colorado Springs to be a place that’s an outdoor city,” Bobby said.

“Some of the new attractions that we have opening this spring are just going to be a game changer,” he said.

Colorado Springs opened the historic Flying W Ranch and new U.S. Olympic and Paralympic Museum last summer. Just last month, the city opened Weidner Field, a new 8,000-seat soccer stadium that will host games and concerts this summer. By May 20, the Broadmoor Manitou and Pikes Peak Cog Railway — with a newly built Summit Visitor Center that builders say is the most sustainable high-altitude welcome center in the country — will be back in business.

Price bets that as the increase in vaccinations makes travel safer and prompts fewer COVID-19 restrictions, people will be itching to get out again.

“I don’t think that we’re giving the vaccination all the credit it’s due,” he said.

Data from industry tracker CoStar Group shows that the city has fared well on a national scale.

“(Colorado Springs) actually had one of the highest average-occupancy levels nationally compared to all markets,” said Emmy Hise, who directs CoStar Group’s hospitality analytics for the western United States.

Hise said Colorado Springs leads among the 166 markets that the organization tracks, with hotel occupancy at its peak reaching nearly 74%, an “outstanding number to see in a pandemic.”

That rebound was in large part due to higher demand for leisure travel, something that Hise said the Denver area hasn’t seen at the same level.

It hasn’t been business as usual in the capital either, where convention centers and conference rooms across downtown sit empty.

“The Denver market historically was the performance leader, but it was the hardest hit among the markets in Colorado,” Hise said.

After a record year in 2019, with nearly 74.3% occupancy, downtown Denver hotels suffered in 2020, with an occupancy rate of around 41.7%, according to the Colorado Hotel and Lodging Association.

Justin Bresler, vice president of marketing at Visit Denver, said travel across all types of visitors plummeted, especially among the crucial business transient as well as meetings and group travelers that aren’t making the trips they used to.

While the future of business-related travel is less certain, Bresler said summer events should coax leisure travelers out in larger numbers. Denver will host soccer’s 2021 CONCACAF Nations League Finals June 3-6 and the MLB All-Star game July 13. The city also has plans for limited events, including Denver PrideFest, Juneteenth and the Cherokee Arts Festival.

An increase in travel-planning behavior has accompanied event announcements, fueling a rise in demand across generations. Older people with time, money and shots in their arms, as well as millennials with a higher risk tolerance, are starting to hit the road again.

Still, Bresler and Price say travel won’t return to pre-pandemic levels this year, neither in Denver nor Colorado Springs.

“We are not expecting the international travelers to really come back in full force probably until 2024,” Price said.

The Mikulases feel hopeful that improving trends will mean success for their hotel’s future.

“I’ve got a lot of hope,” Bobby said, “that this summer is going to be, well, much better than last year.”