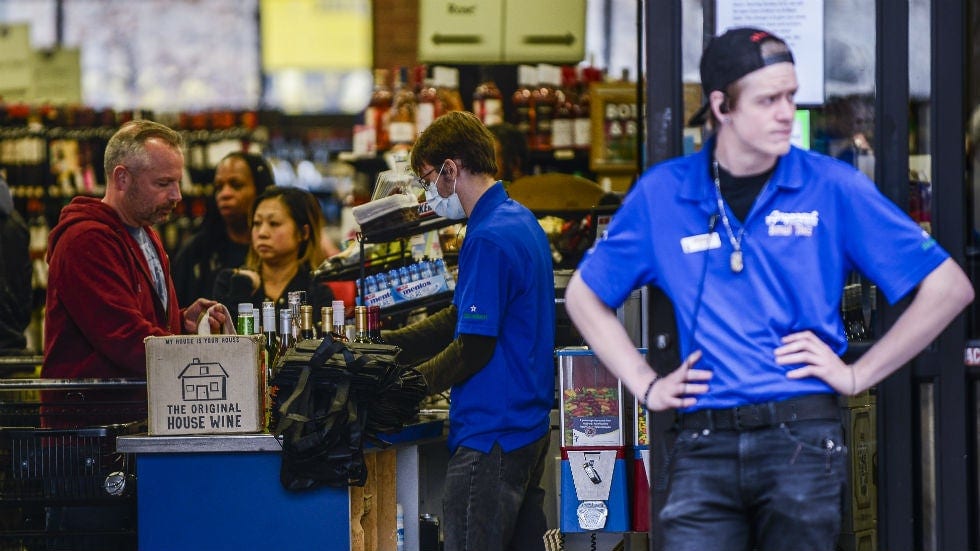 States are temporarily relaxing laws on alcohol purchases, providing a major win to the beer, wine, and spirits lobby during the coronavirus pandemic.

The new rules are intended primarily to provide relief for restaurants and small businesses and to keep alcoholic products available to customers.

But the developments mark a sudden shift in state alcohol laws, which traditionally have been resistant to change. In recent weeks, the alcohol industry has seen a decades-long wish list on easing sales restrictions fulfilled.

Those changes are being implemented by a wide range of states across the country. Maryland and New Jersey also call liquor stores essential, while California, Nebraska, Vermont, Kentucky, Colorado and the District of Columbia allow restaurant takeout and delivery orders for alcohol. Maryland and Texas are allowing alcohol deliveries to customers, just to name a few.

And others see it as encouraging for more uniform laws, which have varied sharply from state to state.

Dieterle said the temporary standards would remind the public of how antiquated liquor laws can be and the need for more uniformity.

“The more interconnected we get and our marketplaces get, the more people will want their state to be part of that alcohol market. You order anything on Amazon and its almost certainly coming from another state,” he said.

The alcohol industry is a huge player in Washington and its representatives say they have been working closely with governors and local leaders on how to keep the industry working despite closures due to the coronavirus.

“The industry has been very, very appreciative and played a role in being a guide with state governments as they consider their policy positions in COVID- 19,” Chris Swonger, CEO of Distilled Spirits Council of the United States (DISCUS), told The Hill.

“We fully appreciate that beverage alcohol needs to be appropriately regulated. Even during a national emergency, all of those important standards have to be maintained.”

The beer industry has seen loses as breweries close and beer supplies in closed venues such as restaurants, bars, and stadiums go bad.

“In our industry, we have seen regulators at both the federal and state level be very open to helping brewers stay in businesses. I think beer is uniquely posed to address the consumer need at this point in time of uncertainty about a public health crisis, uncertainty about an economic crisis,” McGreevy said. “Beer in particular brings a little joy and a little normalcy to an otherwise fraught situation for people.”

McGreevy said governors and state regulators are reaching out to see what they do to keep breweries operating.

“We have definitely seen governors and state legislators and others in the regulatory bodies reaching out and asking what can be done,” he said.

The wine industry already enjoyed easier rules —direct shipment is allowed in 46 states and D.C. But, Michael Kaiser, Wine America vice president of government affairs, noted that many wineries are dependent on sales from tasting rooms and retail.

He noted that some states are now allowing curbside pickup as well as local deliveries.

“Not everywhere, but what we’re also starting to see is rather than using a common carrier like UPS or FedEx, people are doing local deliveries on their own. In a lot of cases, that was not legal before,” Kaiser said.

Drizly, one such app, reported sales were up 300 percent compared to earlier this year and new users in March accounted for 41 percent of sales, CNBC reported. Minibar Delivery, another platform, also reported a 131 percent increase in sales.

David Cohen, professor at the UCLA Luskin School of Public Affairs, said it was common to rethink regulations during emergencies, but also noted the hand of the industry’s lobbying efforts.

“Regulations result from balancing many interests, but the weight of manufacturers, wholesalers and distributors of alcoholic beverages in influencing policy through lobbying is notable,” he said.

“We live in this world where—I kind of call it the ‘two day get everything at your door kind of world’ or even two hours. Alcohol, depending on where you are, is a great exception to that,” Dieterle said. “I think that people were already kind of were wondering, ‘that’s really weird why is alcohol different.’

Not all states have eased restrictions. Pennsylvania Gov. Tom Wolf (D) has closed all liquor stores and other alcohol distributors.

“We’ve seen a lot of instances where consumers are crossing state lines out of Pennsylvania to New Jersey and other states,” Swonger said. “We would strongly encourage him to reconsider.”

“Really, to me, it seems totally not based on reality. We’ve proven throughout human history that people will find a way to get alcohol,” Dieterle said.

But the changes also have critics, who argue that alcohol laws exist for a reason and relaxing them could be dangerous.

“Alcohol used excessively can lead to serious problems in people and in communities in the short and the longer-term. If changes in access to alcohol occur, consequences must be monitored so we can understand more clearly the impact — desirable, undesirable, and unanticipated — of our regulations,” Cohen said.

David Jernigan, professor at Boston University School of Public Health, noted that after Sept. 11, 2001 and Hurricane Katrina, alcohol consumption and dependence by those affected increased.

“The biggest problem is everything’s happening with no eye on the public health impact of alcohol use,” Jernigan said, also citing a reported spike in domestic violence.

Jernigan noted that while grocery stores are limiting how much toilet paper a customer can buy to prevent hoarding, there is no limit on alcohol purchases.

“This is a perfect storm of putting people at risk. Two, three years from now, you’ll see an uptick. People are putting in place now patterns of drinking that will put them in trouble over time,” Jernigan said.

But the industry is already looking ahead. The big question is whether relaxed rules on alcohol sales can become permanent after the pandemic. Industry groups are laying the foundation.

“How do we go back from this? What if Maryland wineries, as an example, decide this is a very good part of our business model?” Kaiser said about pickup and delivery options.

“When you hear about it you think, ‘man that’s really convenient, I like that as a consumer,’ ” he said.