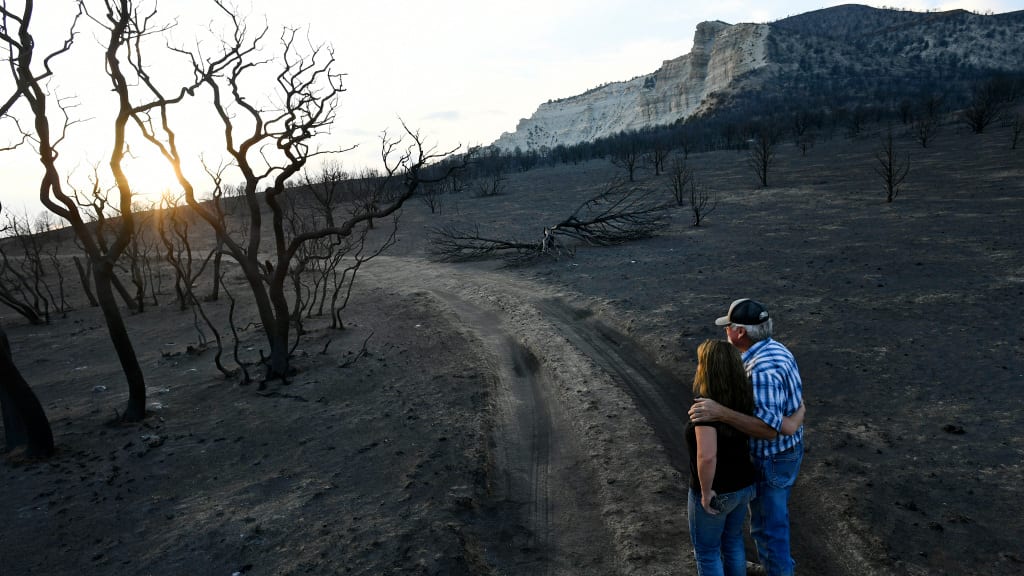 The Pine Gulch fire north of Grand Junction, now the largest wildfire in Colorado’s recorded history, hasn’t destroyed scores of homes and other structures like some of the mammoth fires of the past.

But the tens of thousands of acres it has scorched on the Western Slope include ranch land and wildlife habitat tied to many people’s livelihoods.

“I know people think it’s just barren land but it’s really not,” said Meg Latham, whose family ranches north of De Beque in Mesa County. “It’s the lifeblood for the ranchers, the wildlife, the (hunting) guides and outfitters, recreation. It’s big, beautiful country, very rugged. Cattle do well out here, when you have a decent year.”

This year has been anything but decent for ranchers and farmers statewide. Most of western Colorado is in extreme drought. The Lathams didn’t grow hay this year because it was so dry.

The Pine Gulch fire that quickly tore through crackling-dry brush, trees and grass has left them and other ranchers in western Colorado with much of their land blackened and useless for grazing

The wildfire surpassed the 2002 Hayman fire last week when it grew to just over 139,000 acres — or about 217 square miles. The Hayman fire, which burned 137,760 acres in Jefferson, Douglas, Park and Teller counties, destroyed 132 homes and 466 outbuildings, and was the second most costly fire in terms of insured losses.

The Pine Gulch fire, which is now 79% contained, is mostly on public lands and has burned few if any buildings.

But the blaze has charred vast tracts of federally managed land and private property that provide grazing for cattle ranches across the region. The land is important habitat for Colorado’s deer and elk herds, among the largest in North America.

Lightning sparked the fire, about 18 miles north of Grand Junction, on July 31. Although the flames spared the Lathams’ hay field, it charred most of their grazing land, including the public lands and private acreage they lease or own. It wiped out more than two miles of fence, which could cost at least $15,000 a mile to replace, said Dick Latham, Meg’s husband.

The family lost eight of their cows and seven of their calves. They are hauling hay from Nebraska to help feed their remaining cattle.

“Every mountain as far as the eye can see has burned. Mountain and valley both,” said Dick Latham, whose parents moved to the area in 1920. “Every one of these mountains has memories for us. Every hill has a story.”

“Both careers have been negatively impacted,” Meg Latham said. “There is no game because there is no grazing. And there is no hay production.”

The area where the Lathams live runs along the north side of the Colorado River in Mesa County. What looks like rugged and rocky country from Interstate 70 turns into rolling green hills once you get off the highway and head north. The countryside of pinyon pine, juniper and cedar trees, mixed with Gambel oak and sagebrush, is from 6,000 to 7,400 feet in elevation, changing from canyons to steep slopes to mesas with sweeping views.

“This is God’s country. It is so beautiful up here. We live in God’s country. To have it taken away and have no control over it is just heartbreaking,” said Todd Brackett, who has lived on his land about 20 miles north of De Beque since 1976.

Brackett figures that roughly 90% of the 2,000 acres of public land he leases is badly burned and about 400 acres of the 1,400 private acres the family owns or leases will be unusable. Stretches of once-green hillsides and fields are dusty charcoal with pockets of occasional green.

“Even when the fire stops there is so much to worry about,” Brackett said. “The animals, the fish in the high mountain lakes and streams, the trees, the land. Recovery will take three to five years, if we recover at all. It is a nightmare.”

The rains, seemingly welcome after drought and wildfires, are a potential source of trouble. The Lathams and Bracketts worry about the runoff and erosion without trees, grass or bushes to slow the water.

“We had a pretty hard little rain here, about 40, 50 minutes, the day before yesterday, and it started washing a lot of that dirt off the sides,” Brackett said.

Area ranchers are waiting to hear from the Bureau of Land Management, which oversees the federal land, and state officials about rehabilitating and reseeding the area when the fire is out. Federal and state agencies often team up after fires to restore forests or range land and prevent flooding caused by the loss of vegetation.

A federal BAER team — Burned Area Emergency Response — has been ordered, Colorado BLM spokesman Jayson Barangan said in an email. “They will conduct an analysis and develop a rehabilitation plan for the area, which the Grand Junction Field Office will execute.”

However, Barangan added, considering the magnitude of the fire, it will take several years to complete the work.

As for wildlife, over the long term, wildfires can be of benefit because when plants and trees burn they restore nutrients to the soil, according to Colorado Parks and Wildlife. Wildfires have long been common in Colorado and wildlife has evolved with them, the agency said.

But Meg Latham said deer, elk and other animals have been scarce since the Pine Gulch fire started. A camera set up at a water tank on their land showed several animals before the fire erupted. A day later, she said the camera caught an elk, a bear “and one poor magpie that looked like it was on the brink of demise.”

The only tracks they’ve seen for a while are coyotes, Latham said.

Jodie Brackett, Todd Brackett’s daughter-in-law, said neighbors “have graciously allowed us to put some of our cattle on their land.”

Over the long haul, the future of the operation isn’t clear.

A possibility is moving the cattle out of state where there’s grazing land. If they have to do that, Brackett said he doesn’t see staying in the business.

“I love calving season. I love feeding and being with the cattle. My life is all about being with my cows. All of the cattle we own we have hand-raised ourselves,” Brackett said.

He works part-time in the oil and gas industry, but wants to get to the point where he no longer depends on another source of income. His dream is to pass on the land and business to his grandchildren, but hopes of making that a reality are uncertain at this point.

“It is going to be hard over the next three to five years,” Dick Latham said.

However, he’s optimistic that his family’s business will survive. He said they’ve worked to stay out of debt.

“It takes more than a little fire to do us in.”