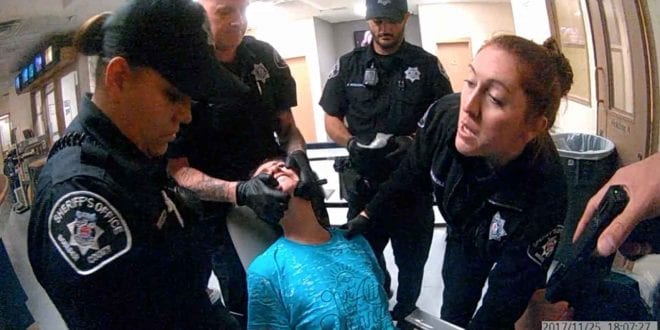 Boulder, CO — A Boulder County woman got an unfortunate lesson in police brutality and the video of it looks like something out of 1930s Germany. After attempting to exercise her rights not to incriminate herself, she found out the hard way police will not only taser you when you’re in handcuffs, but they’ll taser you when you’re completely restrained.

Last year, Lauren Gotthelf filed a federal civil rights lawsuit against several officers and the Boulder County Sheriff’s Office for an incident which took place on Nov. 25, 2017. This week, the lawsuit was settled and the taxpayers of Boulder County will be shelling out $400,000 to pay for the sadistic actions of their police department. None of the officers involved in the torture were fired or charged.

“The No. 1 goal in the litigation was to hold Boulder accountable and to make sure that no other person suffered the same indignity (Gotthelf) had,” Gotthelf’s lawyer, Mari Newman, of Killmer, Lane and Newman LLP, told the Daily Camera. “She and I are both very glad these goals were achieved.”

The lawsuit also forced the department to implement policy changes so that an incident like this one will not happen again. Though they sound like common sense, apparently this needs to be written down. Boulder County “has re-evaluated its policies” and made changes that:

“We looked at the circumstances from three years ago and felt that we could have done better,” Sheriff Joe Pelle said in a statement issued to the Daily Camera. “We made policy changes and updated our training over the course of the last year, improving our procedures to reflect our mission to provide the best public safety services to our community.”

At the time of the incident, Gotthelf got ticketed for smoking in public and not having her dog on a leash. She protested the charges by refusing to sign the police citation, an action which immediately resulted in her being arrested. It was such a minor infraction, it seems, but one which ultimately led to her torture she alleges. Her case shows that even the tiniest of infractions, if refused by citizens, can and will lead to those citizens getting kidnaped, caged, and in Gotthelf’s case, tortured.

Sgt. Chris Reiss claimed on video Gotthelf was suicidal and put her on suicide watch — something she immediately denied, calling the cops “nuts” for thinking it.  She then pointed out the obvious. She said if they really believed she was suicidal they should send her to the hospital. Also, there was no video of Gotthelf saying anything suicidal. But since cops think they have it all figured out, instead of getting her true medical help, they placed her into police suicide protocols.

They isolated the woman, placed her in a smock and then, according to the lawsuit, they put her into “a restraint chair, and inflicting multiple pressure point pain compliance techniques, and culminating in Sergeant Reiss tasing her despite the fact she was fully retrained and could not move…”

Far from giving Gotthelf help, the suicide protocols ended up to what most cop watchers would claim is state-sanctioned torture. Her lawyers agree. Attorney Mari Newman had the perfect adjective to describe her torture, calling it sadistic, especially for tasering her while completely immobile.

That’s not going to help somebody who’s suicidal. That’s just sadistic…If they truly believe that Lauren was suicidal, the best response would’ve been one of compassion one of humanity. But instead, what they did is immediately escalate the situation and treat her with unnecessary brutality…She was fully restrained, handcuffed behind her back and strapped into a restraint chair with somebody’s hands around her neck. I mean, she could not move if she wanted to and yet, they tased her.

As feisty as she sounds from the story, Gotthelf immediately called out her torturers for the improper treatment. She said, “You tased me for no reason,” to which officer Reiss responded, “No, I didn’t.”

Before they were changed as a result of the lawsuit, according to the Boulder County Sheriff’s Office policies, police used to have the right to taser you even though you are completely restrained. While the policy reportedly exists, the risks are present just as well. Over the years, the Free Thought Project has consistently reported on the potential for tasers to be deadly. Not only have suspects been tasered by police in showers, leading to their deaths, but tasers have also been deployed on inmates who ultimately succumbed to their lethal injuries. Many of these inmates were in chairs just like Gotthelf.

When it comes to opting out of police torture, there’s simply no check box available. If they want to torture you they can, they will, and they’ll get away with it. Sometimes they get away with murder, all because they wear a badge. Cop apologists will likely justify their way out of holding officers accountable by saying something like, “Well she should have just signed the citation.”

For those people, we have one reply: the Fifth Amendment. Why should a woman get arrested for choosing to remain silent and not sign a citation? Why should people get arrested and subsequently tortured for not signing an arbitrary piece of paper. It’s a police state people, and it’s getting worse.

Warning, the video below is extremely disturbing.