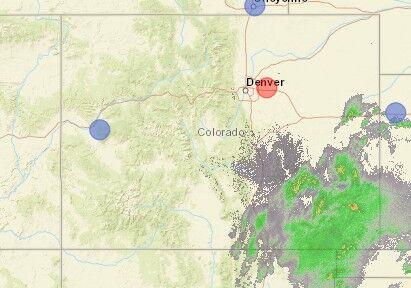 Stay with this story for updates on Colorado weather Saturday:

The Storm: Forecasters expect snow to begin falling across the Front Range after 10 a.m. Saturday and stick around through Sunday. The heaviest snow is expected to hit from Boulder to southern Wyoming, with predictions ranging from a foot to more than two feet in the hardest-hit areas.

8:15 a.m.: Moisture is moving into the Front Range with rain clouds over La Junta signaling the approach of the expected winter storm, radar images from the National Weather Service Office in Pueblo show.

The water-laden clouds could bring thunderstorms to the eastern plains, but as the moisture crashes into a cold front over higher terrains, snow is expected to pound Denver and Colorado Springs.

Meanwhile, conditions are worsening at the Continental Divide, with a crash restricting Interstate 70 to a single lane near Copper Mountain, where snow is falling, the Colorado Department of Transportation said on Twitter.

7:45 a.m.: The battle to keep Colorado thoroughfares clear has begun, with 950 plows ready to begin work, the Colorado Department of Transportation showed on its website.

In Colorado Springs, mist dampened the morning air as snow began falling on the Continental Divide.

7:30 a.m.: Snow snarled Interstate 70 near Copper Mountain Saturday as a winter storm gathered strength. The Colorado Department of Transportation has imposed traction laws in the area.

Traffic cameras in the area show I-70 is slick and snow-packed through the stretch in a preview of what’s expected to hit Denver and Colorado Springs later this morning.

State officials have asked drivers to keep off roads today, but if you’re forced to travel, check out the Transportation Department’s road condition website before you go: https://cotrip.org/

7:15 a.m.: If you want to be a hero in Denver this weekend, grab your shovel and join the city’s Snow Angels.

Established in 2017, the program allows volunteers to sign up to help their neighbors dig out after storms. You can lean more here: Denver Snow Angels

7 a.m.: The first sign of the impending storm came on Interstate 70, where the Colorado Department of Transportation imposed vehicle traction laws between Georgetown and Silverthorne. The move requires drivers to use snow tires or chains to navigate the mountainous 23-mile stretch.

The state has advised drivers to park it today with as much as three feet of snow expected to pile up on the Front Range over the weekend.

6:45 a.m.: If you’re planning to fly to or from Colorado this weekend, you may be out of luck thanks to the expected storm.

Another 20 flights arriving or departing from the Colorado Springs Airport Saturday had been cancelled, the airport’s website showed.

“Snow now looks to increase between 7-10 a.m., pushing back the prime time for accumulating snow to 10 a.m. Saturday to 4am Sunday then the ‘lull’ or ‘dry slot’ is expected,” the city’s Public Works Department said in an email early Saturday. “More persistent snow builds in late morning Sunday and waves of snow, varying from moderate to heavy are then expected through the afternoon and diminishing into the evening with generally dry conditions by around midnight or shortly after.”

6:15 a.m.: While much of the state braced for heavy snow Saturday, southeastern Colorado’s plains residents could be ducking from something different.

6 a.m.: Roads remained clear at daybreak Saturday across most of Colorado, with Interstates 70 and 25 mostly bare and wet.

But forecasters predict snow to fall across much of the state with Denver, Colorado Springs and the high country under winter storm warnings.

The National Weather Service said snow was certain in Colorado Springs Saturday, with up to four inches downtown during the day and more snow due after sunset.

In Denver, up to six inches of snow was expected during daylight hours Saturday and as much as another nine inches were due at night.

The Weather Service expected Boulder to be hammered with 18 inches or more Saturday.