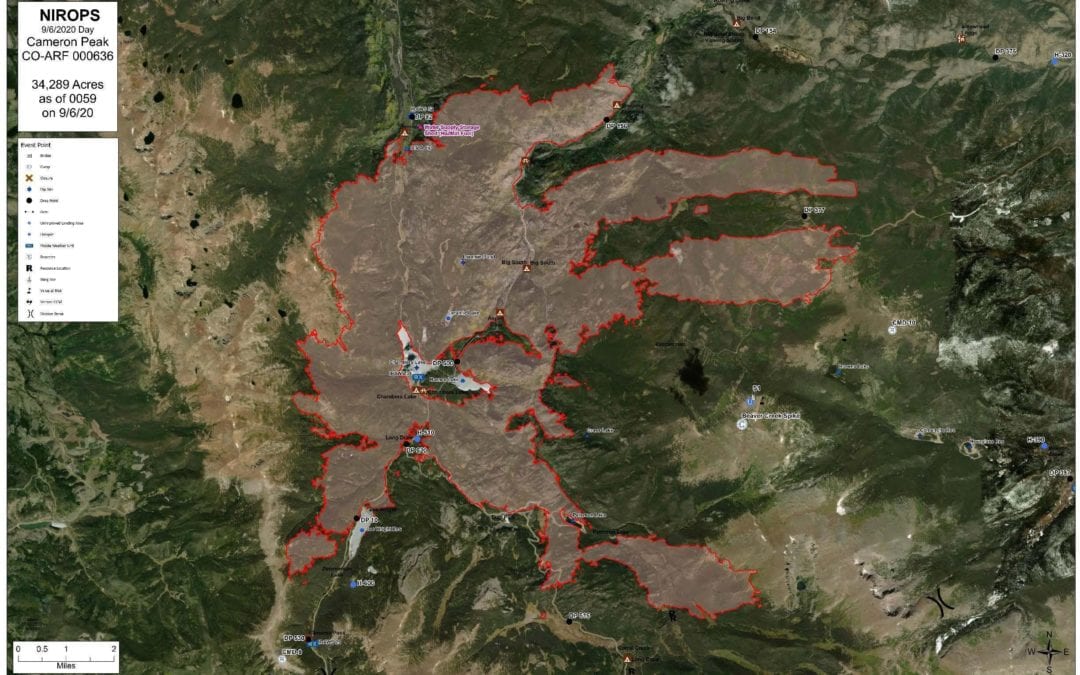 Editor’s note: We’re making this story free to read due to public safety concerns. But we rely on the support of subscribers to be able to do this work. Please help us by subscribing to the Coloradoan.

The Cameron Peak Fire exploded to more than 34,000 acres Saturday, raining down ash as far east as Greeley.

Hot, dry conditions and high winds continued to fuel the fire’s growth into Sunday afternoon, which led emergency responders to renew previously lifted evacuation orders and close additional areas near the fire burning in the mountains west of Fort Collins.

A virtual community meeting is scheduled at 2 p.m., to take place at the Facebook page for fire information, facebook.com/CameronPeakFire/.

This story will be updated throughout the day Sunday as additional information is made available. Here’s what we know Sunday morning:

The fire remains 5% contained, with that containment achieved by natural features on the fire’s western edge. The reduction in containment reflects the fire’s growth.

Firefighters expected smoke that built up from the big column that formed Saturday night to “vent out” as Sunday temperatures warm. According to a Sunday morning update, firefighters expect an active fire and have been preparing firelines and structure protection. Winds gusting up to 40 mph “will push the fire and test our lines” on Sunday, according to a Facebook update.

Areas of growth are expected in the area of Crown Point Road and Browns Lake.

There are 824 personnel assigned to the fire, supported by numerous aircraft. The cause of the fire that ignited Aug. 13 remains under investigation.

A red flag warning remains in effect until 8 p.m. Sunday across Northern Colorado, including the burn area. Daytime highs in the upper 80s are expected in the fire area, with northwest winds of 14-20 mph gusting as high as 31 mph.

Winds are expected to lighten overnight, and Labor Day calls for highs in the upper 70s and lower 80s in the burn area, with continued breezy wind.

All eyes are on Monday night, when rain, snow and sub-freezing temperatures are expected in the burn area and across Colorado. Rain is expected to turn to snow at 2 a.m., with new snow accumulation of an inch possible.

Tuesday’s forecast calls for potentially heavy snow — up to 6 to 12 inches — and a high near 30 in the area of fire activity. The chance of precipitation is 90%, according to the National Weather Service.

“I’m definitely praying that this fire will calm down a bit until the cold and wet conditions show up Monday evening,” Larimer County Sheriff Justin Smith said in a Saturday Facebook post.

1:30 p.m. Sunday: Rocky Mountain National Park will close Trail Ridge Road at 3 p.m. Sunday due to concerns of poor visibility as smoke from the Cameron Peak Fire inundates the park.

The road that spans the park between Grand Lake and Estes Park will be closed from the Colorado River Trailhead on the west to the Forest Canyon Overlook on the east, according to park officials.

Park officials previously closed Old Fall River road and other areas on the park’s northern reaches due to wildfire activity.

All residents and business occupants are ordered to leave the area immediately due to “immediate and imminent danger.” Residents should not delay to gather belongings or to protect their home or business.

11 p.m. Saturday: Old Fall River Road in Rocky Mountain National Park closed late Saturday night, according to a news release. It will remain closed until further notice. The trailhead at Chapin Pass is closed. Park officials initiated the closures “in an abundance of caution,” and changing fire conditions could lead to additional closures, according to an email from park spokesperson Kyle Patterson.

7:15 p.m. Saturday: The Larimer County Sheriff’s Office announced voluntary evacuations Saturday night for Crystal Lakes, Red Feather Lakes and the west side of the Manhattan Road from Larimer County Road 74E down to Colorado Highway 14. Voluntary evacuations mean residents should prepare to leave but don’t have to yet. However, those with animals to move and those responsible for people who need assistance and may need more time were encouraged to leave immediately.

6 p.m. Saturday: The Larimer County Sheriff’s Office announced mandatory evacuation for residents and businesses in the area along Pingree Park Road and also Highway 14 from the fish hatchery east to Kelly Flats due to immediate and imminent danger. Fire officials also ordered mandatory evacuations for the Pingree Park Road from Highway 14 south to the housing district east of the Colorado State University Mountain Campus for all residents and businesses.

LCSO told residents to evacuate the area immediately and as quickly as possible.

For evacuation updates, text the word LCEVAC to 888777 from your cellphone. LCSO will communicate information to that key word as needed.

A voluntary evacuation is also in place east of Pingree Park Road to Stove Prairie Road.

Coloradoan editor Eric Larsen can be reached at ericlarsen@coloradoan.com or 970-224-7745. Support journalism in Fort Collins and subscribe today at offers.coloradoan.com/specialoffer.