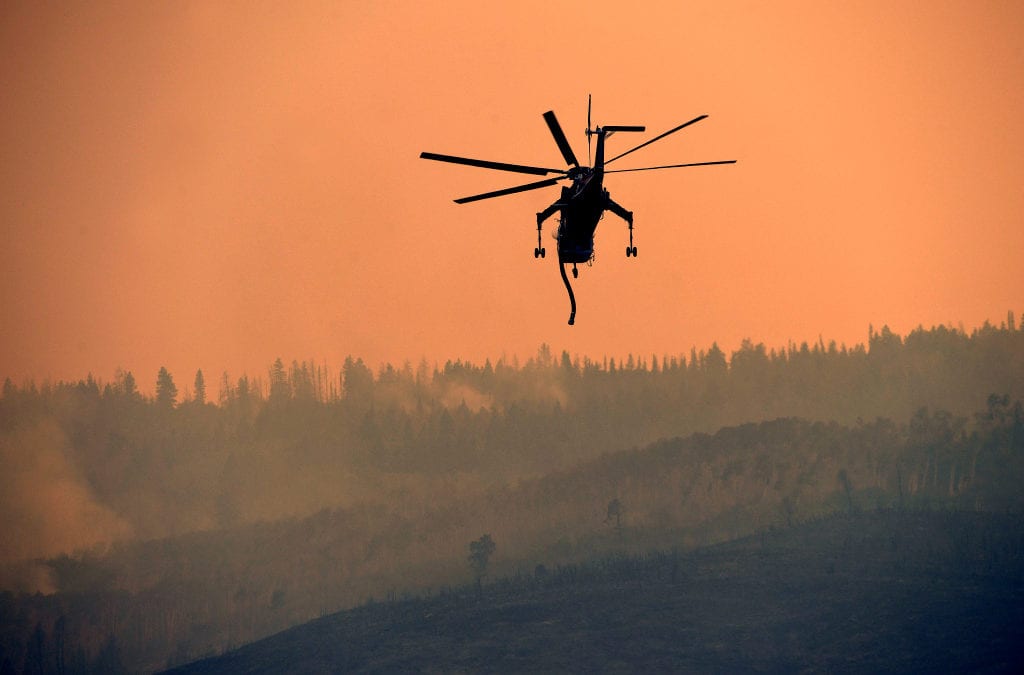 The fires have sent smoke all the way to the Front Range, as crews hope for rain and work to protect structures from Grand to Mesa counties.

Federal authorities recently declared 100% of the state as abnormally dry or under drought conditions for the first time in eight years. The designation marks a two-decade shift toward greater aridity in the state as the planet warms.

Gov. Jared Polis is scheduled to give an update on the wildfires, as well as the coronavirus in Colorado at 2:30 p.m.

The Pine Gulch fire grew slightly overnight, burning 87,209 acres, or about 136 square miles, as it inches closer to becoming the third-largest wildfire in Colorado’s recorded history.

For a look at just how dry it is out there, officials pointed to the moisture of the heavy logs in the Pine Gulch area. A piece of paper measures at about 6% moisture content — and the wood being consumed by the flames is at 8%. Even smaller fuels in the area have 2% moisture content, fire officials said.

The fire on Monday “became more active than desired,” officials said, with about 100 acres crossing a control line in the Mud Creek area.

Residents on Tuesday can expect more smoke columns, with significant smoke in some places.

Fire officials on Monday night said it could be several weeks before the area sees some relief.

Crews on Tuesday will focus on structure protection in No Name, along with a large presence in Blair Ranch, Spring Valley and High Aspen, officials said. Spruce Ridge will also be an area of focus.

The Cameron Peak fire grew by 1,200 acres overnight and is now burning 14,000 acres, or about 22 square miles, in Larimer County as of Tuesday morning.

Gusty winds up to 30 miles per hour and lower relative humidity in the next few days make it “very susceptible to get a head of steam,” operations section chief Paul Hohn said in a morning news briefing.

The drier weather will also bring heavier smoke to the region, Hohn said.

Crews will be doing structure protection Tuesday, including clearing brush near homes and buildings and installing sprinklers and pumps that can be activated if fires approach, Hohn said.

If the fire does approach Rocky Mountain National Park, the section chief said, the high alpine terrain makes for good conditions to fight the flames.

Rocky Mountain National Park officials implemented temporary closures Tuesday afternoon in the remote northwest corner of the park. More than a dozen trails and travel zones are affected but no roads are closed. The closure area also includes about 20 wilderness campsites.

The wildfire now sits at 6,627 acres, or about 10 square miles, but has not been contained, fire officials said on the incident webpage.

The fire was active in its interior Monday, but did not grow due to northeast winds, officials said. The smoke column seen over the fire was mostly due to unburned fuels being consumed on the fire’s interior.

Crews on Tuesday will focus on protecting infrastructure and high-resource values in the area, officials said.

There are no evacuation orders for the area, though a large area of U.S. Forest Service land — including road, trails and campgrounds — has been closed.