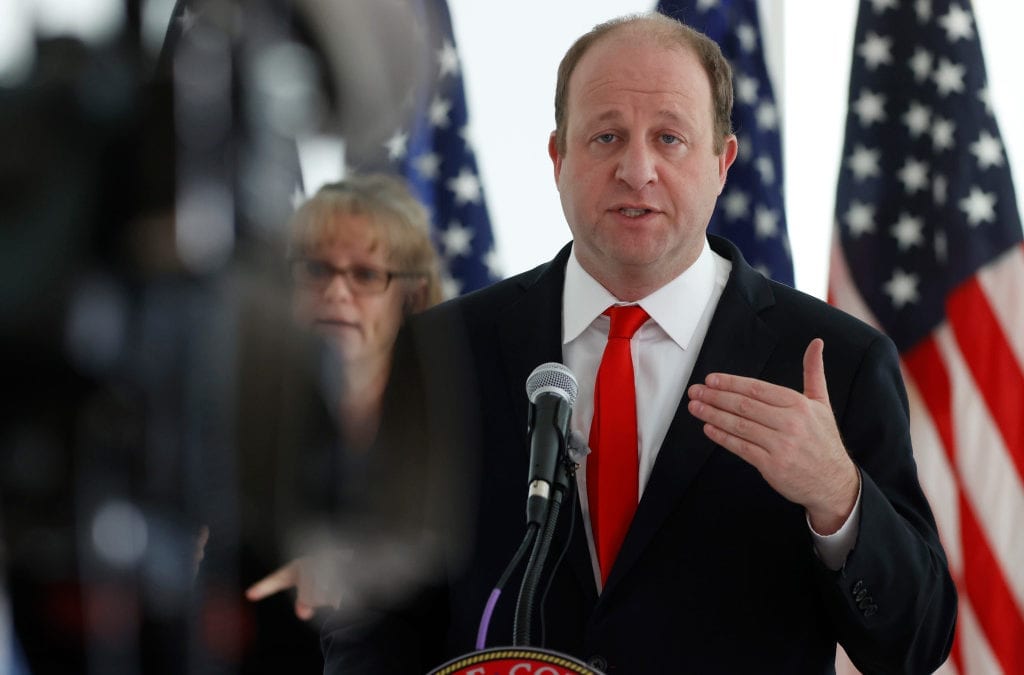 The first stage of Colorado’s response to the novel coronavirus pandemic is ending, but the second phase will be far from a return to normal life, Gov. Jared Polis said Monday as he laid out expectations for how the state will reopen after his stay-at-home order expires Sunday.

Coloradans will need to shift from staying at home to being “safer at home,” Polis said, outlining how the state’s order will morph into strong recommendations for residents with restrictions on the businesses that are able to slowly reopen in the coming weeks.

Polis said he expects retailers will have the option to reopen with curbside pickup beginning April 27, and then will be able to reopen to limited numbers of in-store customers on May 1, as long as they have social-distancing policies in place.

Companies likely can reopen offices with 50% of their workforces the following Monday, on May 4, the governor said, although he added that telecommuting should be maximized as much as possible, particularly with older employees.

Personal service providers and elective medical providers, including hair salons, dental offices and tattoo shops, will be able to reopen with some precautions on April 27, such as hair stylists wearing masks. One-on-one real estate showings — though not open houses — and child care can restart then, too, Polis said.

Restaurants and bars will stay closed initially but might be allowed to open in mid-May, Polis said. Schools will not reopen immediately. The state’s guidance will be finalized this week and written details will be released before the stay-at-home order is lifted.

Stricter local orders, however, will continue to supersede the statewide guidance, including Denver’s own stay-at-home order, which doesn’t expire until April 30. Mayor Michael Hancock also has said that his order closing Denver’s bars and restaurants to dine-in service will be extended past its current May 11 expiration — which could put the city’s eateries on a different reopening timetable than those in neighboring municipalities.

On the other hand, some counties may be able to relax restrictions earlier, the governor said, depending on their needs and local health department decisions. Eagle County, for example, has applied to ease restrictions before the statewide order expires Sunday. Polis said he looks forward to traveling to the high country later this week to grant that request.

But Polis also warned the state’s full reopening will be a long, painstaking process.

“It is a marathon, not a sprint,” he said. “We are going to have to live with coronavirus for a while.”

Colorado residents need to continue to reduce their social contacts for months to come even after the order lifts, Polis said. While the stay-at-home order successfully created about 75% to 80% social distancing in Colorado, the state will need to maintain about 65% social distancing in the coming months to avoid overwhelming the health care system with new COVID-19 cases.

Colorado has 10,106 lab-confirmed cases of the new virus and has seen at least 449 deaths, but public health officials estimate anywhere from 65,000 to 75,000 people may have been infected. If those estimates are close to correct, that would mean a little more than 1% of the state’s population has had the virus — not enough to create widespread “herd immunity.”

Jonathan Samet, dean of the Colorado School of Public Health, said in a conference call with reporters Monday that the state needs to be able to assure the public that hospitals will have enough beds to care for everyone in need, and to protect vulnerable populations like older people.

The models of possible infections and deaths that Colorado health officials are consulting suggest that to do that, the state will have to maintain some social distancing, while tracing infected people’s close contacts and getting widespread compliance with wearing masks in public for months to come.

“Social distancing alone will not work,” he said.

None of the models come close to a scenario where COVID-19 stops spreading in Colorado. Jill Hunsaker Ryan, executive director of the Colorado Department of Public Health and Environment, said during the call that the goal is to find a “sustainable” level of distancing that doesn’t result in intensive care units being overwhelmed with seriously ill people.

As restrictions begin to loosen in Colorado, public officials will monitor if the number of cases seems to be rising too fast, Hunsaker Ryan said. If that happens, the state could impose more restrictions again, she said.

Samet estimated that if social distancing decreases significantly, even to 45% from the 75% the state has achieved now, there likely would be a resurgence of COVID-19 cases in June.

None of the state’s models anticipate loosening the rules enough to accommodate the legion of outdoor enthusiasts Colorado typically sees every summer, though Samet was willing to entertain the idea of allowing visitors from areas with lower transmission levels.

Some areas of the state will be able to open to fuller degrees than others, Polis said, depending on the virus’s reach. Local public health agencies will be working to tailor their local strategies, he said.

“That flexibility is going to be very important,” he said.

Older people and those with underlying health conditions should be prepared to keep practicing social distancing in May at about the same level as they did in April, Polis said.

Testing and contact tracing will be a key part of the plan to reopen — and stopping additional outbreaks — and the state is undertaking “enormous efforts” to scale up the state’s ability to test and trace, Polis said.

The state is increasing coronavirus testing at long-term care facilities this week across the Front Range, with new sites opening up Sunday at facilities in El Paso, Adams and Broomfield counties. Three hundred tests will be provided this week at Pikes Peak Center, Elms Haven Center and Broomfield Skilled Nursing and Rehabilitation Center.

Yet the supply chain for testing components remains “unpredictable,” Hunsaker-Ryan said, so the state can’t quickly identify infected people and tell them and their contacts to isolate themselves. There’s also a shortage of epidemiologists to interview infected people and track those they could have exposed.

“We simply were not built for this,” she said. “The disease transmission is still too high for this to be our main strategy.”

Polis acknowledged that testing alone will not stop the pandemic, and that social distancing must continue in the state even without a direct order.

“Now it enters the time of individual responsibility and choices,” he said. “And I trust the people of Colorado to make good choices.”