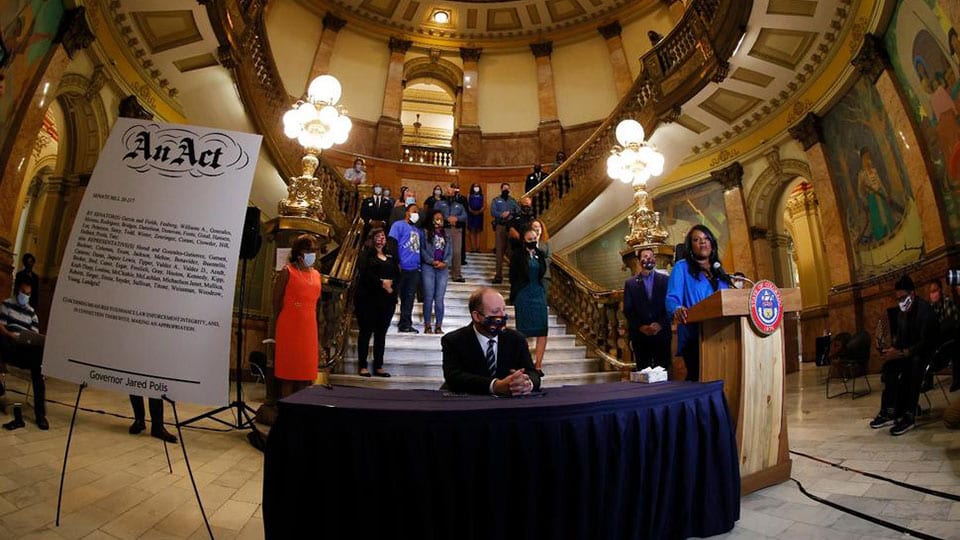 Colorado became the first state since the police murder of George Floyd and mass uprising to lift the qualified immunity of police officers. That measure is part of a broad police accountability and reform legislation restricting the use of force by officers and banning chokeholds, signed into law by Governor Jared Polis (D) on June 19.

The legislative victory resulted from daily protests at the state capitol, and in cities across Colorado. Demonstrators withstood tear gas, plastic bullets, and flash grenades from police until a District Court judge ordered a temporary halt.

“This is, in my estimation, the largest single advancement of individual civil rights and liberties for Coloradans in a generation,” said Denver civil rights attorney Qusair Mohamedbhai.

The bill also repeals the “fleeing felon” statute, which allows police to shoot someone fleeing if the police think they have committed a felon. The murder of De’Von Bailey by Colorado Springs police, stoked public outrage and galvanized support for the measure. Bailey’s family was instrumental in initiating the legislation.

“I think it’s important we abolish this today because the fleeing felon law has vestiges in slavery and Jim Crow,” said Democratic state Rep. Leslie Herod. She sees the bill as a start toward “defunding” the police.

“This is not the end,” said Serena Gonzales-Gutierrez, one of the bill’s sponsors. “This is one small step and there is a tremendous amount of work ahead of us.” The families of victims of police murders were present at the signing.

It was a police chokehold that killed Elijah McClain, an artist and massage therapist who had taught himself to play guitar and violin. He took joy in playing for stray cats and dogs because the music seemed to calm them.

On August 24, 2019, at about 10:30 p.m., Aurora, Colorado police officers, responding to a 911 call, confronted the 23-year-old African American who was walking home alone. Officers forcibly held McClain, who was unarmed and had committed no crime, onto the ground, twice using a chokehold.

The police called paramedics. They injected McClain, by then in a coma, with ketamine, an anesthetic also used to tranquilize horses. According to police, McClain suffered cardiac arrest on the way to the hospital and died three days later after being taken off life support.

“There is no justification for what those bullies with badges did,” said Sheneen McClain, Elijah’s mother. “Aurora police department is full of bullies with badges.” She contends her son was beaten to death by officers before arriving at the hospital.

Authorities cleared the officers of any wrongdoing. However, they later fired one officer involved in circulating a photo mocking McClain’s death.

That may have been the end of the story, buried like countless other African Americans and police violence victims. But McClain’s family fought for justice for Elijah, which became a rallying cry of the uprising for Black lives. The movement is demanding charges of murder for the officers.

A petition to reopen the case has garnered nearly five million signatures. On June 24, Governor Jared Polis appointed Attorney General Phil Weiser to re-examine the case. “If the facts support prosecution, criminally prosecute any individuals whose actions caused the death of Elijah McClain,” tweeted Polis. “Elijah McClain should be alive today, and we owe it to his family to take this step and elevate the pursuit of justice in his name to a statewide concern,” he added.

On July 28, the Department of Public Health and Environment initiated an investigation into the use of ketamine on McClain, reversing an earlier decision not to investigate.

But the fight is far from over. On July 25, about 500 marchers blocked I-225 in Aurora for a second time. Out of nowhere, a jeep attempted to ram protesters. In the chaos, one protester jumped off a bridge and broke her leg, and two more were wounded when another protester fired at the jeep.

The authorities detained and released the driver and a passenger but charged the shooter with four counts of attempted homicide. Protesters are demanding police release more information on the driver and his intentions.

One of those wounded by gunfire, Jo, told People’s World the bullet missed the main artery in his leg by “a centimeter.”

“Having protesters with guns will result in more casualties. It’s evidence everyone is less safe. It takes away from focusing on the right wing as the instigators of violence,” he said. “What we stand for are shared by the majority. I hope it doesn’t deter people from coming out for future protests.”

Like every state, Colorado has a long history of white supremacy and systemic racism embedded in all aspects of life. The establishment of Colorado occurred at the intersection of the genocide of Indigenous people, slavery, and the theft of lands from Mexico.

During the 1920s, the KKK dominated Colorado politics, claiming Gov. Clarence Morley, Denver Mayor Ben Stapleton, a U.S. senator, and the city’s police chief as members while controlling the state legislature. A movement led by Denver School Board member and community activist Tay Anderson won a commitment by residents to change the Stapleton neighborhood name.

As the recent legislative victory indicates, Colorado is also changing, counted on now as a reliable Democratic-voting state in presidential elections.

Latinos comprise 22% of Colorado’s population. African Americans make up 5% of the state’s population but account for 18% of the prison population.

In 1907, Colorado became the first state to designate Columbus Day as a state holiday. On March 10, the state legislature repealed the observance.

In 2019, Colorado became the 17th state to allow parolees to vote.

On July 2, Gov. Polis set up a commission to review statues, monuments, and mountains honoring racists and recommend changes. Statues of Christopher Columbus and Kit Carson, who committed acts of genocide against Indigenous peoples, have already been pro-actively removed.

One might also include Mount Evans, named for John Evans, Colorado Territorial Governor. Evans oversaw the infamous Sand Creek Massacre of nearly 200 Cheyenne and Arapaho Indigenous peoples in 1864. The massacre was committed by Union soldiers, who were battling Confederate soldiers at the same time elsewhere. Evanston, Illinois, is named for Evans.