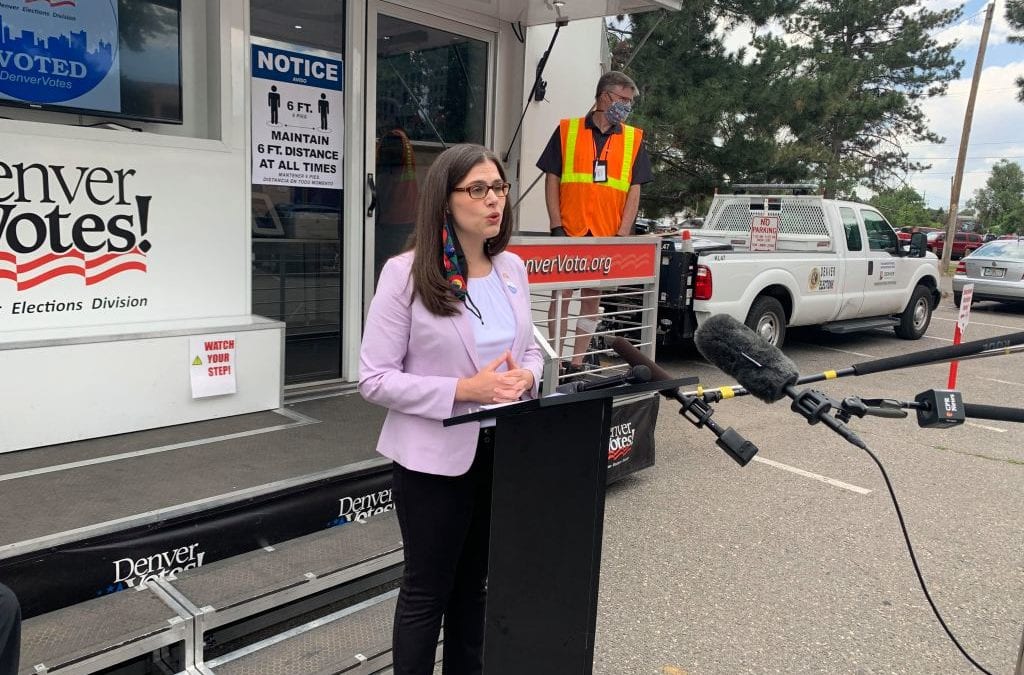 Jena Griswold, Colorado’s secretary of state, said that her office learned Thursday that the postal service would be sending out pre-election mailers to every household in America — but that the information on the cards does not align with state election rules.

“This attempt at voter suppression violates the United States Constitution and federal statutes and must be stopped immediately,” Griswold and state Attorney General Phil Weiser alleged in the complaint filed in U.S. District Court in Denver.

Griswold also filed a motion for a temporary restraining order, seeking to block the postal service from sending the mailers.

David Rupert, a postal service spokesman, told The Denver Post that a handful of Colorado communities — totaling in the thousands of households — received the postcard Thursday and Friday, with the rest set to receive it next week.

It’s all part of a national campaign through Election Day to “educate the public on the Postal Service’s role in the mail-in ballot process,” he said in an email. “The non-partisan campaign neither encourages nor discourages mail-in voting; rather, it is designed to reach and inform all voters about the importance of planning ahead if they plan to vote by mail.”

“Some of it applies to everybody and some doesn’t,” Rupert told The Post. “It’s meant for people to prepare.”

But Griswold argues in the lawsuit that “these false statements will disenfranchise Colorado voters, including its uniform military and overseas voters; mislead them about Colorado’s election procedures; infringe Colorado’s Constitutional rights to conduct its elections; and interfere with the Secretary of State’s ability to oversee Colorado elections. These false statements will confuse Colorado voters, likely causing otherwise-eligible voters to wrongly believe that they may not participate in the upcoming election.”

The secretary of state ticked off a host of items on the mailer that are not true for Colorado.

In a Twitter thread Friday night, Griswold said secretaries of state asked Postmaster General Louis DeJoy to review a draft of election information to ensure accuracy before it was sent to voters. But DeJoy, she tweeted, refused.

“This may have started off as a well-intentioned effort by @USPS, but their refusal to listen to election experts combined with the recent postal slowdown in some parts of the country is beyond suspect,” Griswold tweeted.

Election officials in California and Washington expressed similar concern that the pre-election mailers are providing voters with the wrong information.

California Chief Deputy Secretary of State James Schwab tweeted Friday night that the postcard “could be confusing for California,” noting discrepancies in the postal service mailer with several of the state’s ballot-return policies. Sacramento County issued its own statement, assuring voters that they do not need to request a mail-in ballot in order to receive one.

Washington’s secretary of state Kim Wyman said in a statement Friday that her office was “not made aware this mailer would be sent” to state residents, saying voters there also are not required to request a ballot in order to vote.

As Colorado’s top election official, Griswold has been increasingly vocal in recent weeks over the Trump administration’s cuts to the postal service and attacks against mail-in voting — calling the efforts voter suppression.

President Donald Trump has railed against voting by mail, insisting without evidence or proof that it is linked to voter fraud. Experts, time and again, have shown voter fraud to be virtually nonexistent in U.S. elections — between 0.0003% and 0.0025%, according to the Brennan Center for Justice.

On Saturday, the president again tweeted incorrect information about voting in North Carolina, to which Griswold replied: “This is encouraging voter fraud, and I will refer you @realDonaldTrump for prosecution if warranted.”

Griswold on Monday threatened to refer the president for prosecution in cases where double-voting is suspected in the state.

Colorado last month also joined a host of other states in a federal lawsuit alleging cuts to the Postal Service “threaten to undermine our state’s independent authority to conduct elections,” Weiser said.

DeJoy, speaking before Congressional committees last month, vowed that the postal service could handle the influx of mail-in ballots to be counted for November’s election. Democrats, however, have sounded the alarm over cuts to dozens of mail sorting machines that DeJoy declined to reinstate.

I just found out the @USPS is sending this postcard to every household and PO Box in the nation. For states like Colorado where we send ballots to all voters, the information is not just confusing, it’s WRONG. (Thread) pic.twitter.com/RoTTeJRJVl