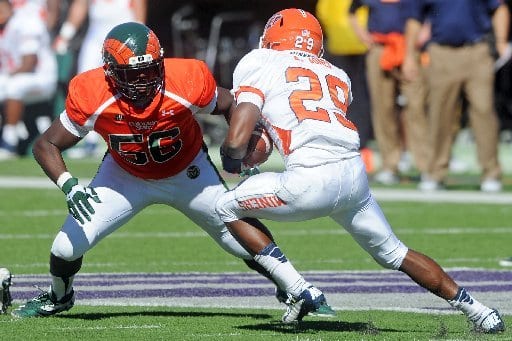 Football fanatics commonly glance at total number of tackles to judge a linebacker’s performance. Fittingly, the best of the best at LB often lead their squads in takedowns –– like many of Colorado State’s all-time great linebackers.

However, beyond takedowns, there are loads of both tangible and intangible assets which truly separate excellent middle-of-the-field defenders from the rest.

It’s impossible to mention the former Rams listed below without referencing their phenomenal ability to heave themselves at ball-carriers. Nevertheless, keep in mind that all of the players included in the fourth edition of our CSU all-time depth chart series did so much more for the green and gold than simply force opponents to the ground.

This is why each of the soon-to-be-acknowledged linebackers impacts won’t be forgotten by Rams’ fans anytime soon. The position itself naturally calls for multifaceted efficacy, and these guys were the full package in Fort Collins.

This segment does not incorporate individuals who are currently competing or completed their careers before 1974.

McLain still stands as one of the best linebackers in CSU history more than four decades since solidifying his hard-hitting prowess at Hughes Stadium. Despite spending only two seasons as a starter for the Rams, the eventual first-round NFL draft selection certainly made the most of his brief career under coach Sark Arslanian.

The Oklahoma native seized his first of two consecutive first-team All-Western Athletic Conference honors in 1974 upon accruing 198 total tackles –– which sits atop the Rams’ leaderboard for takedowns in a single campaign. Highlighted by a 23-tackle outing against Brigham Young University, McLain concluded his collegiate tenure as an All-American in 1975.

Harper’s emergence as an upperclassman assisted the Rams in improving from an 0-12 squad in 1981 to pulling off nine victories in 1982 and 1983 combined. Though missing a bowl game in each of the aforementioned seasons didn’t provide very much for CSU to write home about, Harper’s contributions in the early 80s were an entirely different story. The linebacker immediately became a prized possession of first-year head coach Leon Fuller in 1982 as the junior erupted to tally 160 tackles, representing the fifth-best single-season mark ever for a Ram.

Harper’s phenomenal junior year also included setting CSU’s record for takedowns in a contest, where he amassed 32 tackles versus Wyoming. He followed up the assertive campaign by again leading the 1983 Rams in tackles (131) while obtaining first-team All-WAC merit for the second time.

James, undoubtedly the top defender from Jim McElwain’s brief stint, marks the last CSU linebacker picked in an NFL draft. The quarterback-hungry athlete burst onto the scene as a first-year star via posting 7.5 sacks as a 2012 freshman All-American. James never slowed down from there en route to collecting 24 career sacks (fourth in CSU history) and 41.5 total tackles for loss.

NFL scouts are probably still scratching their heads regarding how they overlooked Barrett before the 2014 draft. After six solid seasons as an undrafted signee with the Denver Broncos, Barrett tapped into seemingly endless potential in Tampa Bay last year upon leading the league in sacks (19.5).

Considering his dominance once transferring to CSU from Nebraska-Omaha, the linebacker’s professional breakout shouldn’t surprise Rams fans in the slightest. Barrett graduated boasting a pair of first-team All-Mountain West Conference accolades as well as the league’s 2013 defensive player of the year award under his belt, Barrett’s 12 sacks as a senior sit in third on the Rams’ all-time leaderboard. He also impressively added 19 total tackles for loss that year. And while his final two seasons overshadow his first CSU campaign, he was equally as dominant during a 2011 stint in which he finished first on the squad in tackles (99).

Amid arguably the finest chapter of legendary head coach Sonny Lubick’s reign, the Rams enjoyed utterly lethal production inside the linebacker corps. Of the many memorable participants, Kvamme added a layer of efficacy to the group. He wrapped up his tenure as CSU’s all-time fourth-leading tackler (385) as the best segment of his career occurred in 1997 –– when he snatched first-team All-WAC distinction as the No. 17 Rams cruised to a Holiday Bowl victory.

Once Rick Crowell –– who we’ll surely mention soon –– graduated at the turn of the century, Pauly took the torch and ran. The linebacker was as smart on the field as he was aggressive, and he utilized his versatile skill set to accumulate the most tackles in the Mountain West in 2001 (115). He bested that number by hoarding 121 takedowns in 2002 upon finishing first on the Rams in tackles in back-to-back seasons.

Crowell’s upperclassman years alone make him one of the top linebackers ever to wear green and gold. The vigorous linebacker seamlessly notched first-team All-Mountain West glory in both 1999 and 2000. Speaking of the 2000 season, Crowell pummeled the opposition like never before as a senior while winning the conference’s defensive MVP trophy and stockpiling 125 tackles

Overall, Crowell ranks fifth at CSU in career takedowns (370). His vision and exceptional knack for reading offenses is undoubtedly worth noting as well. The linebacker always seemed to successfully anticipate where a gunslinger’s eyes were, reflected by his five interceptions between 1998-2000.

Close to last but nowhere near least, Willie Taylor checks into the Rams’ prestigious depth chart. As previously mentioned, the mid-90s represent a prime era for CSU at linebacker. Taylor, whose 433 career tackles are the most in Rams’ history, served as a key component amid the prolific juncture of CSU’s chronicle.

It wasn’t merely one season or two that propelled Taylor to status as one of the Rams’ all-time greats. A consistently dependable force on defense, Taylor helped anchor Lubick’s squads on a yearly basis. The linebacker led CSU with 146 tackles as an underclassman in 1996, which ranks as the eighth-highest single-season mark for the program. A two-time All-WAC recipient, Taylor also finished first on the 1998 Rams in tackles (87) before bidding farewell to Fort Collins.

As a guiding figure on the field, Watson’s poise and gritty determination began gluing the middle of the defense together in 2016 and continued doing so until the linebacker departed. From the moment he first stepped on the gridiron at Hughes Stadium, Watson displayed remarkably merciless hitting capabilities. Simply put, the Missouri native poured his all into each and every one of his 367 career tackles (sixth in CSU history). And over time, he utilized his expertise to enhance the performances of fellow linebackers –– like Tre Thomas.

Watson was a gift that kept on giving as the eventual NFL signee led the 2017 Rams in takedowns (109) and finished second on the squad with seven pass breakups. CSU opting to shift defensive coordinators in 2018 didn’t seem to bother Watson one bit during his senior year as he wrapped up his collegiate services by again leading the Rams in tackles (131). Permanently ingraining the ruthless linebacker in the memory of CSU fans, Watson’s 51 games played are tied for the fourth-most at CSU.