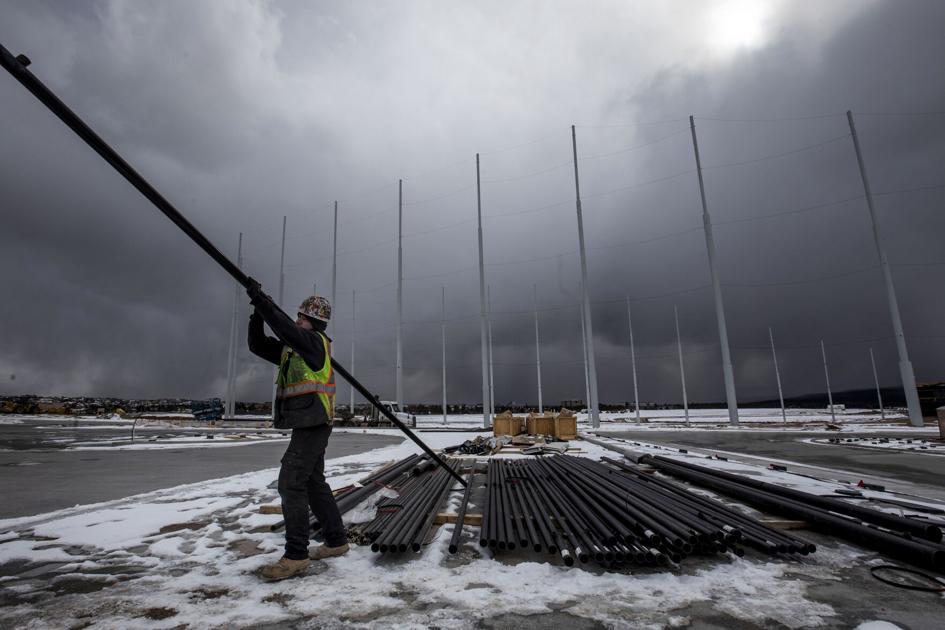 Today, the 200-acre Polaris Pointe retail center in northern Colorado Springs is being called one of the city’s most vibrant shopping centers.

But when it was launched more than a decade ago, Polaris Pointe had more critics and skeptics than stores and restaurants.

For starters, its timing was suspect, some said. Originally known as Copper Ridge at Northgate, the project was proposed in 2010 as one of the Springs’ largest retail centers, even though commercial activity at that time had slowed amid the Great Recession’s aftermath.

Polaris Pointe also was controversial because of a Colorado Springs City Council decision to designate the grassy, undeveloped project site, southeast of Interstate 25 and North Gate Boulevard, as an urban renewal district.

Council members argued the designation would allow shopping center tax revenues to be earmarked for construction of the much-needed, north-side Powers Boulevard extension, a state highway project for which the Colorado Department of Transportation said it had no money.

But opponents accused the city of making an end-run around the state’s urban renewal law, which they said was designed to breathe new life into decaying urban areas and not subsidize suburban greenfield sites such as Polaris Pointe.

“This is another boondoggle by elected officials who maybe didn’t really understand the full ramification of the vote,” then-City Councilman Tim Leigh said in 2012. A commercial real estate broker, Leigh had joined the council a year after his colleagues declared Polaris Pointe an urban renewal site.

“I would doubt that it’s going to happen because I don’t know anybody who has the money to put into the deal,” Leigh added at the time.

Now, however, the critics are mostly quiet and the controversy has largely ebbed.

Polaris Pointe — with more than 60 stores, restaurants and entertainment venues on a roughly 100-acre northern portion of the development, including a Bass Pro Shops and a Topgolf entertainment center announced last week — has become one of several successful shopping centers that dominate the city’s north-side retail landscape.

Property and sales tax revenues generated by Polaris Pointe over the last several years are funding a $67 million first phase of the Powers extension; the four-lane road will run from Voyager Parkway to Interstate 25 and includes six bridges and a new interchange. It’s targeted for a June opening; a timetable for a second phase of the extension, from Voyager to Colorado 83, is uncertain.

Polaris Pointe developer Gary Erickson, who said he never lost confidence in the project, doesn’t want to rehash the past. Instead, he said he’s focused on bringing more users to Polaris Pointe, completing the initial leg of the Powers extension and getting started on a second phase of development on the approximately 100-acre south side of the new extension.

“It was a big gamble for everybody,” Erickson said. “I’m not the biggest developer in town. Before they (city officials) did this, they vetted me. They hired a company to go through my history and they had to certify that I was financially capable of pulling off what I was proposing and before the City Council would approve it.”

In 2005, Erickson, a Colorado Springs-area residential and commercial developer, bought about 320 acres of the north-side Northgate development. At the time, he said he was betting on a future Powers Boulevard extension to unlock the property’s potential.

Powers, a north-south highway on the Springs’ east side, was envisioned for decades by local and state transportation officials as an alternative to I-25 that would run the length of the city and connect to the interstate on its north and south ends.

But without enough funding, state transportation officials had no immediate plans to extend Powers to I-25 from where it now ends at Colorado 83 .

Five years after he bought the Northgate property, Erickson, in conjunction with city government staffers, proposed Polaris Pointe and sought to have it declared an urban renewal site.

In general, an urban renewal designation allows incremental increases in property and sales tax revenues generated by new development to be set aside to fund utility, road, drainage and other onsite public improvements. Those government-funded upgrades are meant to encourage developers to invest in blighted areas.

In the case of Polaris Pointe, Erickson and city staffers proposed funneling tax revenues from the new shopping center toward the construction of the Powers extension.

For the community, extending Powers would accommodate increasing amounts of north-side traffic and provide a new link to I-25. For Erickson, Powers would run through the heart of Polaris Pointe and provide easy access for shoppers, which would make the project more attractive to retailers who were considering whether to locate at the shopping center.

But the proposal to declare an undeveloped area as blighted was so controversial that the Colorado Springs Urban Renewal Authority rejected the idea and urged the City Council to do the same.

Still, the council voted unanimously in May 2010 to designate Polaris Pointe as an urban renewal site. Creating a funding tool to pay for the Powers extension outweighed concerns about the urban renewal designation and protests that Polaris Pointe would create government-assisted competition for other shopping centers, council members said at the time.

Little activity was visible at Polaris Pointe in the first two years after the City Council’s action; that’s when Leigh labeled it a “boondoggle.”

Less than a week after that comment in February 2012, Erickson and Bass Pro Shops announced that the outdoor retail chain would build a 117,000-square-foot store to anchor the shopping center. Bass Pro, which draws outdoor enthusiasts on a regional basis, opened in November 2013.

Since then, Polaris Pointe — whose urban renewal district boundaries extend east of Voyager — has added dozens of local, regional and national stores, restaurants and entertainment venues.

In 2020, they were joined by a franchised location of national health food chain Vitality Bowls; Momma Pearl’s Cajun Kitchen, which relocated from the city’s northwest side; and Buttermilk, A Breakfast Eatery, which is operated by the owner of Bourbon Brothers Smokehouse & Tavern.

“It’s one of the most vibrant retail areas in the city,” said Bob Cope, economic development officer for Colorado Springs city government and who worked with Erickson to obtain Polaris Pointe’s urban renewal status.

Residential projects also are now part of Polaris Pointe. The 301-unit Polaris Junction apartment complex, being developed by Mississippi-based Blackburn Communities, expects to open in 2021, while Erickson plans to start construction this year on a 51-unit, luxury loft project for residents 55 and older. A 245-unit apartment project also is in the early planning stages, he said.

Not everything has gone according to plan at Polaris Pointe.

A hotel and water park that Erickson announced in early 2012 was dropped five years later after a third-party developer walked away from the project. Like other retail centers, the COVID-19 pandemic has led to a handful of closings at Polaris Pointe, including regional bar and restaurant CB & Potts.

And while the City Council approved the urban renewal designation in 2010 as a funding mechanism for the Powers extension, El Paso County Commissioners rejected a request by Erickson to earmark a portion of county sales tax revenues for the project.

Two years ago, Erickson and city staffers sought more city sales tax dollars for the Powers extension; the council agreed in March 2019 to increase from 1% to 1.75% the portion of the Springs sales tax rate that generates revenue for the Powers work.

After the council OK’d the increase, construction began in November 2019 on the extension from Voyager to I-25. A metro district set up by Erickson issued bonds to fund the work; the bonds are being repaid by the increased property and sales tax revenue generated at Polaris Pointe.

While Polaris Pointe revenues are funding the extension, CDOT spent $1 million on early grading on the Powers route, between I-25 and Voyager, said Tim Mitros, a former city official and the metro district’s manager. CDOT also constructed a $9.5 million water quality project in conjunction with the new interchange.

Since he started Polaris Pointe, Erickson also has shifted gears on the project’s concept.

It’s still home to traditional retailers and restaurants. But because more consumers make their purchases online, Erickson said he’s sought to add people-generating venues to Polaris Pointe — such as Topgolf, AirCity 360, Overdrive Raceway and the Boot Barn Hall concert venue. An indoor skydiving facility, with a restaurant, is the latest entertainment facility proposed at Polaris Pointe.

“The more that you get consumers going to an area for an experience, whether that’s food or concerts or racing cars or whatever it may be, then they tend to walk around and shop,” Walker said. “They tend to hang around the area and spend more dollars.”

The completion of the Powers extension in June will position Polaris Pointe’s south side for development, though Erickson said he’s also revamped his vision for that portion of the property.

In 2010, he proposed a high-end, enclosed mall south of the future Powers extension. But with Nordstrom, Macy’s and other upscale brick-and-mortar retailers closing stores, that concept won’t work, he said.

Instead, he now expects to develop the south side of Polaris Pointe similar to the University Village Colorado retail center on North Nevada Avenue, also an urban renewal project.

A Lowe’s Home Improvement Warehouse, Costco wholesale club and a Kohl’s department store anchor University Village, which  has dozens of smaller retailers, restaurants and service-oriented businesses. Erickson expects to bring similar types of big boxes to the south side of Powers, along with stores, eateries and perhaps a fitness center, grocery and movie theater.

The addition of retailers on the south side of Powers would generate more property and sales taxes to pay off bonds for the first phase of the extension.

Those future revenues also could help fund the second phase of Powers, between Colorado 83 and Voyager. So far, Erickson said, Polaris Pointe revenues are the only funding source for that next portion of Powers, which has an estimated price tag of $71 million.

Even though Polaris Pointe has made significant strides, it still doesn’t sit well with some people.

John Olson, co-owner of Civic Design Partnership, a Colorado Springs urban design and landscape architecture firm, was a member of the Urban Renewal Authority that opposed the Polaris Pointe blight designation in 2010. After a few years off the board, he’s since rejoined the authority.

Olson said he’s always wanted Polaris Pointe to succeed, but still believes the urban renewal designation for a greenfield site was philosophically wrong. It opened the door for the City Council’s decision two years ago to declare a portion of pristine Air Force Academy property as blighted to accommodate a new visitor’s center, he said. He also opposed that decision.

“I personally don’t believe that’s the route we should be using urban renewal for,” Olson said. “It would be nice to have some other mechanism to do that and not call it urban renewal.”

Tax dollars spent to build the Powers extension also have benefited Polaris Pointe’s development at the possible expense of rival shopping centers, Olson said. Erickson has countered that the city has approved incentives for retailers such as Scheels All Sports, which opens in March at InterQuest Marketplace a few miles south of Polaris Pointe.

Former Councilman Scott Hente, who also sat on the Urban Renewal Authority a decade ago, supported the urban renewal designation for Polaris Pointe. Despite the controversy at the time, the City Council made use of the tools available under the state’s urban renewal law, he said.

The result is a thriving shopping center and the soon-to-open first leg of the Powers extension, Hente said.

“I look back on my time on council and I will tell you, with perfect 20-20 hindsight, there were some decisions that I would do a little bit differently,” Hente said. “Not this one. I thought at the time we were making the right decision. I still think it was.”