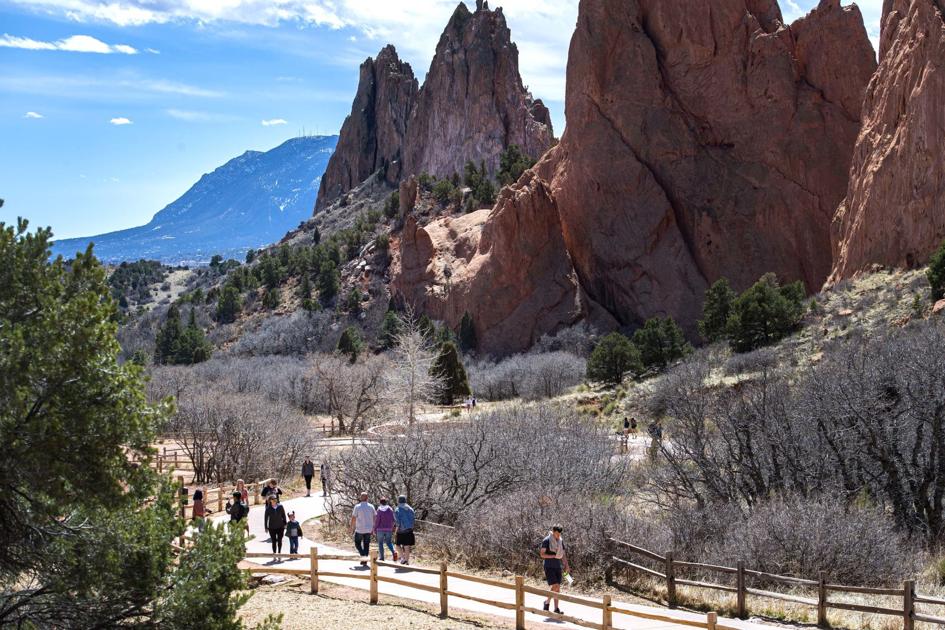 The coronavirus pandemic has emptied popular gathering places, but not Colorado’s natural sanctuaries. Far from it.

Along the Front Range where the masses have been working from home or left jobless, trailhead parking spots have been seen packed on weekdays when they’re normally open. That includes Colorado Springs, where officials have ramped up messaging on social distancing and safety.

“We are committed to keeping parks, trails and open spaces accessible, as long as it is responsible to do so,” city parks Director Karen Palus said in a press release outlining public health guidelines.

On Tuesday, Mayor John Suthers reiterated those recommendations in a press conference, saying all hikers, bikers, bird watchers and “sun worshippers” needed to maintain six feet of separation. No one should go out if feeling sick, he said. Team sports should not be played, he added, and children should not be sharing playground equipment.

Suthers said enforcement would increase with park rangers and police officers who would be otherwise assigned to schools.

“And by all means, spread out. Try new parks, trails and open spaces,” Suthers said. “We don’t want to close Garden of the Gods, but we will if we need to.”

Last week, a barrier was placed at the base of the Manitou Incline, the region’s busiest trail that Manitou’s City Council deemed a health hazard. Near Denver, the popular Waterton Canyon recreation area has been closed. And across America, gates have come down at national parks, including Rocky Mountain National Park.

“Close the parks until we can get enough test kits to find out who is in fact carrying the virus,” Bill Murray said in an interview Wednesday. “All I’m asking is to buy us some time to get our act together.”

While the mayor has so far decided against a stay-at-home measure of the sort ordered by Denver’s mayor, Murray has been critical of Suthers, saying: “We are basically watching a Category 5 storm approach us with nobody taking protective measures.”

And while parks have stayed open amid shelter-in-place orders elsewhere —  recreation sites remain open during Boulder’s lockdown — Murray suggested the Springs was in a unique position with its broad, bustling base of trail users.

“We may get to the point where we may allow only certain parks to be open,” City Council President Richard Skorman said in a phone call, while strolling a meadow near his home. “But for now, it’s probably something that’s keeping our population from mental health issues.”

In a letter from the Trails and Open Space Coalition (TOSC) and signed by several other local recreation and conservation groups, city officials have been urged to leave parks and trails open.

“Closing them would be another blow to our communities’ collective sprit in coping with this crisis,” the letter read.

TOSC Executive Director Susan Davies encouraged people to visit the nonprofit’s website, where lesser-known getaways are spotlighted as part of the group’s “Get Out Spread Out” campaign.

“We’re trying to give people choices, other options,” Davies said. “Because we know people need to get out.”

The decision makers know, too, said Kurt Schroeder, the city parks department’s maintenance and operations manager. Wednesday afternoon, he said the department has not discussed the possibility of limiting or cutting off access.