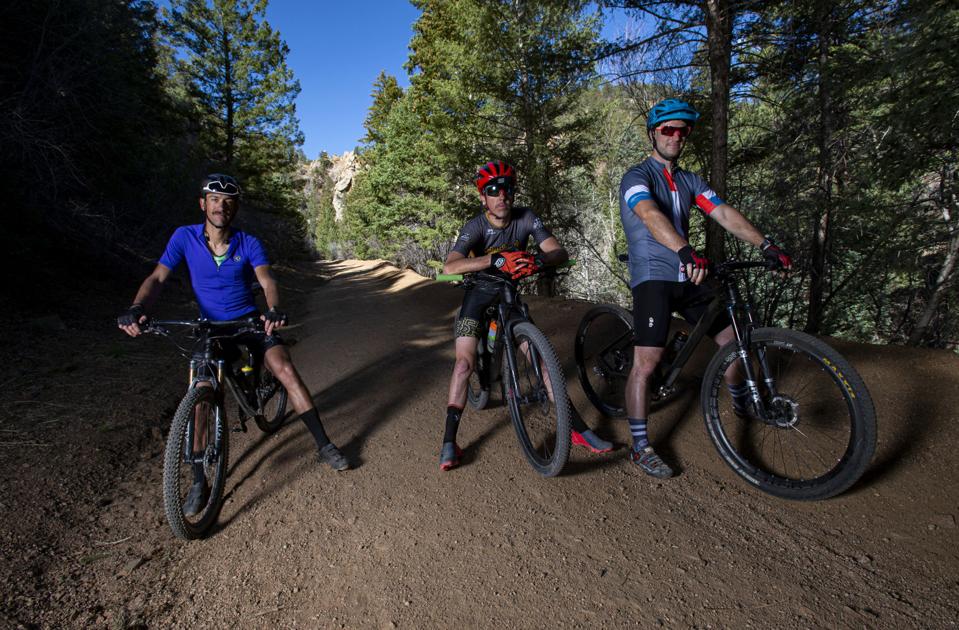 The hours ticked by the night of Saturday, April 25, and Josh Klute tossed and turned in his bed, unable to sleep.

The next day would bring an unprecedented challenge for him. For the Colorado Springs nurse stationed at intensive care units at the city’s UCHealth Memorial hospitals, the past two months have been defined by such challenges.

“There’s been a certain amount of inward stress that I know I’ve been exposed to,” said the soft-spoken Klute, 30. “Maybe more than most.”

But that Saturday night, it was not the thought of another 12-hour shift the next morning that kept him awake.

It was the thought of 125 miles and 31,000-plus feet of elevation gain on his mountain bike. All of that by riding up and down High Drive’s dirt stretch 26 times — to be racked up straight through, as the rules of “Everesting” dictate.

Yes, in the middle of a pandemic that has weighed heavy on him, Klute picked now to go for a challenge that had been on his mind for several months: a local equivalent of the world’s greatest vertical test.

Near 4:30 a.m. that Sunday, he met at the base of High Drive with his cycling coach, Nick Gould, along with two other local racers: Matt Bell and Jake Aisenbrey.

The four of them went on to quietly accomplish perhaps the Pikes Peak region’s boldest endeavor on two wheels in recent memory.

Gould, the local pro with two decades of sufferfest experience who more than doubled his prior elevation record on the mission, finished first in 16 hours and 55 minutes. Bell followed next in 18 hours, two minutes. Then Aisenbrey in just under 21 hours.

“These were my strong guys, obviously,” Gould said. “And (Klute’s) just like all my strong guys, but he probably works the most and trains the least, just because of his job. I don’t want this to come across bad, but he definitely had the least amount of training in his legs.”

Still, there was never a doubt in the coach’s mind.

“He’s got that really humble, quiet approach,” Gould says. “But he’s a guy who, if he says he’s gonna do something, you can trust he’s gonna do it.”

And so Klute did, finishing in 22 hours and 47 minutes.

His Strava data joined the Hall of Fame found on everesting.cc. Last week, fewer than 4,500 other “successful Everestings” had been logged on bikes worldwide.

Those exclusive ranks just might grow, as athletes with canceled races everywhere are using the pandemic to get creative.

“It’s a thing,” read a text message from Springs alpinist Ilana Jesse, a friend of Klute’s and fellow nurse, who used that same Everesting weekend to run 50 miles in her neighborhood. “It’s how some people are coping with the stress of the world we live in.”

“Pretty much every single competitive event in the world has been canceled, and people are chomping at the bit to use the fitness they developed for those events. And also to compete, because that’s a natural human tendency.

“So yeah. We’ve basically been swamped with submissions since the pandemic started.”

It makes sense to Klute.

“You know, these types of challenges and experiences in life can really bring reality into perspective,” he said. “At least I know personally, I like to have something tangible to face. Something tangible that I can attack, that I can push through and conquer. And right now, most of the world has been in a time of an intangible foe, and it’s hard to face something that we just feel powerless with.

“So I think it was a very timely challenge in that respect. It gave me something tangible to fight against.”

Tangible was the pain in his knees, the tendonitis flaring. Every up-and-down on High Drive was a hard-earned 2 1/2 miles and 1,150 feet of gain on loose gravel. To be Everested, 26 laps were required.

And every five or so, Klute would need to stop to Icy-Hot the knees, to pop ibuprofen to dull the ache. His mind wasn’t on food — it was hard to keep the mind on anything — but he’d force down calories. Muffins, bacon, cheese, whatever.

At night, it was dangerous to eye the shadows that toyed with the psyche — “sleep demons,” as pros know them, knowing also how to vanquish them.

But Klute was no pro. Mountain biking to him has always been “a side passion,” by his own description, “an outlet.”

Nonetheless, just as he commanded his body onward, he managed to train his mind.

“Your mind can go all sorts of places over those hours of climbing,” he said. “You could even turn it into a fight against corona.”

And that’s what he did. He made himself believe the enemy lurked at the next hilltop, or around the next bend, and to defeat it, all he had to do was charge right through.

It was a dark, lonely battle. But then toward the end in those post-midnight hours, a nursing friend came to ride with him. The friend fit in a lap between 12-hour shifts at the hospital.

“Having that support was so powerful,” Klute said. “We see that in other areas in life now. We need each other, you know?”

Two more friends came at the very end, at around 2:45 a.m. They came to drive him home.

And that was it. No celebration. Just exhaustion and a certain pride that Klute would keep to himself as he woke the next day, and then the day after that.

He was due back at the hospital for back-to-back 12-hour shifts. Back to facing that intangible foe.