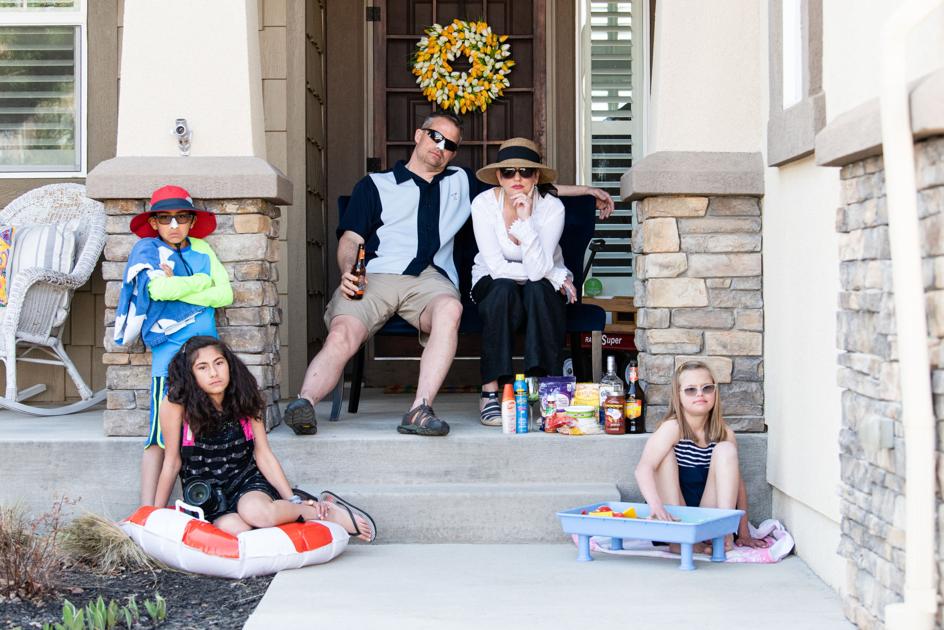 A good photographer can make even the most isolated and quarantine-bedraggled stay-at-homer look dazzling.

Ashley Valone’s northern Colorado Springs neighborhood had a favor to ask of the photographer. They inquired, via the neighborhood’s community Facebook page, if she’d consider taking photos of families on their front porches, all from an acceptable distance, of course. She was happy to oblige. Since March 29, she’s explored her slice of the suburbs and captured more than 50 families in front of their homes for her “Front Porch Project.” The photos can be viewed online at ashleyvalonephotography.com.

While some of those families decided to go with a downright festive theme, others decided a family portrait was more their style. One family of five, whose trip to Mexico got canceled due to the pandemic, donned their best beach gear.

“It’s a happy spot in the midst of the uncertainty of the times,” says Valone about her project. “It turned into something big that families have been so thankful for. It’s something to look forward to. This is a great reason to get dressed up and put on the makeup.”

John Paul Mintz and his wife decided a comedic theme was best and chucked their two kids in a “Free to a good home” box.

“It just seemed like family pictures at first,” says Mintz. “I sort of felt bad making light of a situation where so many people are experiencing such tremendous loss. Then I realized humor is just an outlet for grief — grief of the loss of freedom and connection. We are all in this together, and making a slightly silly pose for a camera allowed us to be involved in something outside our house.”

Getting out and about has helped Valone meet new people and bring the community together. The longtime photographer, who started doing it professionally early last year, has given each of the families five images, with the option to purchase more. It’s been a good way for her to keep practicing her craft while her business is at a standstill. But there’s also the sentimental aspect that touches her.

“It evokes emotions. I love seeing the families being together,” she says. “It’s like this unique time when parents can be home with kids who might otherwise not have this much together time. The kids seem relaxed. There’s joy in the families.”

As everything began to shut down in March, Kaiser watched her jobs shrivel up. The time was right to embark on a longtime dream — photographing her wildly socially diverse town. So she phoned up a neighbor and got the OK to take her first porch portrait. Some days later, after Kaiser was deemed nonessential by the stay-at-home order and forced to shut down her business, Alain and Maria Navaratne, from the MAC, reached out about collaborating on a photo project. Kaiser would take the photos, and the Navaratnes would do the back end work of getting waivers signed and such.

A call went out to Manitou residents, asking them to sign up to be included with the project. The requests poured in, including the owners of Adam’s Mountain Cafe, longtime artists Ken and Tina Riesterer and internationally recognized artist Floyd Tunson.

“I’ve lived here for 15 years. There are so many people I haven’t seen in such a long time,” says Kaiser. “I go over and see kids who were in fifth grade and now they’re in college. It’s a really emotional thing for me. I see neighborhoods I’ve never been in. It’s very diverse. You have super fancy houses and lawyers and doctors and the ex-mayor. Then we have people who live in little shacks.”

Now, weeks later, Kaiser has done almost 140 sessions with families, friends and individuals all hanging out near their windows or decorating the doorways of their homes or businesses. Some request a simple family portrait, while others want to add some color with accessories, such as chickens and dogs. Photos can be seen online at noasartphoto.shootproof.com/gallery/stillmanitou.

“I love this town,” Kaiser says. “If this is my last gig, this would be it. My heart is really in it.”