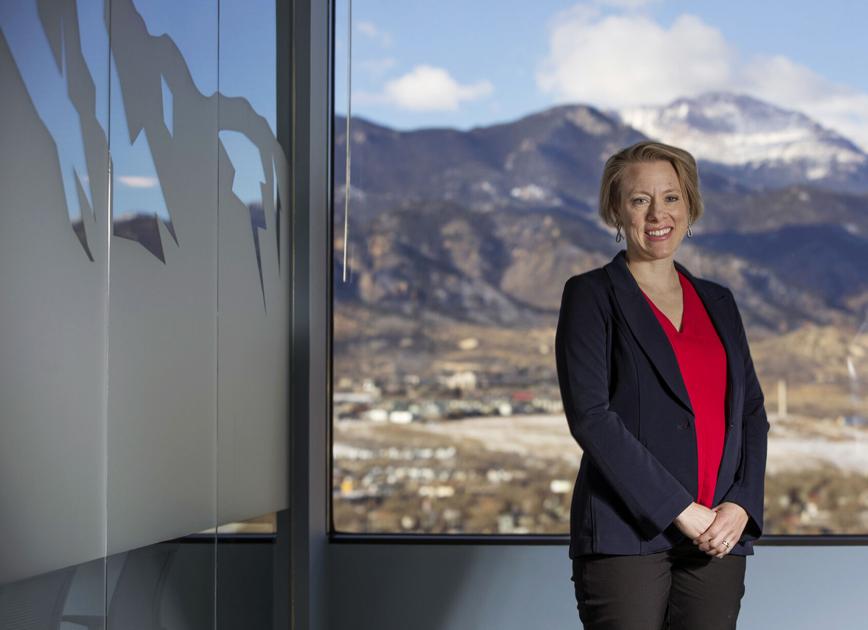 Her first year on the job was not one Cecilia Harry could ever have envisioned.

She stepped into her role as chief economic development officer for the Colorado Springs Chamber & EDC in December 2019. She and her family had moved from Wisconsin, where Harry had been president and CEO of Envision Greater Fond du Lac, the combined chamber of commerce and EDC for that community. She was eager to dive in, to shake hands with business and city leaders, to attend gatherings and visit key employers.

And then the pandemic took hold.

“I got my 90-day review in quarantine,” she recalls.

Unique challenges were ahead.

“This role is supposed to be so visible and so connected throughout the business community and the greater Colorado Springs community,” she says. “There’s been so many lost opportunities to better understand the region, through touring facilities and being in the same room as people.”

So she turned to the virtual workspace to make connections and build relationships, with Zoom meetings replacing in-person group meetings and one-on-one sessions over coffee. She helped Chamber & EDC President and CEO Dirk Draper develop a Regional Recovery Council, consisting of health officials and members of the economic development community, to deal with the business impact of the pandemic. She helped lead the way as the Chamber and EDC’s focus shifted more to helping local businesses simply survive. In December, the 38-year-old Harry was named to the Association of Chamber of Commerce Executives’ 2020 “40 Under 40” list of emerging leaders shaping the chamber of commerce industry.

“Our community hit the jackpot when Cecilia came to the Chamber & EDC,” Susan Edmondson, president and CEO of the Downtown Partnership of Colorado Springs, said in an email. “She’s a true practitioner: building relationships at the local, state and national level; using data effectively; and always thinking strategically and holistically.”

Harry was born in Maryland and grew up largely in Minnesota. Her dream job at one point was an engineer.

“I was just very good in schools with math and science, and thought it would be a fun way to apply that,” she says. “And then I got to college, and in about two weeks I realized I did not mesh well with physics, and that was that.”

Eventually, after enjoying a summer psychology class at a community college, she changed her major and earned a bachelor’s degree in psychology from the University of Notre Dame .

After graduating, she was headed toward a career in social work, working as a case manager for the Indiana Department of Child Services and often dealing with abuse and neglect. She then headed to Washington University in St. Louis to earn a master’s in social work and economic development.

A fateful bus tour with a professor in her master’s program opened her eyes to a different way of helping children and families.

That tour, she says, “told the story of a community that really lost all of its wealth and was devastated by some business decisions being made by leaders outside of the community. And so it was a chance for me to see how business decisions and growth decisions have an impact on families and their communities. And I liked that idea of working with businesses and local government to make sure that growth and change happen in a way that includes (those families) and brings them along on the path to growth.”

The entity in Fond du Lac was a combined chamber and EDC, similar to Colorado Springs. But it had made the switch just days before Harry came on board. So, she says, “there was a lot of continuing work to make the merger successful.”

She wasn’t looking to greener pastures when the Colorado Springs job opened up, but she learned of it through a recruiter and was intrigued.

Midsized cities like Colorado Springs, she says, “are just a really fun, lively community to serve, and they’re getting more and more recognition as a great place to relocate families and relocate companies and grow companies.” The Springs’ high rankings in various quality of life surveys were also a lure for Harry and her husband, Andrew, who have two young sons, ages 2 and 5.

There was plenty of competition for the Springs job, with applicants from across the country, says Chamber & EDC head Draper.

And there were plenty of things that made Harry stand out.

“I liked the fact that she had a background in social work, that she had worked in that field,” Draper says. “She views economic development as helping people find jobs and is very focused on individuals.”

“She really has empathy for people,” he says. When a company expands, when a business creates job, “she knows there’s an individual whose life will be improved.”

“I’m really pleased with how she has settled into the community, especially given the challenges of the COVID pandemic,” Draper says. “She has jumped right into community workforce issues. She’s been involved since we started the Regional Recovery Council with the public health department back in April to deal with the pandemic and get the economy open sooner.”

One of the Chamber & EDC’s missions — attracting new businesses — has taken a back seat during the pandemic, Draper says.

“Most of the companies we were working with on attraction projects, they canceled or tabled those decisions,” he says. “So many in corporate America are evaluating their real estate footprint and how they operate and what their offices of the future look like, so most of those decisions were put on hold.”

Still, how a community responds to the pandemic and nurtures its existing businesses could be key in attracting those new businesses down the road, Harry says.

“The philosophy I bring to our economic development services is that if you take care of your existing businesses first, so many other elements of economic growth fall into place. So if you have those relationships and you’re listening to your existing business community and helping them address issues related to workforce, infrastructure, real estate, business climate, etc., those are all elements that new companies are looking for as well.”

She’s optimistic about 2021, particularly the second half of the year. “We’re in touch with site selectors and projects that are looking at the area. We know many of those will pick up again.” The Regional Recovery Council, meanwhile, will morph at some point into a Business Continuity Council “to stay connected and refine disaster preparedness plans to enhance resiliency and recovery for the next natural or man-made disaster that affects the Pikes Peak economy,” Harry outlined in a September report.

Harry is also psyched about a change in dwellings. The family rented a home for the first year but has just moved into a house they bought. Working from home during the pandemic, Harry had set up her home office in the master bedroom in the rental house. “I’m very excited that in the new house, it won’t be the same place I sleep in.”