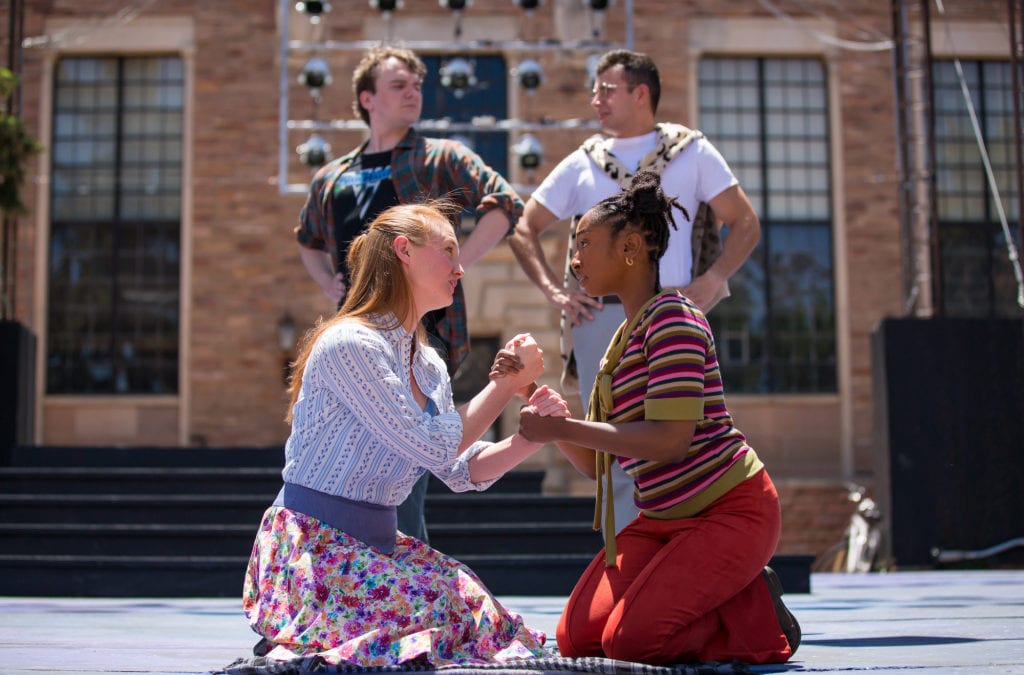 Last summer was the first in decades where the long-running Colorado Shakespeare Festival didn’t dazzle audiences with fully staged productions, due to the pandemic.

“I can’t wait for opening night,” said Timothy Orr, Colorado Shakespeare Festival’s producing artistic director. “The excited buzz of an opening is always amazing, but I have a feeling this one will be something really special.”

While all shows for this season are currently sold out, there is an option for interested parties to put their names on a waitlist — although Orr doesn’t necessarily see this as a method to secure admission.

“At the moment, it looks unlikely we can open up more seats,” Orr said. “It’s really complicated when you’ve been selling reserved seats for 10 months and we want to be very safe until we’re completely out of this situation.”

Virtual options for small-cast performances of “Much Ado About Nothing” and “The Comedy of Errors” — that were recorded in August at Mary Rippon Theatre — can be purchased for $25 per household.

Starting off the in-person series is a revamped production of “A Midsummer Night’s Dream.” First performed around 1596, the comedic play — that focuses on four lovers and offers conflict, love triangles and meddling fairies — is among Shakespeare’s most loved works.

“Rehearsals have been great, but hot,” Orr said. “We’ve been rehearsing outside for safety protocols and it’s been warm. But in the evenings, the rehearsals come alive under the stars.”

While running lines and frolicking around an outdoor stage is no easy feat in the Front Range’s recent sweltering temps, actors welcome the opportunity to get back to live performances.

“Returning to the CSF stage has been the light at the end of the tunnel after a dark year,” said Denver-based actor Chloe McLeod. “The last time I performed with CSF was indoors in ‘You Can’t Take it With You’ as the ballerina, Essie, a role driven by physical comedy. This summer feels like a complete 180 from that experience — being outdoors on the Mary Rippon stage and playing one of Shakespeare’s witty, language-driven females.”

McLeod enjoys the candor and unfiltered nature of Helena.

“Helena is not afraid to say how she is feeling at any moment of the play and goes after what she wants with no apologies — how refreshing is that?” McLeod said. “I love her bravery, vulnerability, wit and determination.”

The production veers from the traditional wood-nymph aesthetic and ancient Greek setting and instead offers up the leopard-clad essence of the 1980s — complete with some chart-topping tunes of the time.

“To prepare, I rewatched ‘Freaks and Geeks’ and listened to Prince’s ‘Purple Rain’ album front to back,” said Maya Camille Boyd, a grad student at University of Houston, who plays Hermia in CSF’s production.

This isn’t the first time Boyd portrayed the strong-willed young woman. In December 2020, she played Hermia in University of Houston’s production of “A Midsummer Night’s Dream” that was set in the 1960s.

“I love how brave she is,” said Boyd, “It takes guts to go against not only your father, but the ruler of your land. I love what she stands for.”

Hermia faces off with her father, Egeus, in front of Duke Theseus — revolting against their patriarchal views and rejecting their demands for her to marry Demetrius, who she is not in love with.

Hermia is determined to follow her heart and be with Lysander instead. Her unwavering quality of loyalty and a desire to follow one’s truth, Boyd sees within herself.

While Boyd will eventually return to Texas to complete her master’s degree in theater, she is fond of the idea of traveling the country for more projects and one day hopes to return to a Boulder stage.

“I’d love to come back,” Boyd said. “This is such a great opportunity and the work is awesome. As things open up more and more, I’m excited to see what’s next for me.”

This version of “Midsummer” is sprinkled with ‘80s tracks and at one point the cast even breaks out into Queen’s “We Will Rock You.”

Puck — the infamous mischievous sprite — dons a studded belt and combat boots to achieve a look that is positively punk. At times, he seems to channel Billy Idol.

The talent-stacked play is sure to appeal to fans of traditional Shakespeare, as the language remains untouched and also bring up nostalgia for those who — back in the day — couldn’t get enough of Pat Benatar and modeled their style after Molly Ringwald in “The Breakfast Club” or “Pretty in Pink.”

“Expect to time travel to a John Hughes’ film in the ‘80s, where comedy comes from the heart and characters are larger than life,” McLeod said. “Mix in a fairy world of magic and get ready for a wild ride.”

While CSF brings the work of Shakespeare to life, organizers are also mindful to include plays outside of the English dramatist’s repertoire.

“We’re producing ‘The Odyssey’ the summer,” Orr said. “The audiences can expect an epic story, full of gods and monsters and a hero returning home.”

Aug.1 and 3, Shakespeare’s “Pericles” will be performed.

Not all the fun and action is reserved for the stage. In conjunction with CSF, a cross-section of youth-based educational programs are offered in-person and online.

From physical acting classes to stick figure drawing, attendees — ages 12-18 — will get to explore the work of the prolific writer in new and interesting ways.

One of the selected teachers, scheduled to conduct a virtual workshop on July 9, is New York City-based rap artist Devon Glover — known as The Sonnet Man — who pairs the lyrical language of Shakespeare with hip-hop beats to create a fresh and urbanized vibe.

“I first met Devon (Glover) at the annual conference for the Shakespeare Theatre Association in Dallas in 2020 — the last trip I took before the pandemic shut everything down,” Giguere said. “I got to chat with him about his work and also got to see him perform some hip-hop versions of the sonnets and I was blown away. His work is so present and he’s so connected with the text which isn’t easy to do with Shakespeare’s sonnets.”

From appearing on NBC’s “Today” to completing a three-and-half-hour sonnet marathon as part of the Stratford Literary Festival in 2016, Glover remains committed to the art form.

“The attendees of my virtual Shakespeare workshop can expect to view Shakespeare with new lenses,” said Glover. “Attendees should also expect a heightened level of creativity throughout the creative writing process.”

In addition to having much respect for The Bard, there are numerous contemporary artists Glover feels deserve praise.

“There are many exceptional writers in the hip-hop world,” Glover said. “Some writers that inspire me are Jay-Z, Talib Kweli, Eminem and Ghostface. I am a huge fan of Kendrick Lamar, H.E.R. and J Cole.”

Giguere said she respects the way Glover can relate the material to student learners.

“I love how Devon taps into the rhythm and structure of hip hop as a way to connect kids with Shakespeare,” Giguere said. “He takes a topic that might sound difficult and makes it so approachable, so engaging and so much fun.”

The full CSF summer ed programs kicked off earlier this month, but those interested in participating in several sessions have the option to purchase individual programs at drop-in rates of $35.

“If you are a student in any CSF program, I hope you come away with a sense of the wide possibilities embedded in these plays — but, ultimately armed with the knowledge that these plays belong to you,” Giguere said. “They are a tool for you to understand yourself, your peers and your world.”