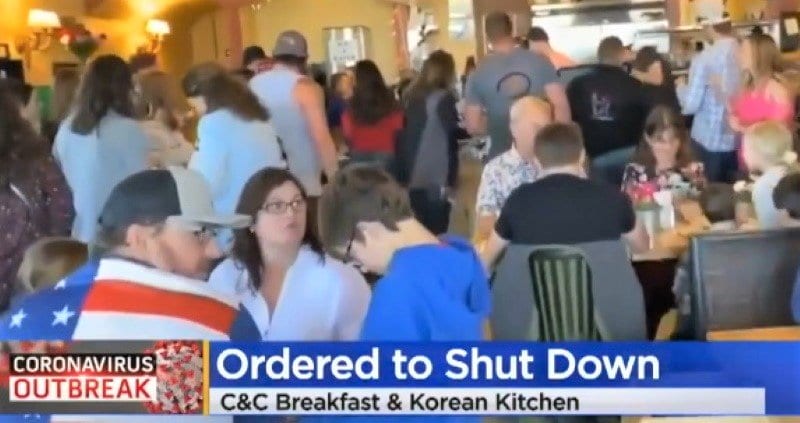 Get the latest BPR news delivered free to your inbox daily. SIGN UP HERE.

A Colorado restaurant was shut down and had its business license suspended indefinitely for defying lockdown orders to celebrate Mother’s Day last weekend.

April Arellano is the owner of C&C Breakfast and Korean Kitchen in Castle Rock, Colorado. She said she’s speaking with lawyers about the situation, which she called unfair and unconstitutional.

The brouhaha erupted on Mother’s Day, when C&C Breakfast reopened after closing in April pursuant to statewide business shutdowns. Arellano said she was surprised how packed her cafe got because her customers were so thrilled to return after being under house arrest for two months.

“I expected it to be busy. I never expected this,” Arellano told Colorado Community Media. “I’m so happy so many people came out to support the Constitution and stand up for what is right. We did our time. We did our two weeks. We did more than two weeks…and we were failing. We had to do something.”

A video of customers crowding into the restaurant went viral after social media users commented that the patrons did not wear masks or practice social distancing.

The Colorado health department reacted by shutting the business down for at least 30 days.

The next day (Monday, May 11), customers continued to line up and were served at C&C Breakfast and Korean Kitchen in defiance of the state health department’s shutdown.

I’m here at C & C restaurant in Castle Rock, Colorado where my colleague @nick__puckett took a video yesterday of the restaurant lined with people for Mother’s Day. Today, more folks dine-in even after they’ve been ordered by Tri-County Heath to shut down completely. pic.twitter.com/ouBu7LQHMs

In a statement, Polis said: “The Department of Public Health and Environment (CDPHE) has determined that C&C Coffee and Kitchen in Castle Rock is causing an imminent health hazard. CDPHE is using its authority under the Colorado Food Protection Act to suspend the license of the business indefinitely until it can be established that there is no longer a threat to public health.”

Governor Polis told reporters that “I joined most Coloradans in our frustration watching videos of people illegally packed into restaurants and thinking about all the moms and grandmothers and aunts and everyone who was put at increased risk of dying from this horrible virus.”

Colorado has a population of 5.8 million. So far, it has recorded 987 deaths attributed to the coronavirus.

In response to complaints that the parameters of statewide shutdowns were too vague and open-ended, Gov. Polis provided a timeline for when he will consider reopening businesses.

C&C Breakfast’s owner April Arellano said she had to reopen because she and her employees cannot survive without working because they need their paychecks.

This incident is the latest in a growing movement of Americans who are getting fed-up with indefinite house arrest and business shutdowns.

In Seattle, a police officer posted an emotional video where he urged his fellow cops not to abuse people’s Constitutional rights by enforcing “tyrannical lockdowns.”

Anderson responded by saying: “I have been placed on administrative leave (still being paid) pending investigation. I was told by both the agency and my union that this will result in termination due to it being an insubordination charge for refusing to take down the video. I’m not sure what the timeline looks like. I walk un-intimidated into the fray.”

Seattle cop urges police not to enforce ‘tyrannical orders,’ even if it costs their job: ‘We don’t have the authority’ https://t.co/fTkrMnd08w pic.twitter.com/mVNhbcS7Kv

Samantha Chang is a senior staff writer for BizPac Review. Based in New York City, she is a financial editor and lawyer.