Colorado regulators hear dueling testimony on how close fracking should be to homes, schools 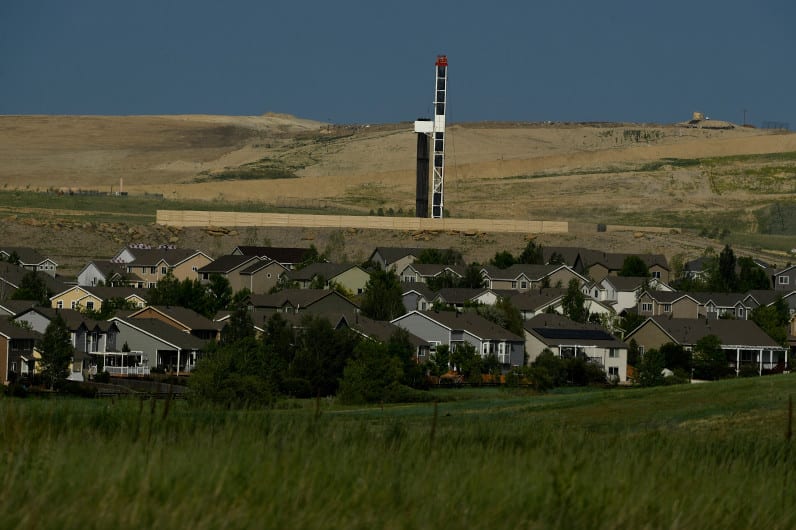 Dueling health studies, conflicting conclusions and differing reports from people living near oil and gas sites and from companies dominated a hearing Friday on rules for how far wells should be from homes and schools.

The Colorado Oil and Gas Conservation Commission heard from its staff as well as oil and gas companies, environmental organizations and people concerned about the potential health risks from drilling in populated areas. Setbacks, the distance between wells and sites such as homes or schools, are among a series of proposals the COGCC is considering as it undertakes a mandated overhaul of the state’s oil and gas regulations.

But the distance of setbacks is one of the most controversial aspects of an issue that has roiled communities and policy makers for the past several years — expansion of oil and gas development in Colorado, particularly in and near neighborhoods.

“It’s a critical rule that has received a great deal of attention. It has also caught the attention of the state of Colorado over the course of many of the last years I have worked for the commission,” said Julie Murphy, the COGCC director.

The staff crafted the proposed setbacks after a careful review “of the wealth of scientific information” on health effects, a review of other states’ regulations and meeting with different interest groups, Murphy said.

The COGCC staff has recommended a minimum setback of 2,000 feet from a school or child care center. For homes, the requirement would be 500 feet for fewer than 10 residential units or a minimum of 1,500 feet from 10 or more residential buildings or multi-unit residences.

Dave Devanney recently moved to the Front Range after years of living in Battlement Mesa in western Colorado. He headed Battlement Concerned Citizens, which sued to try to stop drilling near homes in the western Colorado community.

“Listen and talk to the people who have lived near oil and gas,” Devanney told The Denver Post. “I don’t think anyone who’s lived there will tell you that 500 feet is adequate.”

“This setback takes what was a de facto setback and makes it a statewide requirement,” Deranleau said.

Another difference is that the setback would be measured from the edge of the well pad rather than the well head and other production equipment, which might be in the center of the pad, he added.

Several environmental and community organizations support setbacks of at least 2,500 feet. Industry representatives generally supported the proposed setbacks, while voicing concerns about their application to the different densities of buildings.

In 2018, Colorado voters rejected an initiative to mandate 2,500-foot setbacks for oil and gas wells.

Tami McMullin, a toxicology consultant formerly with the Colorado Department of Public Health and the Environment, was part of an industry panel. She oversaw the development of a state health report released in 2019 that said people living within 2,000 feet of fracking sites could face an elevated risk of short-term health impacts — such as nosebleeds, headaches, breathing trouble and dizziness — in worst-case scenarios.

While with the state and afterward, McMullin said she and other researchers rigorously reviewed data and extensive air samples collected across Colorado. She said the samples showed that concentrations of toxins were below levels considered harmful.

“Based upon the weight of evidence and the extensive body of monitoring data, there is no causal data demonstrating the need for further risk-reduction measures beyond those which are already being applied,” McMullin said. “Specifically, there is no credible evidence supporting the need for greater setback distances in order to protect public health.”

A pediatrician from Pennsylvania and a consultant for the Southwest Pennsylvania Environmental Health Project cited research to convey a different message. Dr. Ned Ketyer said a growing body of peer-reviewed research shows that living near oil and gas operations is hazardous to public health. He said there is a growing consensus that the minimum setbacks from wells should be greater than the current 500 feet in place both in Colorado and Pennsylvania.

The hearing will continue Tuesday.