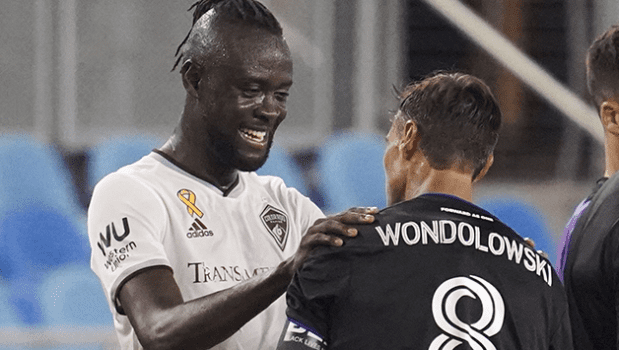 He’s 36 now, but Colorado Rapids forward Kei Kamara is still getting it done, and he doesn’t have the look of someone who plans on slowing down anytime soon.

One of the most prolific goal-scorers in MLS history racked up another big-time tally in the Colorado Rapids’ 1-1 draw against the San Jose Earthquakes, nodding home the equalizing goal in the 81st minute, just 17 minutes after entering the match as a substitute.

It was Kamara’s 129th MLS regular season goal, placing him fifth on the all-time scoring charts and 32 goals behind MLS’s all-time leading scorer, San Jose’s 37-year-old Chris Wondolowski, who scored the opening goal of the match on a penalty kick.

“I think with Kei you have to start with genetics,” Rapids coach Robin Fraser said. “He’s obviously physically gifted. At his age, he’s as strong as can be. He’s still fast, good timing, good jumper. He’s definitely blessed with good genes. And he takes very good care of himself. On top of that, he’s become a student of the game as he’s gone through it for so long. So, if you’re an intelligent player and you take care of yourself, and you have good genes, you can have a long career.

“I think he still has plenty to give.”

Kamara has come off the bench in three straight matches after picking up a knock in training prior to the August 22 match against Real Salt Lake.

The assist-man on Kamara’s goal on Saturday was 19-year-old midfielder Cole Bassett, who sent in the corner kick that allowed Kamara to do what he’s done so many times before: Win an aerial duel and get the ball into the back of the net.

Bassett said he’s soaking up all the knowledge he can from Kamara while he still can, adding that he hopes to use the mentor-type relationship in a similar way as Bayern Munich star Alphonso Davies, who had a famously close relationship with Kamara when they were both members of the Vancouver Whitecaps.

“Kei’s been really big for me,” Bassett said. “Ever since he moved to the team last year he’s kind of been a, not really a father figure, but he’s helped me out a lot because I was playing the No. 10 a lot last year and he was the No. 9 and we had a good partnership going where I’d always try to be underneath him and he would try to find me with the ball as much as possible. I think this is the first time we’ve actually linked up on a goal that wasn’t preseason. So it felt really good to finally get him one.

“But he’s helped me a lot. Position-wise, always just knowing how to be close enough to him so he can lay the ball of to me and we can go from there. And he’s such a threat in the box, so he’s always telling me where to put it, where he likes to run and stuff like that. So, it felt really good to finally get him a goal. But also I know I still have a lot to learn from him because he’s been at the top level for a while now and there’s a reason why he’s scored so many goals in MLS. So hopefully I can continue to learn from him, kind of like Alphonso did and continue to go from there.”