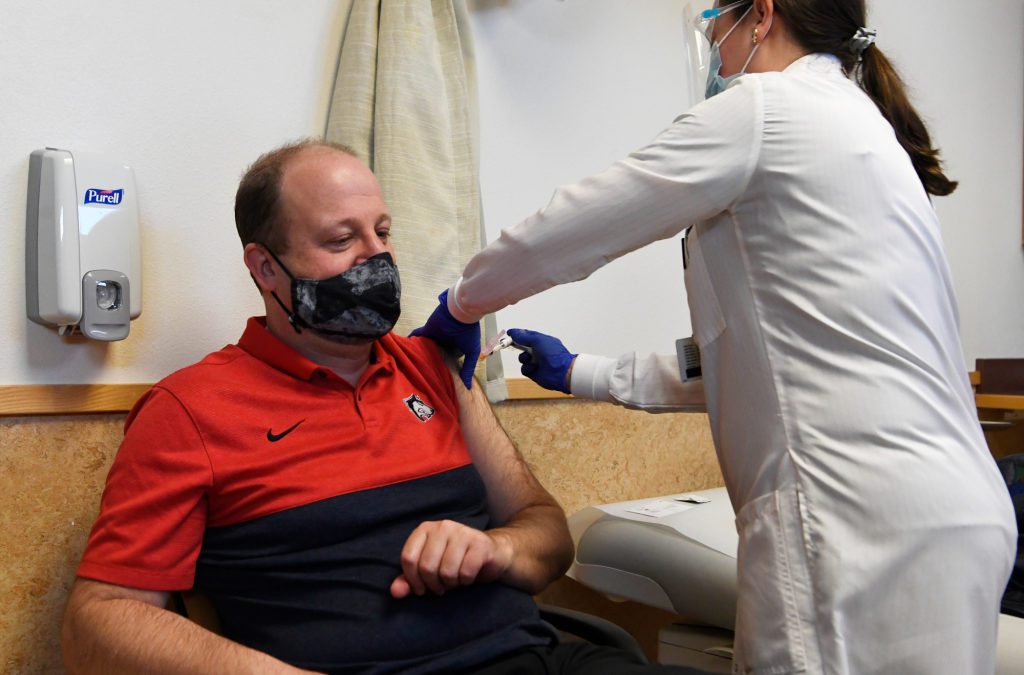 Colorado will hand out $5 million — $1 million each to five lucky winners — in an effort to encourage residents to get vaccinated against COVID-19, as the number of shots given to ward off the deadly disease has dropped in the last few weeks.

Gov. Jared Polis announced the new vaccination incentive program, dubbed Colorado Comeback Cash, on Tuesday afternoon at the Governor’s Mansion. He was joined by several state officials as well as the deputy director of the Colorado Lottery.

“All you have to do to enter is get vaccinated,” an ebullient Polis said during a news conference. “This is a million dollars cash on the barrel today. May the odds be ever in your favor, Colorado.”

The $1 million awards will be handed out starting June 4 and will continue weekly through June 25. A final $1 million prize will be announced on July 7. Polis said to be eligible for all five drawings, residents should get vaccinated by the end of May, but those who get vaccinated in June are still eligible for upcoming drawings.

Winners must be at least 18 years old and will be chosen through a random drawing run by the Colorado Lottery, with anonymous numbers assigned to people who have received the vaccine and those numbers chosen at random and matched to a winner.

There is no need to sign up or register for the drawings, Polis said, and everyone who has been inoculated since vaccines first arrived in Colorado in December is eligible.

“When we get vaccinated, we hit the jackpot,” the governor said.

According to data from the Colorado Department of Public Health and Environment, nearly 2.5 million Coloradans have been fully immunized against COVID-19, while nearly 3 million have received at least one shot. But the pace of vaccinations has decreased since late April, when more than 300,000 doses were administered in a week. For the week ending May 16, that number had gone down to 210,000.

The peak for shots in arms in Colorado came early last month, when more than 420,000 shots were administered during the week ending April 4.

Polis said there will also be scholarship prizes for Coloradans ages 12 to 17 as part of the initiative.

The governor boasted that odds of winning $1 million are one in 500,000, “better than Powerball.”

The program announced Tuesday echoes similar vaccination incentive efforts that have been introduced in other states, like New York, Ohio and Oregon. The Associated Press reported Tuesday that Maryland will hold the first of its $40,000 lottery drawings for people who have been vaccinated against COVID-19.

That state’s drawings will continue for 40 consecutive days, culminating in a final drawing on July 4 worth $400,000.

Last week, Ohio health officials announced that since that state’s Vax-a-Million campaign launched on May 13, it has helped drive an increase in vaccination rates among Ohioans 16 and older by more than 28%.

Money for the $5 million in prizes in the Colorado Comeback Cash program comes from Coronavirus Aid, Relief, and Economic Security Act, known as the CARES Act, passed in March 2020 at the beginning of the pandemic.

On Wednesday morning, U.S. Rep. Diana DeGette, D-Denver, will preside over a congressional committee hearing on vaccine hesitancy, which a newly released study from the Centers for Disease Control and Prevention concluded remains a “major barrier” to inoculating more rural Americans across the country.

A recent survey by the Kaiser Family Foundation found that one in five Americans living in more rural parts of the country said they are “definitely not” getting the vaccine, while another 9% said they would get one “only if required.”

More than half of U.S. adults are now fully vaccinated against the virus.