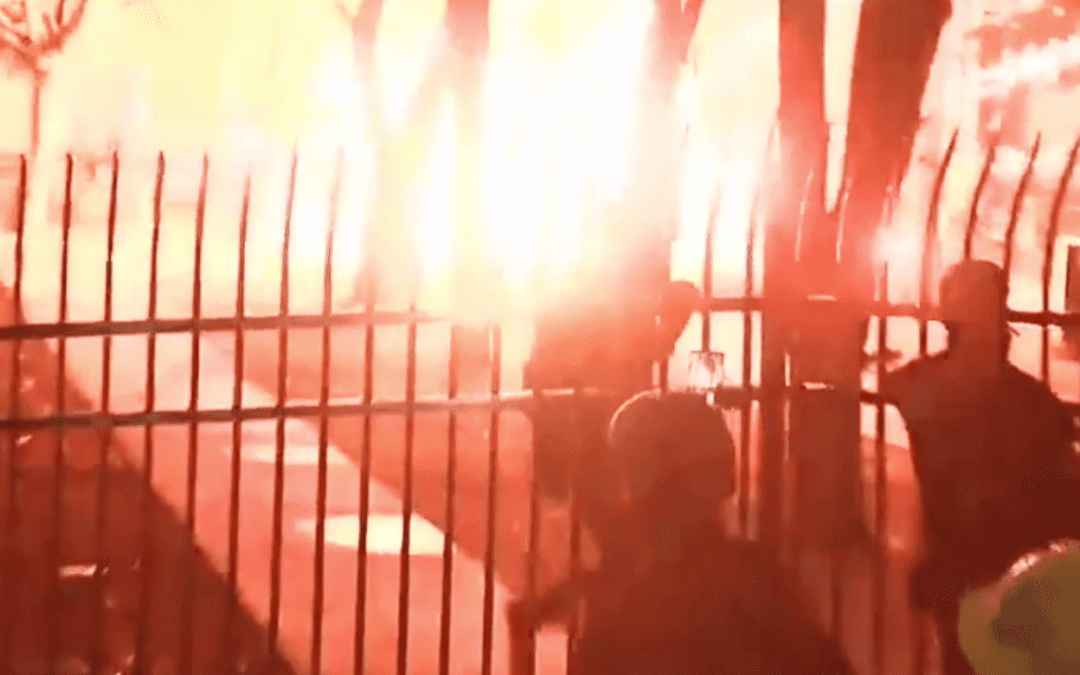 AURORA, CO– In July, amid the destructive and violent riots, hundreds of protesters allegedly barricaded police officers inside an Aurora precinct for several hours, according to a report.

On Thursday, September 18th, six individuals were charged in the incident, accused of attempted kidnapping and inciting a riot.

According to FOX 31 in Denver, the 17th Judicial District Attorney’s office said in a statement on Thursday:

“Around 600 protesters surrounded the Aurora Police Department District One station on July 3, blocked off streets around the precinct and used “wires, ropes, boards, picnic tables and sandbags” found nearby to cut off access to exits”

The report stated that there were 19 officers trapped inside the precinct for several hours until the protesters were dispersed by the police department’s Emergency Response Team around 3 a.m..

“Some members of the group carried handguns and rifles and wore military or tactical clothing,”

5 from the Party of Socialism and Liberation charged with felony kidnapping and inciting riots after well armed rioters unlawfully barricaded the doors of an Aurora Colorado police precinct with officers inside in an attempt to occupy the facility in Julyhttps://t.co/JxfhjffheV

This incident occurred when protesters organized what they called on social media, an “occupation” of the precinct. Their motive for doing this was to force police to fire two officers over the police-custody death of Elijah McClain in August 2019.

Leaders of the group demanded the firing of the who officers, or they would “occupy” District One, stating that “no one would come in or out” until their demands were met.

“We support the First Amendment right of people to protest peacefully in our community but there is a difference between a peaceful protest and a riot,

“When individuals cross the line and break the law, they will be prosecuted.”

Here is a list of those convicted, and their charges:

The suspects are part of the Party of Socialism and Liberation, which called for the charges to be dropped, claiming on Facebook the charges criminalize protesting.

“Those arrested were the leaders to demand justice for Elijah McClain, who was brutally murdered by the Aurora Police Department,

“They are still in jail, with the exception of one person. They are facing multiple felony charges and years in prison in an obvious frame-up aimed at stopping the movement for justice for Elijah McClain.”

Police agencies in the Denver area arrested anti-war organizers in a coordinated assault today. People were arrested in a Home Depot parking lot, at their homes, and after they were pulled over while driving. Those arrested were the leaders to demand justice for Elijah McClain, who was brutally murdered by the Aurora Police Department. They are still in jail, with the exception of one person. They are facing multiple felony charges and years in prison in an obvious frame-up aimed at stopping the movement for justice for Elijah McClain. Drop the charges!

Please join an Emergency Livestream tonight, Sept. 17th for updates on this developing situation, and the PSL’s plans to mobilize against this government attack.

Posted by Party for Socialism and Liberation – PSL on Thursday, September 17, 2020

Given all that has occurred in the last several months, police officers are retiring at a record rate, and who can blame them!

COLORADO – Back on June 19th, Colorado Governor, Jared Polis signed a sweeping police reform bill into law. The impact? So far, over 200 law enforcement officers have resigned or retired.

Technically, state data makes it unclear as to how many of those separations are a “direct” result of the new law, but interviews with chiefs of police and union officials suggest a number of them are exactly that, a direct result.

Now, the state’s largest police organization has launched its own survey to find out.

According to a , between June 13th, the day the legislature passed the bill and August 7th, agencies statewide reported that 241 officers left their department. This number does include those that were fired as well sworn police officers and sheriff’s deputies, and officers that are not POST-certified.

Law enforcement agencies are required to notify POST within 15 days of an officer’s separation, however, they are not required to provide the reason for it or the position they held. So, it is possible that some officers simply transferred to another department within another state.

Mike Violette, executive direction of the Colorado State Fraternal Order of Police and a Denver sheriff’s deputy said in a statement:

“No doubt there’s an impact from SB 217, but we can’t put numbers on it yet. We’re hearing the officers are concerned about being in the profession and what’s happening. That’s why we are running a statewide survey to find out.”

The sweeping police reform bill, titled, “Senate Bill 217,” set limits on police use of force and mandates data collection to make sure officers who are fired from one agency do not get hired by another.

Among other changes, the bill also bans the use of carotid holds, limits when police are allowed to shoot a fleeing person, and requires officers to intervene in cases of excessive force or they will face criminal charges.

Senate Bill 217, the Law Enforcement Integrity Act, has passed with a vote of 32-1 in the Colorado Senate. https://t.co/3bOGcla8pk

The bill requires all officers to use body-worn cameras (body-cams) and that departments release the footage within 45 days. The bill also allows for officers to be held personally liable for civil rights violations.

The bill has wiped away qualified immunity as now officers can be sued personally and held liable for 5% of any judgement or settlement against them or $25,000, whichever is less.

In response to this police reform bill, many officers across the state are expressing grave concerns. Aurora police officer Judy Lutkin, who is a 30-year veteran and is also the president of the Aurora Police Association said:

“I’ve talked to many officers who are concerned about this bill and what it looks like the impact will be to them. We’re scrambling to figure out the insurance bit, to prevent officers from losing their houses when they’re acting in good faith.”

Lieutenant Bob Shaffer of the Loveland Police Department gave additional insight to this bill harms the many officers who give their careers to protecting and serving their communities.

“When SB 217 passed, it put some officers over the edge to take early retirement. There is a significant fear of being vulnerable and unsupported that is causing a lot of officers, at a minimum, consider leaving employment and moving out of the state entirely.”

Shaffer said as many as 10 officers in the Loveland department have said they intend to retire as a result of the new law. Denver Detective Nick Rogers, a 35-year veteran of the department and who is also president of the Denver Police Protective Association shared his thoughts on the new bill.

So excited that #GreenwoodVillagePD has decided to essentially nullify Colorado Senate Bill 217. Someone has to take a stand for the good officers out there. Unfortunately, there are idiots like @SenRhondaFields who claim they can’t do that and don’t support it. They can. 🖕🏻

He said that between the risk of allowing the city to decide when and if an officer is not acting in good faith along with the dramatic shift in the public protests against police, he is also considering cutting his career short.

“I have decided to leave myself, perhaps in a year or two rather than the four or so I had planned on. Being a cop isn’t the same as it was yesterday. My profession changed on me, I didn’t change on my profession. To me, I didn’t quit on society, it quit on me.

“We went from 100% love in the community during this pandemic, then overnight all of us became the devil and we didn’t deserve it. Get the dirty ones out, get rid of them, but 99.9% of us are good. Society screwed all the good cops and it’s not right.”