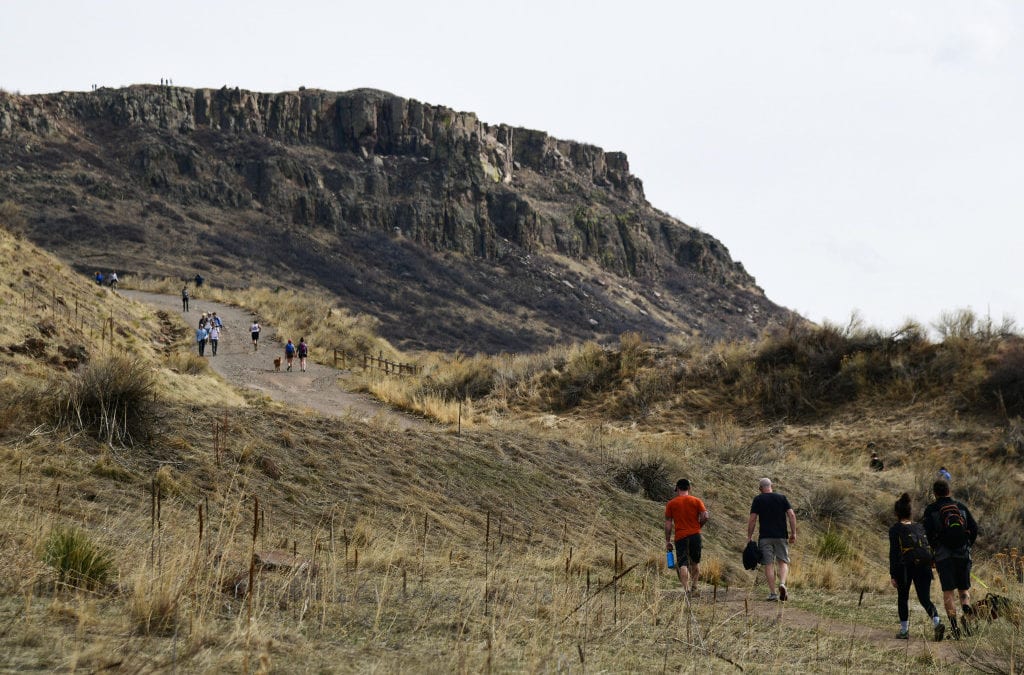 With almost all schools, entertainment venues and some workplaces now closed in Colorado, restless residents are heading to one of the few places where they can still go: the great outdoors.

“We were feeling cooped up in the house — and this is a place where you can practice social distancing,” Yon Boone, a college football coach, said as he loaded his family back into his SUV after a hike at Bluffs Regional Park in Lone Tree on Wednesday. “We wanted to get out and about.”

Coloradans are flocking to parks and trails to reduce the stress brought on by a global pandemic that shows no signs of slowing. The coronavirus has shuttered ski slopes, restaurants, movie theaters and gyms in Colorado over the last week as it has infected at least 363 people and killed four. Thus far, Colorado hasn’t issued a statewide shelter-in-place directive, as has occurred in California, New York and Illinois.

One park Coloradans can no longer visit: Rocky Mountain National Park, which was closed to the public Friday evening after the mayor of Estes Park said the number of visitors created a “grave public health concern.”

“We have an older, high-risk population with many retirees and limited critical resources,” Mayor Todd Jirsa wrote in a letter to Interior Secretary David Bernhardt.

The closure came days after the federal government waived entrance fees at national parks. Several other national parks have also closed since then, including Yosemite, Muir Woods and the Statue of Liberty.

Jefferson County isn’t talking about closing its 27 parks, but it is seeing record use of the 56,000 acres of open space.

“In challenging times, like we have here, we’re not at all surprised people are turning to us as a resource,” said Matt Robbins, community relations manager for Jefferson County Open Space. “We just ask people be thoughtful about it.”

According to tracking numbers for the system’s parking lots, Tuesday’s attendance set a record for that day of the week and Monday was the second-busiest Monday ever, exceeded only by a Labor Day. The numbers came from a partnership with Lot Spot, a company that can track arrivals and departures at parking lots via remote cameras.

The Warburtons, teachers whose Douglas County School District will be closed at least until April 17, were among the many visitors to North Table Mountain Park.

“We try to do ‘ing’ every day — biking, walking, hiking, rollerblading,” Michael Warburton said as cars drove in circles searching for a parking space at North Table Mountain Park.

This week, county officials posted a notice on the social media site Nextdoor warning: “Jefferson County Open Space parks are crowded!” The message urged people to keep their distance from others while out on trails and bring hand sanitizer, because some parks do not have running water for hand washing.

The open space department also advises high-risk visitors, such as older people or those with existing health conditions, to use “discretion” before venturing out.

Eight miles south of North Table Mountain, at Matthews/Winters Park in Golden, Ryan Nielsen said despite nearly 2,500 acres in the park, he was feeling claustrophobic walking the trails with his wife and kids.

“You’re just passing people all the time — just constant passing,” said the Thornton resident and teacher. “But at some point, we had to be outside a little more.”

Bobbi Jo Poepping of Lakewood said she had to get out, too. The dental hygienist was laid off Monday after the American Dental Association recommended that dentists avoid scheduling nonessential appointments because of the virus.

“I feel like I’m cooped up already, and it’s only Wednesday,” she said, as she sat on a boulder near a trailhead at Matthews/Winters Park.

People were keeping their distance from each other at Toepfer Park in Highlands Ranch this week. Several kids romped on playground equipment while parents sat on benches, keeping plenty of space around them. Stephanie Hunn, an employee with the city of Arvada who was visiting the park with her two dogs, said she had just started working from her home after Arvada closed all city facilities.

With her gym dark, Hunn said, she was out looking for a spot to go to take her mind off the pandemic.

“I think it’s very important for our mental health,” she said. “And it’s lucky we have this in our backyard.”