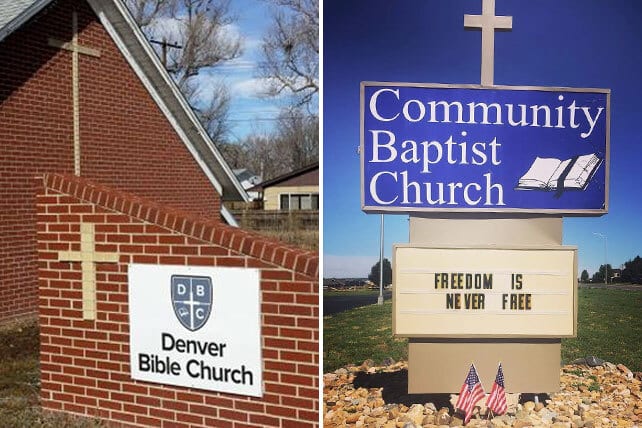 A federal judge has granted a preliminary injunction to two churches in Colorado, exempting them from state orders saying that houses of worship must limit attendance and require attendees to wear masks. Judge Daniel D. Domenico’s ruling on the Colorado mask mandate and worship attendance limits centers on the argument that the state of Colorado is treating houses of worship differently from businesses or secular gatherings.

“The court does not doubt that the State made these decisions in good faith, in an effort to balance the benefits of more public interaction against the added risk that inheres in it,” said Domenico issued Oct. 15. “But the Constitution does not allow the State to tell a congregation how large it can be when comparable secular gatherings are not so limited, or to tell a congregation that its reason for wishing to remove facial coverings is less important than a restaurant’s or spa’s.”

Pastor Robert A. Enyart with Denver Bible Church in Wheat Ridge and Pastor Joey Rhoads with Community Baptist Church in Brighton filed their lawsuit in August. The plaintiffs claimed that Gov. Jared Polis’ orders violate the Free Exercise Clause of the First Amendment of the Constitution and violate the Constitution’s Fourteenth Amendment because of their vagueness. The plaintiffs also took issue with the defendants’ implementation of the , the CARES Act, and the Colorado Disaster Emergency Act (CDEA).

In addition to Gov. Polis, the suit lists Jill Hunsaker Ryan, Executive Director of the Colorado Department of Health and Environment (CDHE), and the CDHE as defendants. Also listed are Steven T. Mnuchin, U.S. Secretary of the Treasury; Chad D. Wolf, Acting Head of U.S. Homeland Security; and Alex M. Azar II, Secretary of the U.S. Department of Health and Human Services.

The Constitution and the Colorado Mask Mandate

for wearing a mask says that people must wear one when indoors in a public place, with certain exceptions. For example, under the Colorado mask mandate patrons must wear a mask when entering, exiting, or walking around a restaurant, but may remove the mask when they are seated. Laypeople in houses of worship are required to wear a mask at all times. Clergy are exempt from wearing a mask when in spaces not accessible to the public or when a clergy member is officiating a service.

In his ruling, Domenico said that the court makes it a practice to defer to the state, recognizing “the complex interaction between constantly evolving scientific understanding and policymaking.” This posture does not mean, however, that the court has no role to play, nor that the Constitution is irrelevant. While all people must comply with restrictions when they are applied in a neutral way, the judge said,

The First Amendment does not allow government officials, whether in the executive or judicial branch, to treat religious worship as any less critical or essential than other human endeavors. Nor does it allow the government to determine what is a necessary part of a house of worship’s religious exercise. Those fundamental principles, which involve no balancing or second-guessing of public health officials’ scientific analysis or policy judgments, require the court to grant Plaintiffs’ motion, in relatively narrow part.

The state, said Domenico, is being inconsistent in how it is enforcing the Colorado mask mandate and other restrictions on houses of worship compared to businesses that have similar situations. The judge noted that he did not find the plaintiffs’ other complaints to be compelling. “Although Plaintiffs have not demonstrated a likelihood of success on the merits of most of their asserted claims,” said Domenico, “they have demonstrated a likelihood of success on their First Amendment free exercise claim against the State Defendants.”

According to CBSN Denver, the state of Colorado is planning to appeal the judge’s injunction. A spokesperson for the governor’s office referred to the case as “pending litigation” and said that, in the meantime, the Colorado Attorney General has filed an emergency injunction to ensure the orders stay in place.

The Thomas More Society, which is also representing Pastor John MacArthur in his legal battle against the , represented the pastors in the Colorado case. Special Counsel Rebecca Messall said, “The lawsuit calls both the federal government and Colorado leaders into account for their violations of the right to free exercise of religion, among other abuses of power, primarily resulting from Governor Jared Polis’ COVID-19 related Executive Orders.”

Colorado Politics reports that religious leaders in the state have mixed opinions on the ruling. Rev. , pastor of New Life Church in Colorado Springs, said, “I think it’s the right ruling. The vast majority of churches are going through extraordinary measures to keep people safe, and the government restrictions are not necessary.”

The Right Rev. Rev. Kimberly D. Lucas of the Episcopal Church in Colorado said, “I consider the governor’s orders, which are based on scientific evidence regarding the spread of the COVID-19, the bare minimum we can do.”

Denver Bible Church and Community Baptist Church are not the only Christian organizations in Colorado engaged in litigation with the state. Andrew Wommack Ministries in Woodland Park is another Colorado ministry fighting a legal battle over the right to gather in opposition to Colorado’s COVID-19 restrictions.