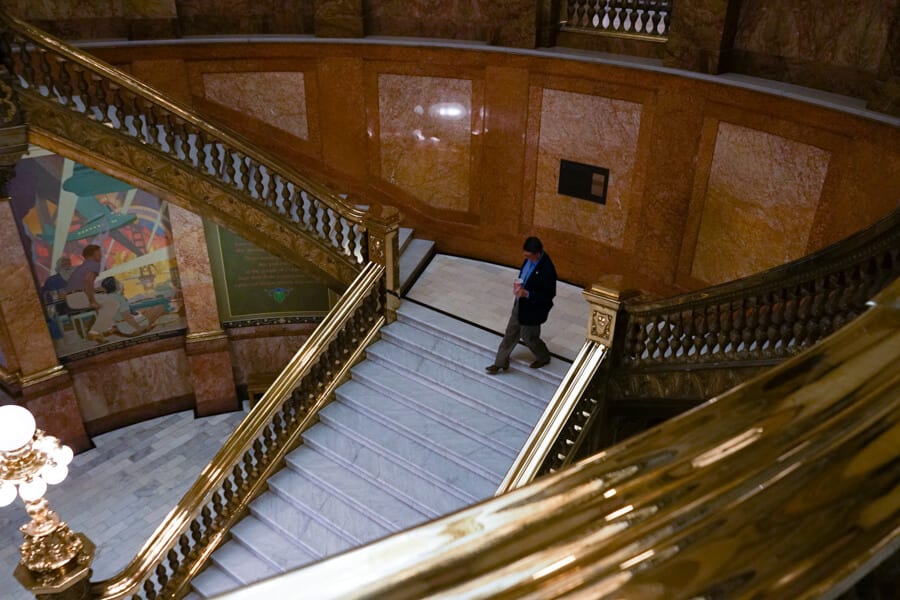 Temperature checks. A closed cafeteria. Spaced seating. Lawmakers in masks separated by plexiglass. This may be the new normal at the state Capitol when the legislature reconvenes as soon as May 26.

The public health measures are needed for lawmakers to continue doing their work safely during the COVID-19 pandemic, which on March 14. Since then, the respiratory disease has killed more than 1,000 people in Colorado.

The pandemic also has blown an estimated in the state’s $30-plus billion budget due to the loss of sales and income tax revenue as businesses remain on standby and unemployment spikes. The seven lawmakers on the Joint Budget Committee have voted over the last two weeks to withhold a 3% pay increase for state workers, table capital construction projects and cut more than $100 million to higher education, among other cuts totaling more than $700 million. The committee is considering more cuts to the senior property tax exemption, the state’s contribution to the public employee’s retirement fund, K-12 funding, suicide prevention, substance use disorder treatment, mental health services, vaccine outreach, and health coverage for the uninsured and immigrants.

But even as decisions that will affect most Coloradans are debated, public access to the Capitol and in-person access to lawmakers will be limited to prevent the spread of the new coronavirus. The options being discussed include encouraging lobbyists not to gather in the halls outside the chambers and limiting seating in committee rooms and the public gallery above the House and Senate floors.

To make their voices heard, advocates say they are sending emails to lawmakers and hosting town halls and online forums. Some have been calling, texting and sending letters. Others say they are banding together and leveraging their networks. But, even so, they say, it’s not quite the same.

“I definitely think there will be something lost. In-person communication is the best way to get to know someone,” said Dusti Gurule, the executive director of the advocacy organization Colorado Organization for Latina Opportunity and Reproductive Rights, or COLOR. “I hope it is something that [lawmakers] are thinking about — transparency and the voice of who is most impacted.”

Questions remain about how to conduct legislative business during the pandemic. Democrats want to allow members who fear for their health to participate remotely despite objections from Republicans who say the Colorado constitution forbids it. Even if lawmakers allow remote participation by voting to amend procedural rules, it’s unclear how those tuning in from home would speak in floor debates, offer amendments or vote. And it’s still unclear whether reporters will have access to the floor of the House and Senate chambers, where they currently work during the session, in part given the need to spread lawmakers out to achieve social distancing. , lawmakers are planning to recommend — rather than require — that the public not enter the building with a temperature over 100.4 degrees Fahrenheit and wear non-surgical face masks.

Despite the two-month-long recess, much legislative work has occurred with little or no public notice. In part due to budget cuts, lawmakers have already abandoned big policy priorities without a vote, including a bill to set up a state-run health insurance plan known as the “Colorado Option” and a paid family and medical leave program, which advocates have demanded for the past six years and say is needed now more than ever.

From afar, Amie Baca-Oehlert, president of the Colorado Education Association, said she has been watching the Joint Budget Committee cutting funding for education. She said this has created a lot of anxiety and despair. But she’s hopeful teachers are watching and will make their voices heard before further cuts are made. In previous years, the Colorado Education Association has organized

“In some ways, I think that there actually is the opportunity to have more eyes on them than normal because we have so many people who are in stay-at-home situations because they are not working,” Baca-Oehlert said. “My hope is that the public would tune in.”

But sometimes the public may not know to tune in. A gathering of more than two elected officials is considered a quorum and subject to open-meeting laws. But many of these public meetings are not being announced and may go unnoticed, said Jeff Roberts, executive director of the Colorado Freedom of Information Coalition.

Besides, he said, not everyone has access to adequate internet or a computer to watch and participate in committee hearings remotely.

The lack of remote access is just another iteration of a longstanding lack of access to state lawmakers among some communities in Colorado. Regular sessions are held during the day when working people may not be able to take time off. Others may not be able to drive hours to Denver.

“Most of our people have always had an access issue,” said Jenny Davies, the co-founder of Progressive Promotions, a liberal advocacy group. “The structure of the legislature definitely privileges people who have more freedom and economic flexibility.”

On Monday, the eight-member Executive Committee plans to begin finalizing a plan for how to manage the pandemic for the second half of the session. And lawmakers say they are confident they can strike the right balance between public access and safety.

“The public is such an important part of this. The legislature is the people’s house. We are there to be transparent and accountable to the people of this state,” said Rep. Chris Kennedy, a Democrat from Lakewood who has been helping work on the plan for remote participation among lawmakers. He said there will have to be greater emphasis placed on calling, texting and acknowledging written forms of communication.

“I think that we don’t lose a lot as long as every legislator puts in the effort.”