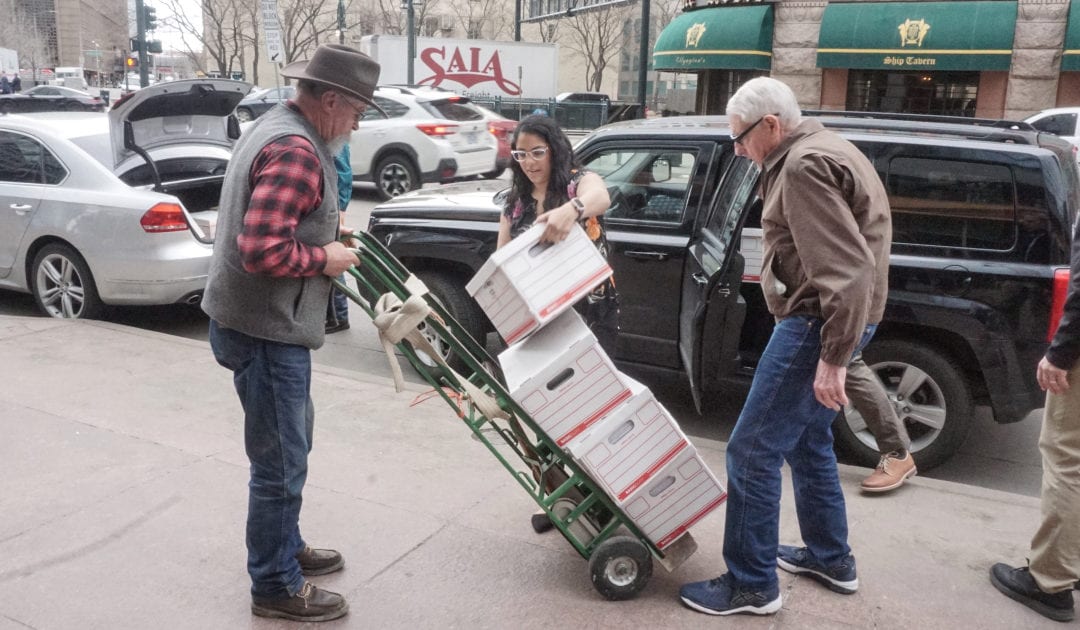 Prepare for an onslaught of abortion debate in the next two months on social media, in the mail and on television as Colorado once again prepares to vote on an abortion measure.

A Colorado Springs-based issue committee for Proposition 115 — which would prohibit abortion after 22 weeks of pregnancy — calls itself “End Birthday Abortions” and created a website picturing a cupcake with a single candle sitting on a highchair. The goal is to make people aware that Colorado is one of only seven states with no restrictions on when a woman can get an abortion, right up to the due date, campaign director Marcie Little said.

Supporters of the ban are recirculating an old photo of a woman’s large pregnant belly with a handwritten note attached: “It’s my due date today. My baby’s healthy. I’m healthy. In Colorado it’s legal for me to get an abortion today. Our legislature has failed.”

On the other side, opponents of the ballot measure launched a counterattack Wednesday with the support of 75 organizations, including the National Women’s Law Center and the Women’s Lobby. The issue committee — called Abortion Access for All — has reserved nearly $1 million in television ad time for the month of October, according to campaign filings reviewed by The Colorado Sun.

The group’s main message is that the measure would ban abortion in the second half of pregnancy, even in cases of rape, incest, health risks for the mother and when “a woman receives a lethal fetal diagnosis and her baby could not survive outside the womb,” said Stefanie Clarke, communications director for the “Vote No on 115” campaign. The group went live with a new website Wednesday that includes a section where women who have had abortions later in pregnancy can share their stories.

Similar proposals to ban abortion have failed at the legislature multiple times, and so-called “personhood” measures on the ballot were defeated in 2008, 2010 and 2014. Those ballot questions sought to define fetuses as people or children under the Colorado criminal code.

Proposition 115 will ask voters to ban abortion after 22 weeks except in cases in which the mother is at risk of dying. It would exempt pregnant women and pharmacists who violate the law from prosecution, but doctors who perform an abortion in later pregnancy could face a criminal charge — not punishable by jail time but with fines.

Clarke called this year’s measure a “sneaky, back-door” attempt to ban abortion using scare tactics, such as suggesting that women are getting abortions on what could have been their babys’ birthdays.

“There is actually no factual basis for that,” she said. “They are going to all lengths. It’s really disgusting. That is not how reproductive health care works.”

Women who choose to end their pregnancies after 22 weeks could have just learned about a severe fetal abnormality, or that their pregnancy could cause them to have a permanent disability, opponents of the measure said. In one example, shared by a doctor, the pregnant person seeking an abortion was a 12-year-old child who had been raped by a family member and concealed the pregnancy until after 22 weeks.

“Colorado voters know a ban when they see one,” Clarke said. “They do not believe politicians should interfere in anyone’s personal, private medical decisions, that these decisions should remain between doctors and patients. And just as we have previously rejected attempts to put politics in the middle of health care decisions that belong between a woman and her doctor, we will do it again in 2020.”

But proponents of the ballot measure at the End Birthday Abortions and the Due Date Too Late committees argue in their online materials that a 22-week-old fetus can feel pain, referring to various studies. The “death is excruciating and cruel,” says Due Date Too Late’s website.

The narrative that all later-pregnancy abortions happen because of medical emergencies or fatal fetal abnormalities is “fabricated by abortion rights extremists without any data in order to manipulate public opinion,” Due Date Too Late states. The committee did not respond to a request for an interview for this story.

Other facts are also in dispute between the two sides. Due Date Too Late says there were more than 300 “late-term” abortions in Colorado in 2019. But Abortion Access for All says that nationwide, only about 1% of abortions occur after 22 weeks.

The exact percentage for Colorado is unknown but is likely higher than the national average because this state has no restrictions on when during a pregnancy a woman can have an abortion.

Of the 9,002 abortions in Colorado last year, almost 1,000 were for people who traveled from other states, most likely because of Colorado’s less-restrictive laws. The three most common states were Wyoming, New Mexico and South Dakota.

Proponents of the ballot measure have multiple issue committees with slightly different messages. End Birthday Abortions is focused on the Colorado Springs area, delivering flyers door to door and using social media to explain how an abortion in later pregnancy is performed, Little said.

“One of the issues we ran into while working to get the initiative on the ballot is that a lot of people don’t understand what a late-term abortion is,” she said. “They don’t really understand how late that happens.”

The 22-week cutoff is fair, even in cases of rape, incest or fetal abnormalities, Little said. “We are talking five and a half months into the pregnancy,” she said. “That does seem to give women enough time to fully consider what they want to do.”

Despite the track record on abortion votes in Colorado, Little said she believes the campaign has a better shot this time around, in part because of the national potlical climate and also because people are more aware of abortions in later pregnancy, thanks to the sharing of videos and photos on social media.

“There is more momentum now,” she said. “It’s easier to get the word out.”

Others warn that such a law would lead to further restrictions on abortion in Colorado.

“Prop. 115 is just another in a long line of unconstitutional, unpopular and medically unnecessary attacks on abortion,” said Priya Walia at the National Women’s Law Center. “It affects all pregnant people.”

And Wendy Howell, acting state director of the Colorado Working Families Party, called the ballot measure another attempt by “politicians and special interest groups to control women’s bodies in Colorado.”

“Time and time again they have failed,” she said. “And now they are back at it.”