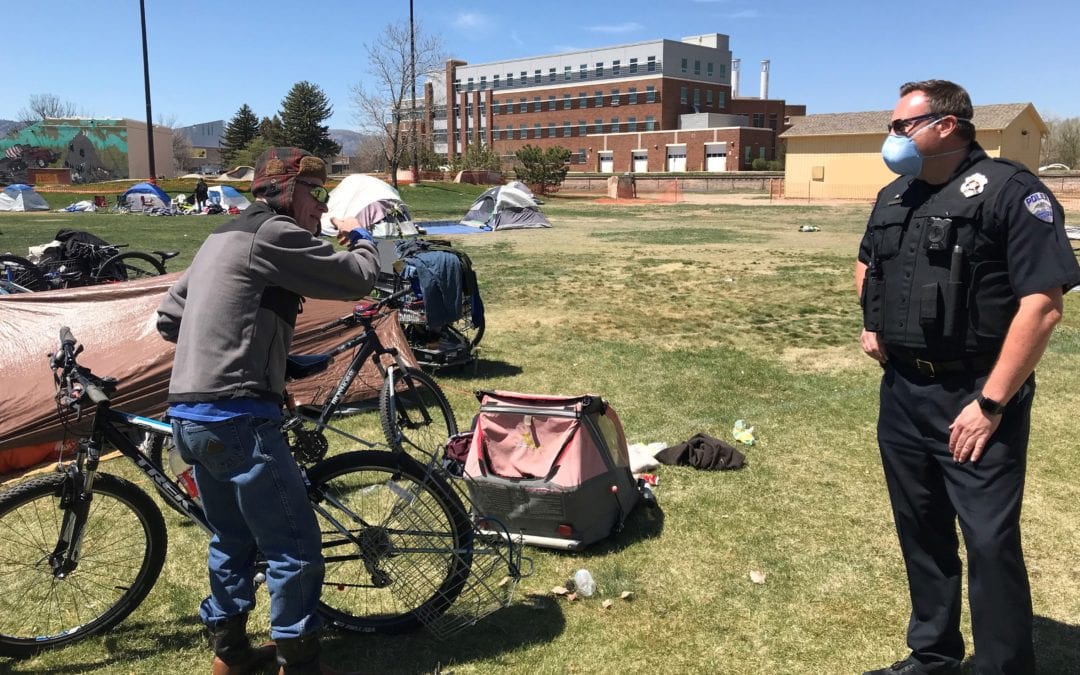 But gradually the situation settled down as Heritage Park’s 117 tents were slowly broken down and belongings pushed into piles before being hauled away. By the 5 p.m. deadline, about 20 tents and a gathering of people remained while a police drone flew overhead.

“(The police arrests) caused so much tension that it caused other disputes within the community and that resulted in taking more people in, and this was already a stressful situation,” said Peigan, an on-again-off-again homeless person who grew up in Fort Collins and was helping friends load up their belongings. “But since most of the people who tend to cause problems have already been removed from the situation, it’s pretty docile now.”

Fort Collins Police Chief Jeff Swoboda said he and officers informed occupants of the camp on Wednesday morning that if they had a warrant for their arrest or anyone started fighting in the presence of officers that they would be taken to jail. The controversial encampment began in mid-March as an outdoor shelter for homeless during the coronavirus pandemic.

“From the very beginning, this place was intended as a safe place for camping during a pandemic, not a safe place where wanted individuals would camp with impunity,” he said, while walking the park late Wednesday morning. “I wouldn’t say it was chaotic, but it probably made some people concerned that we were putting them in handcuffs.”

Signs were posted Monday morning reminding those living in the tents of the 5 p.m. Wednesday deadline.

He said police worked with homeless advocate groups to educate those living in the tents of the additional resources being offered at the adjacent Northside Aztlan Community Center.

The community center will remain open as an emergency shelter for the homeless for an unspecified time. It can sleep up to 200 men (women are housed at other sites), though only about half of the beds were used nightly on average, according to homeless advocates. It also offers food, restrooms, showers and health care resources. With the encampment closing, the center will offer additional separate housing space for those over 65 years old and having specific underlying medical conditions.

Swoboda said the encampment was starting to receive a lot of media attention and was attracting people from surrounding communities. He said as the number of tents grew to more than 100, the problems grew.

“This is a campground that’s not meant to be a campground, and having over a hundred tents and a hundred-some people out here with very limited lighting proved challenging,” he said. “There were fights, groups starting to get on each other’s nerves, and we were trying to police all that at a very low level and step in before a major incident happened.”

On Wednesday, most of the trash was piled in containers provided by the city and there didn’t appear to be significant damage to the 13-acre park other than worn grass where people walked and yellowed grass under where tents were pitched, some as long as a month or more. The city’s parks department will immediately start working to rehabilitate the park.

Shopping masks: City may require them