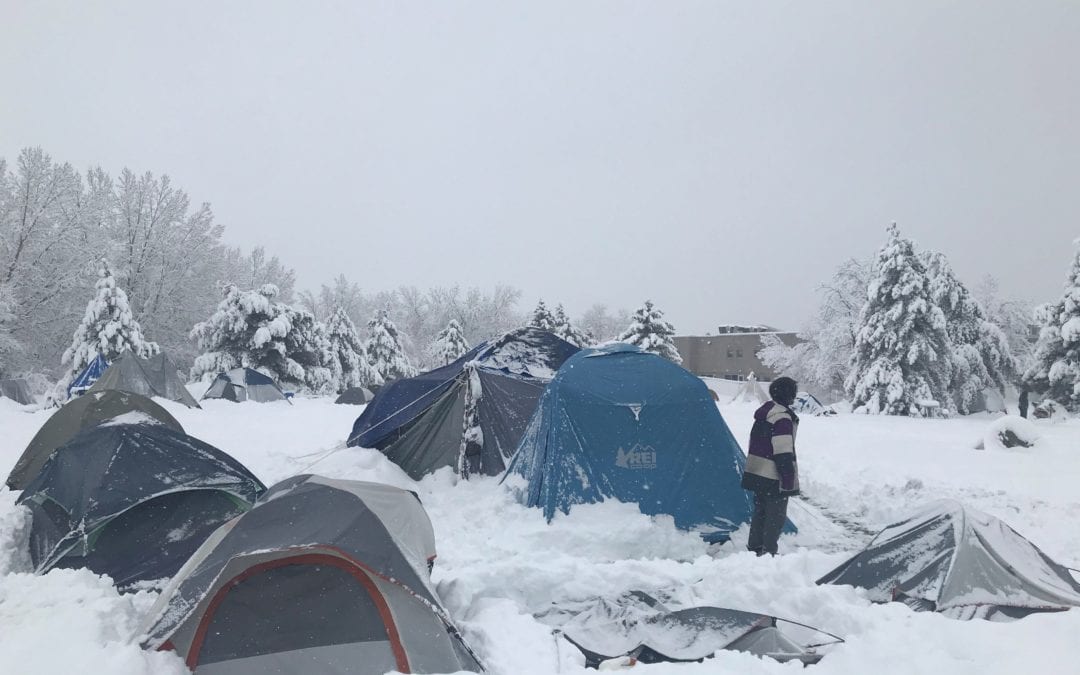 Even during snowstorm, some of Fort Collins’ homeless shun available shelter

Nearly a foot of wet, heavy snow collapsed multiple tents at Heritage Park on Wednesday night, prompting occupants of Fort Collins’ temporary homeless tent city to dig out and rush into the warmth of the nearby Northside Aztlan Community Center.

The center, which is serving as an emergency homeless shelter, took in about a dozen wet and cold people overnight. Joe Domko, executive director of Catholic Charities of Northern Larimer, said staff handed out cold-weather gear Thursday and will again Friday and will make sure people have extended access to the shelter.

He estimated a dozen tents collapsed during the snow storm.

Fort Collins Rescue Mission handed out extra blankets and other items Wednesday afternoon to help those who wished to brave the cold, snowy night survive the brutal conditions.

“I’ve been helping dig people out since I woke up, but some of them don’t want the help and they don’t know the severity of how bad this is,” homeless camper Juliana Ott said early Thursday. “It’s actually worrisome because so many tents have collapsed and we don’t know if there are people inside.”

There were no known injuries, but Jason Page described the scene as “chaotic.”

“There were a lot of tents caved in,” said Page, who weathered the storm in his tent thanks to a zero-degree sleeping bag. “It was a learning experience for a lot of people because it was the first time they dealt with something like this. Mother Nature is not playing.”

Why some homeless people shun shelters

The city said its supply of beds for the homeless population exceeds demand at various shelters.

Capacity at the Aztlan Center, Community of Christ Church and Fort Collins Rescue Mission has been about 50%, on average, the city said. The Aztlan Center has as many as 200 beds and has been taking in about 100 men nightly (women are housed elsewhere).

By varying accounts, another 100 homeless shun the Aztlan Center shelter and hunker down in their tents and makeshift shelters, which now number around 90 in the 13-acre park.

With the warmth of the center a little more than a football field away from the tent city, it might be puzzling why some would choose a tent over the shelter.

Jay, who identified only by one name, said he never stays in shelters, though occasionally he spends a night with a friend.

He said he feels more comfortable staying out in a tent near his friends than in a shelter.

“It’s a pain in the butt with snow everywhere and wet,” he said Wednesday, noting he would put on extra layers for the storm. “Maybe it’s not for everyone, but we are just trying to live out here and survive.

“We are grown-a– people. Some people don’t choose it, but some of us do. I live a pretty good life. No one should feel sorry for me.”

The Aztlan Center offers one-stop convenience — access to beds, food, water, restrooms, showers, health care and case managers — close to the tent city. Yet that still is not enough to draw some of the homeless population to the shelter.

Tents are a controlled environment for some, said Seth Forwood, director of the Fort Collins Rescue Mission. “A lot of their lives is outside of their control and dictated by the people who feed them or give them supplies. If they have a small space that they can control, they are going to take that. Just like you and I would take a small bit of control if the rest of our life was chaos.”

Still, he admits helping everyone is a challenge because of the variance of trauma and other issues many in the homeless community face daily.

“Not going to lie that it’s frustrating sometimes, all the work we are doing to create the space in here, but we get it,” he said. “When you bore in and actually have a conversation with some of them there is a logic behind it. We are just trying to create as many environments as possible for people to make the best decisions possible to get through this and also to set the ultimate goal of housing and stability.”

David Routt, executive director of Homeward Alliance, said though the “encampment’’ at Heritage Park is not ideal, it is the CDC’s recommendation in the absence of housing, hotels or other options not to break up encampments during the pandemic.

“It doesn’t mean it’s a great idea to have an encampment,” he said. “It just means it’s the best bad idea until we have the solution to get people into housing.”

Tactics for dealing with conditions

In interviews with those living the “homeless village,” as Jay refers to it, some said it’s not overly difficult spending nights outdoors in the winter, if you are prepared.

Page stayed in the Aztlan Center a few nights when temperatures fell into the teens earlier this week, but he prefers to sleep in his tent.

“Usually I just crawl up in my sleeping bag and I’m out until morning, but I know what I’m doing,” he said. “If not properly equipped, it can be miserable, especially when it snows. And you saw that last night.”

Gloria Gonzales said she was living in her vehicle, but it was involved in a crash in Denver. She heard about the tent city and bought a tent and moved up here.

She said she stays warm thanks to an electric stove and heater. She sleeps in her tent but uses the shelter to eat and clean up.

“We are just trying to do everything we can do to survive and not be a burden to no one,” Gonzales said. “It’s not that we want to be in this situation. We are just regular hardworking people who are down on our luck.”

Some stay warm with propane heaters and gas lanterns, while others admitted to lighting candles to stay warm, though regulations prohibit open flames.

Some have warm sleeping bags, while others pile on the blankets. Many sleep with hand and feet warmers, while others say sleeping in numbers helps them fend off the cold.

“We band together,” said Santana, who goes by one name. “It’s amazing how warm you can be if you have several people in the tent. And we have a propane stove; otherwise it’s freezing.”

Before coronavirus: How Fort Collins fared during the Spanish flu