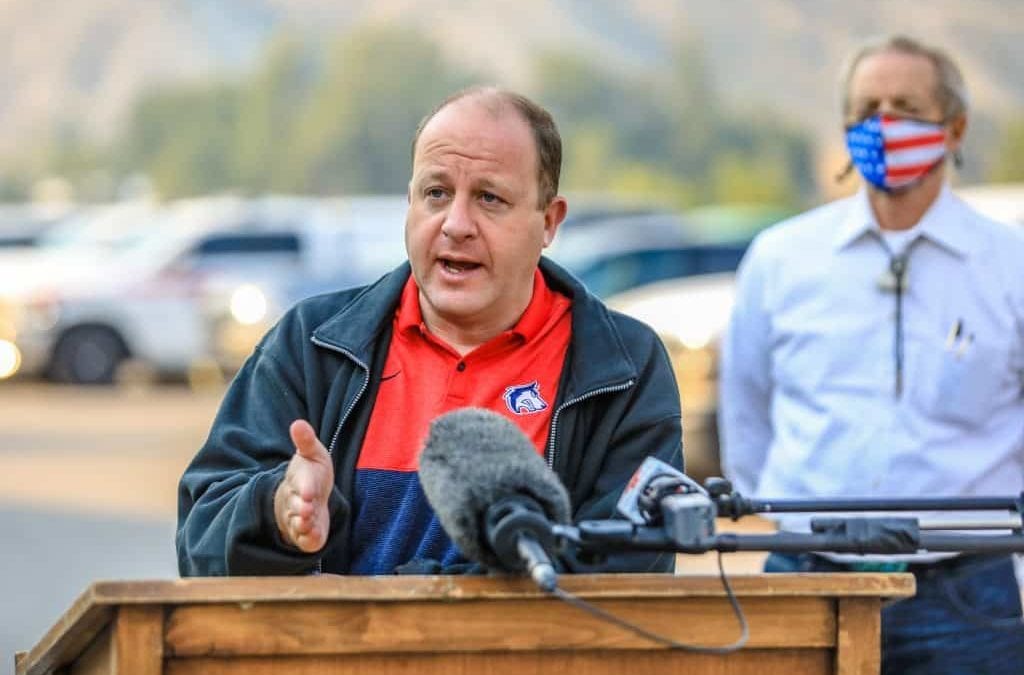 EAGLE — Gov. Jared Polis on Friday said he’s optimistic that Interstate 70 will be able to reopen in two to three days as crews continue to battle the Grizzly Creek Fire along the state’s main east-west artery.

Polis made his remarks after meeting with the fire’s incident command team at the Eagle County Fairgrounds.

“Literally the fire is right on I-70,” Polis said. “They’re doing their best and so far they have been successful in having one lane open for emergency access of fire vehicles and firefighting supplies and personnel. But literally the flames are right on the edge of the highway.

“The best realistic case would be two to three days. But it’s really a question of when it’s no longer right on the highway. But I want people to know this is a closure for the reason that literally the fire is right on highway 70 in several places.”

The interstate has been shut down in both directions since Monday afternoon when  the blaze broke out in the median of the interstate near the Grizzly Creek recreation area about 1:30 p.m.

The incident command team, headed by Marty Adell, reported the fire doubled in size overnight into Friday, reported at 14, 663 acres. The blaze remains the top priority wildfire in the country because of the I-70 shutdown, which has strained supply chains and created chaos on backcountry roads for county officials and the Colorado Department of Transportation as travelers have ignored recommended detours.

Independence Pass was re-opened Friday to limited traffic, CDOT announced at 5:30 p.m. The pass, which was closed Wednesday after it was overrun with semi-trucks — which aren’t allowed anytime on the narrow, winding road — saw huge amounts of passenger car traffic earlier in the week, Pitkin County Sheriff Joe DiSalvo said.

“What kind of neighbors are they when they turn their back on us in an emergency. They’re basically giving us the finger,” Jankovsky said in a phone interview with the Glenwood Springs Post Independent.

“It’s a matter of health, safety and welfare,” Jankovsky said. “That’s our emergency exit. They simply need to manage it and make sure trucks don’t even get into Aspen in the first place … not close it. It can be done.”

Cottonwood Pass, which connects from Gypsum to south of Glenwood Springs, was closed Tuesday after an Amazon truck rolled off the side of the road. Eagle County and Forest Service officials also indefinitely closed the Eagle-Thomasville Road, which is up the Fryingpan Valley east of Basalt, in both directions after multiple accidents occurred.

“It’s kind of like a game of whack-a-mole,” Amber Barrett with the Eagle County Sheriff’s Office said Thursday. “You close one road and another one becomes a problem. One day it was Cottonwood (Pass), one day it was Independence Pass, then Crooked Creek or Thomasville Road 400.

“These are basically trails, not roads. And now that the roads are trashed, four-wheel-drive trucks are getting stuck.”

Polis, when asked about weekend traffic to the High County, said he would urge travelers to take into account air quality issues and the road closures before jumping in the car or getting out in the backcountry.

“It’s a good time, especially for residents in most affected areas, to stay home in a filtered air environment,” he said. “It’s not a good time to be exerting yourself physically and that includes the Front Range when the wind is blowing that way. Very poor air quality with heavy particulates from these fires.”