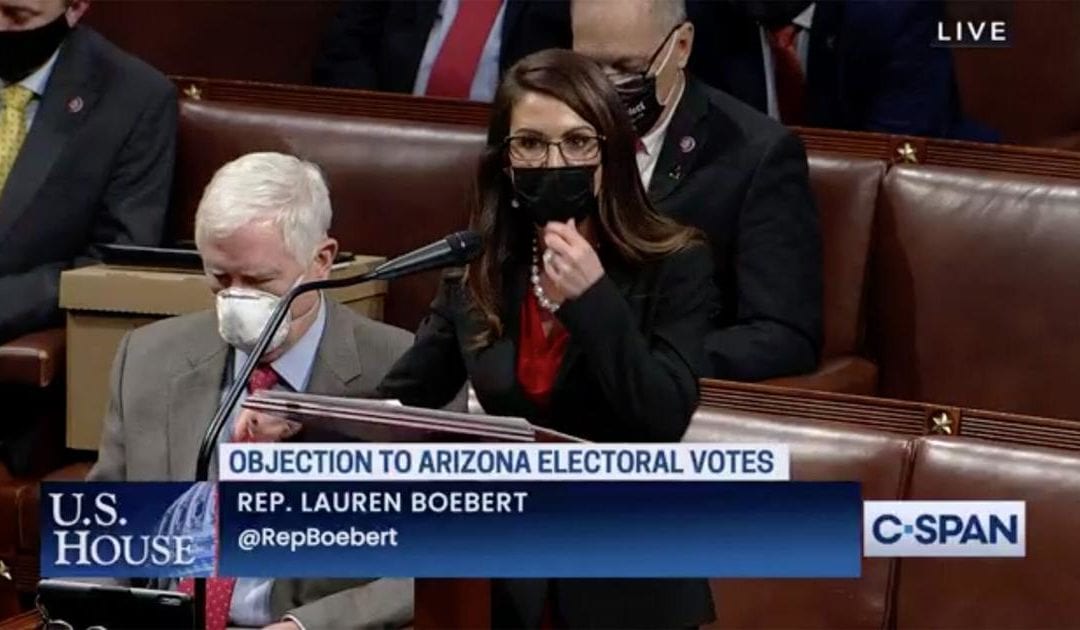 U.S. Rep. Ken Buck, the chairman of Colorado’s Republican Party, is calling on U.S. Rep. Lauren Boebert and other members of Congress to “tone down the rhetoric” as House Democrats ramp up efforts to force President Donald Trump from office in the wake of last week’s violent attack on the U.S. Capitol.

“It’s our responsibility, as members of Congress to tone down the rhetoric. Left or right, we all need to act as leaders and come together during this time,” Buck told Colorado Politics in response to recent tweets posted by Boebert, the Rifle Republican and gun-rights advocate who began her first term in Congress a week ago, and other heated rhetoric from lawmakers.

Buck on Saturday led a letter from prominent House Republicans calling on President-elect Joe Biden to ask House Speaker Nancy Pelosi to drop plans to impeach Trump “[i]n the spirit of healing and fidelity to our Constitution.”

At the same time, pressure has been mounting on Boebert from the left to resign over her remarks on social media and the floor of the House as lawmakers debated whether to certify Biden’s election win.

“Today is 1776,” Boebert posted as pro-Trump crowds were gathering on the National Mall ahead of Congress’ joint session.

“America is depending on all of us today,” she tweeted later. “This is something I don’t take lightly. I will fight with everything I have to ensure the fairness of the election.”

Boebert was one of more than 100 House Republicans who formally objected to counting electoral votes from a half dozen states won by Biden, based on unfounded claims the election was “stolen” from Trump.

“Madame Speaker, I have constituents outside this building right now. I promised my voters to be their voice,” Boebert said in a speech delivered as rioters were storming into the Capitol. “They know that this election is not right, and as their representative I am sent here to represent them, I will not allow the people to be ignored.”

Her voice rising, Boebert argued that “our constitutional republic ceases to exist” if lawmakers who “have sided with the extremist left” vote to certify Biden’s win.

ProgressNow Colorado and dozens of Democratic officials signed on to a letter calling for the resignation of Boebert and U.S. Rep. Doug Lamborn, the Colorado Springs Republican who voted with her to reject the electoral votes from two states won by Biden.

The combative Boebert — who drew national attention before she was sworn in for her vow to carry a handgun at the Capitol and on the streets of Washington, D.C. — was having none of it, turning up the temperature in response to calls that she step down or be expelled.

“In the past 5 days the left has shown us what vile hypocrites they truly are,” Boebert tweeted Sunday as #ResignBoebert became one of the top-trending topics on Twitter all afternoon.

“They are driven by hate, projection and endless conspiracy theories.”

Boebert didn’t immediately respond to a request for comment on Buck’s remarks, but her spokesman had this to say when asked whether she considers Biden the legitimate president-elect and whether she plans to attend his inauguration on Jan. 20:

“The Congresswoman continues to make efforts to ensure we have integrity in our elections. Our Republic depends on it.”

CLARIFICATION: The article and headline have been updated to clarify that U.S. Rep. Ken Buck wants all members of Congress to choose their words more carefully, not just U.S. Rep. Lauren Boebert.