Colorado flood warnings: More issued this year than any year in history 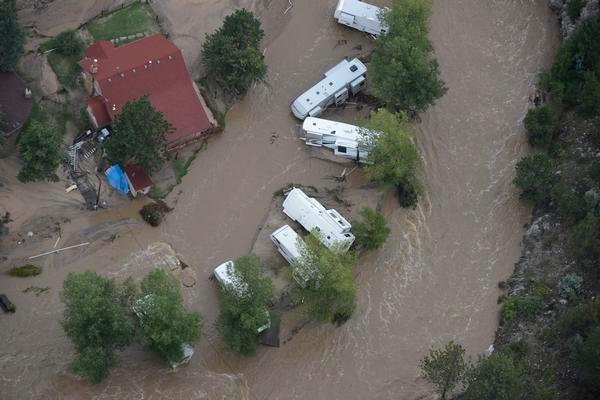 It’s no secret that there have been multiple occasions where flooding has wreaked havoc across Colorado over the years. This year, that especially rings true. Although the year is not over yet, the number of flash flood warnings that have been issued across Colorado has already shattered the previous record set in 2013.

The National Weather Service is responsible for issuing flash flood warnings when areas are about to or are experiencing impactful weather. Flash flood warnings are issued to alert the public that a flash flood is imminent or occurring in the warned area. A flash flood is a sudden, violent flood after heavy rain, or occasionally after a dam break. Rainfall intensity and duration, topography, soil conditions and ground cover contribute to flash flooding.

“Burn scars have definitely increased the number of watches/warnings issued, no question,” Thomas Renwick of the the NWS in Grand Junction said.

Wildfires, which are becoming more numerous and intense across the west amid a warming climate, and the effects of heavy, monsoon rains, lead to big flooding events like we’ve seen this year. This year was a perfect setup for flash flooding. We were coming off of a year with extreme drought plaguing the state, we just had our most active wildfire season ever and we saw the monsoon season actually impact us this year for the first time in years. This combination was the perfect recipe for flash flooding.

Western Colorado and the NWS in Grand Junction

Flash flood warnings normally pop up around burn scar areas but they also can come from slot canyons and converging creeks and rivers. The National Weather Service in Grand Junction forecasts for most of western Colorado and eastern Utah. In western Colorado, the Lake Christine, Pine Gulch, Pack Creek, and the Grizzly Creek burn scars are some of the areas that have faced flooding issues recently. Especially the Grizzy Creek burn scar in Glenwood Canyon.

There were a notable amount of flash flood warnings issued in July by the weather service in Grand Junction. This was when multiple surges of monsoon moisture pushed in and caused numerous mudslides and debris flows to cover the interstates and highways.

“The amount of rain that may cause flash flooding in burn scars is MUCH less than over an area that doesn’t have a burn scar,” Renwick said. “Thus, the increased amount of warnings this year.”

Southeast Colorado and the NWS in Pueblo

Northeast Colorado and the NWS in Boulder

Thanks to burns scars and wild weather events occurring, flash flooding has hit northeast Colorado many times. The Cameron Peak and East Troublesome burn scars have been creating flood concerns for months now and thanks to the heavy rains we’ve seen this year, they have produced catastrophic damage and even claimed lives.

In a similar setup, monsoon rains and slow-moving thunderstorms have led to many inches of rain falling in some areas. There was a year, however, with more flash flood warnings than this one for the National Weather Service’s Boulder office. The devasting floods in September 2013 led to that year having more flooding warnings than 2021. This year trails 2013 by two flash flood warnings, and though it’s not a complete guarantee, there is the possibility of having more flash flooding concerns in the coming weeks as we are still in monsoon season.

Overall, flash flooding occurs in Colorado every single year. Some years there is not much flooding, but in other years, an entire season could be remembered by the flooding that happened. There is not an official “flash flood season” in Colorado, but if there was, it would probably land between May and September, so we still have a couple of weeks of flash flooding potential. Flash flooding doesn’t normally occur in the wintertime in Colorado.