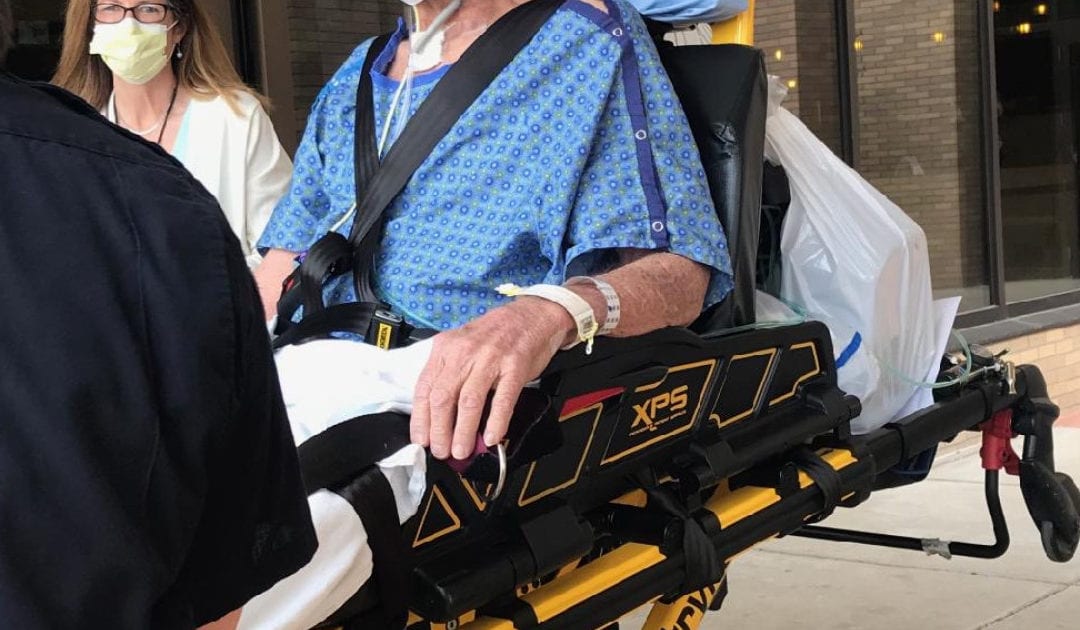 When Dr. Joel Strohecker returned to treating coronavirus after his own three-week battle with the disease, the outlook at the hospital was grim.

It was early April and people were dying every day, said the physician, who works at Lutheran Medical Center in Wheat Ridge. Testing was scarce. The intensive care unit was filling up.

But doctors were starting to gain more experience battling COVID-19, the disease caused by coronavirus, and implementing the lessons they and their colleagues across the country had learned in weeks prior. Outcomes for some of the sickest patients appeared to be improving.

One of those patients was Doug Summerfield, a 75-year-old, asthmatic man from Arvada who was in dire shape when he came by ambulance to Lutheran on March 29. “He got intubated immediately,” Strohecker said. “He was in a bad spot.”

But after a month on a ventilator and some experimental treatments, Summerfield, a married father of two who served in the Air Force, was removed from the machine and last week was released from the hospital to a rehab center.

“It is pretty amazing,” Summerfield said in a phone interview with The Colorado Sun from his room in a rehabilitation center.

Strohecker points to Summerfield as part of a growing number of patients he said are giving him a reason to be optimistic. “We’re seeing a few more pull through, like him,” he said. “I’m a little more hopeful.”

More than two months into the coronavirus crisis in the U.S., doctors are learning more every day about the disease and how to fight it. It’s like treating any ailment: medical professionals get better with practice.

“I feel like we understand the disease better than we did in the beginning,” said Dr. Marc Moss, who works in pulmonology and critical care at UCHealth University of Colorado Hospital. “I think a lot of medicine is pattern recognition and the more patterns you see the more comfortable you are caring for those patients.”

Dr. Alex Benson, who leads pulmonary and critical care for Centura Health’s 17 hospitals in Colorado and Kansas, said his health care system is seeing improved outcomes as well. He attributes that to doctors and nurses getting better at treating acute respiratory distress syndrome, which is what coronavirus patients get when they are most ill.

And the details can make a difference.

“It seems like we’re having success,” Strohecker said. “We don’t have a cure, but we’re learning little tricks that we think help. It seems we’re seeing an improvement with the little things we’re doing.”

“We had heard other people had success”

“Basically,” he said in an interview on Thursday, “I died about two months ago and I was reborn about five days ago.”

Mary, his wife of 44 years, watched as her husband’s condition quickly deteriorated over a matter of days in late March. Summerfield had gone to the hospital and received a diagnosis of pneumonia from a likely coronavirus infection, but he opted to go home and try to manage on his own with the help of oxygen.

But then Summerfield couldn’t really eat because he had no appetite and had lost his sense of smell and his ability to taste. And by March 29, a device that was measuring his oxygen levels showed frightening readings.

“He was in such bad shape that Sunday morning that I called the ambulance,” Mary said. “He couldn’t breathe. He could answer a simple question, but he had to think about it. He wasn’t processing a lot of information.”

Strohecker says Summerfield was so sick that doctors cranked his ventilator up to 100% oxygenation, the highest possible level.

Strohecker said the medical team working on Summerfield asked Mary to see if she was OK with them trying some experimental interventions. Tests showed his blot-clotting factors were high and they knew from autopsies that many coronavirus patients had clots, so they gave him blood-thinning medicine.

They also gave Summerfield convalescent plasma treatment, giving him blood from a patient who had already recovered from the virus and had antibodies in their system.

“We had heard other people had success with it,” Strohecker said.

Mary said she was willing to try anything. “It was scary, but at that point I would have done anything to save him,” she said.

Strohecker said there’s no way to tell exactly what made the difference for Summerfield, but they’re at least providing a new road map for helping people who fall ill with coronavirus.

“I don’t know if either of those things made a difference,” he said. “I really don’t. But we did those things and they are all being studied. In time we’ll know whether those two things actually worked or whether he just pulled through despite all of our efforts.”

“He was on death’s door for probably two weeks for sure and then he slowly got better,” he said. “Very slowly.”

The dire nature of the disease has made it more acceptable for clinicians to turn toward the unknown. And there’s hope that the treatments doctors are throwing at the disease will work.

“What we like in medicine is we like randomized, controlled trials where we try one thing against another and nobody knows what’s going on and then we look at the data way down the road,” Strohecker said. “But when you’re in a scenario like this, where the world is crashing down on you, families are willing to say ‘OK, let’s try.’”

However Benson, who works at Centura Health, is skeptical about using experimental treatments and believes they don’t necessarily give patients a better chance.

“I think a lot of the experimental therapies that have not been proven that people have started using are dangerous and put people at risk,” he said. “Giving people things and then seeing how the patient does and then trying to determine whether those things worked, the problem is most patients are going to get better from this. … I think no one’s giving things with malintent. Everyone is just doing their best to help.”

The reality, he says, is that the virus has been less lethal in Colorado than data showed it as being elsewhere. Benson pointed to patients in their 90s who were intubated and put on ventilators and recovered.

MORE: To contain the coronavirus, Colorado needs an army of contact-tracers. This is how it will work.

“This disease is not as deadly as we initially thought based on the China data and based on the initial data in places that got hit hard and were overwhelmed,” he said. “We all had this sense that when people developed multiple organ failure or they needed to go on the mechanical ventilator that, for the most part, they were going to die. I think that was the general sense of the community when it came here, and that really has not been the experience. The majority of people make it through.”

Nevertheless, he says, care has improved because doctors and nurses are more experienced.

“We have a little bit more comfort and we’re a little less reactionary,” he said.

Moss said that comfort includes personal safety. Doctors and nurses are less worried about catching coronavirus in his hospital and just a handful have been infected, far fewer than what was expected based on the experience of colleagues in other parts of the U.S.

“I think we were able to learn from other cities about how to protect ourselves more,” he said.

And that has allowed doctors to use more less-invasive interventions that may be riskier for medical professionals and be more conservative when deciding whether or not to put a patient on a ventilator.

“We have no idea where he got it”

Coronavirus has kept Mary away from her husband for the longest stretch of their marriage. She still isn’t allowed to be with him while he’s in recovery, but she’s thankful that he’ll be coming home.

“It was tough. It was very tough,” she said. “Every time you turn on the news they talk about how many deaths there were and you’re sitting there going ‘your husband’s still on a ventilator. He’s not improving.’ It was a scary time.”

When Summerfield was discharged from the hospital, he was cheered by a crowd of medical professionals. He grabbed some workers’ hands as he was wheeled out of Lutheran Medical Center on a gurney.

Mary never got sick, and it’s unknown where Summerfield caught the virus. He took the disease seriously, limiting his time outside of the house.

“We have no idea where he got it,” she said.

Summerfield, who also survived cancer, says he’s still very weak and in pain. He can’t stand up and can only move his hands and feet a little bit. “I tell myself to stand up and it doesn’t happen,” he said.

He’s lost 30 pounds and said he feels “pretty pathetic as far as a physical human being goes.”

Summerfield, who has five grandchildren and a great grandchild, thinks it will be another two to four weeks before he can go home. He knows it will take a lot of work to get back into the shape he was in before the virus.

But he’s eager to get back home where he likes to tinker and write.