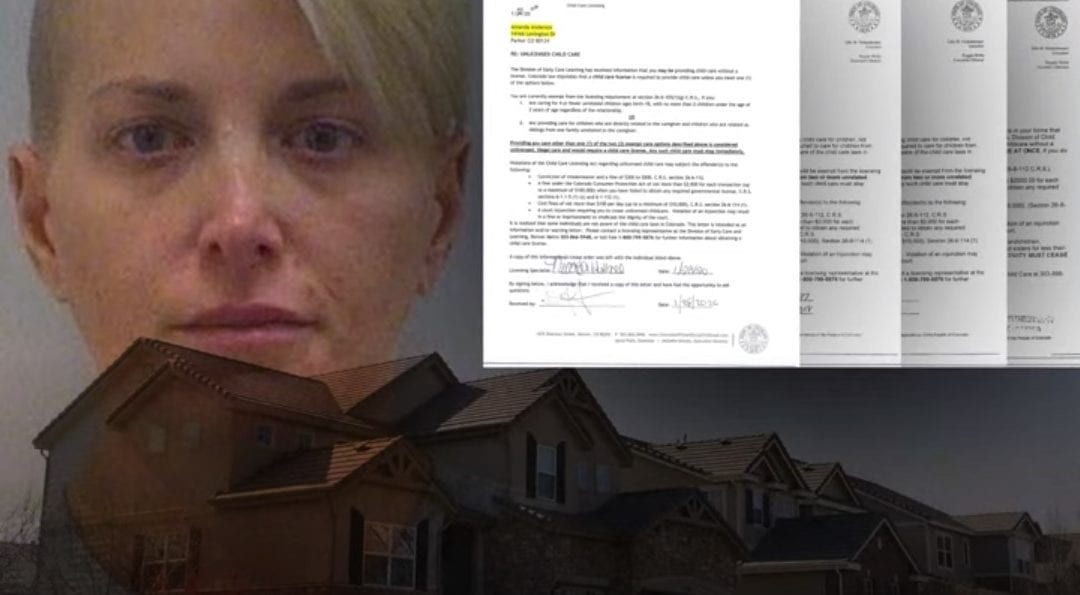 DENVER, CO – Following the death of at least 18 children in daycares in the last ten years, The Colorado Department of Human Services (DHS) announced Tuesday that an internal review of the way the agency addressed unlicensed daycares illegally operating in the state.

The DHS decision came just hours before local news program 9Wants to Know was scheduled to report that no person or company has been criminal charged or fined for operating an unlicensed daycare in violation of Colorado law.

The news program reported in February about the deaths of two small children at illegal home daycares that the state repeatedly and unsuccessfully failed to close.

The report also found that unlicensed daycares were routinely violating the limits on the number of children permitted at a center.

9Wants to Know reported that from 2010 to 2019, at least 18 children died inside unlicensed daycares in the state. Numbers for 2020 have not been released to date.

Parker, Colorado resident Kelsey Matthews could not find room in a licensed daycare for her three-month-old daughter Ellie. Matthews said that she had little choice but to use the unlicensed daycare center relying only on references:

“I talked to or checked in with about ten licensed in homes here in Parker and none of them had room. Does somebody stay home and not work? Or do we take the references that we checked out on her and go from there?”

Matthews chose the illegal and unlicensed daycare run by Amanda Anderson. Unknown to Matthews, DHS had repeatedly ordered Anderson to shut the daycare down for having too many children present.

Last August, her daughter died at Anderson’s daycare. On that day, Anderson was caring for 17 children by herself.

In a rare move, Anderson now faces felony counts of child abuse- knowingly or recklessly causing death, and tax evasion. There were no charges or fines for operating an illegal childcare center through DHS.

18 deaths of Colorado children in unlicensed child care. I have a bill that will help save kids’ lives. Let’s get this done. @COSenDem #HeyNext #copolitics https://t.co/AQ3zjOZ6MP

In fact, not a single person was fined or criminal charged in that past 10 years for providing an illegal unlicensed daycare. State Senator Jessie Danielson wants changes made:

“If a childcare facility had violated the law and had been issued cease and desist orders, that should be a transparent situation. Any parent should be able to see this kind of information publicly.”

9Wants to Know found out that the records are public, but obtaining them is a daunting and difficult path. DHS want the new agency to pay $29,700 for the decade of records saying the request would take 998 man hours.

This translates to 25 work weeks to respond to a request for what unlicensed daycares have been investigated by the agency and ordered to shut down.

Sen. Danielson said that the burden to obtain the information is simply out of reach for ordinary parents seeking daycare services:

“No family could bear that burden even if they knew how to go about getting the documents. We need to create a system where parents can easily access that information.”

Madlynn Ruble, DHS spokesperson, said that the agency began looking into deaths at the illegal centers in October, and that the work will be broadened into a review of “our process concerning unlicensed, illegal child care, and how we address these in the future under the current legal parameters.”

Ruble said that the review will be completed by July 1.

Operating an unlicensed daycare in Colorado is legal as long as there are no more than four children who are not related, and no more than two of the children can be under the age of two. An exception exists for when a provider watches their own children, kids from one other family who are siblings, or a combination of the two.

Do you want to join our private family of first responders and supporters?  Get unprecedented access to some of the most powerful stories that the media refuses to show you.  Proceeds get reinvested into having active, retired and wounded officers, their families and supporters tell more of these stories.  Click to check it out.

Off-duty deputy, mother of three shoots intruder who was forcing his way into her home as her kids ran for help

NORTH HANOVER COUNTY, NC – A mother of three, who also happens to be a sheriff’s deputy, was said to have shot a man who reportedly forced his way into her home on February 24th.

And apparently, the suspect involved in the matter had allegedly forced his way into another home nearby just minutes prior to trying to break into the off-duty deputy’s home.

NEW DETAILS: Neighbors say the deputy who fired the weapon is a mother of three, who was off-duty at home with her kids when a neighbor ran to her for help. https://t.co/CgCIQPw0oc

According to reports, the incident allegedly started off with the suspect, identified as 40-year-old Bart Anthony Coniglio, trying to forcibly enter the home of one of his relatives within the 4500 block of Barnards Landing Road in Wilmington around 12:42 p.m. on February 24th.

One of the residents inside of the home called 911, saying the following:

The unidentified female residents then reportedly ran out of her house with one of her friends, and headed over to a neighbors house that happened to be the residence of a New Hanover County Sheriff’s deputy, later identified as Leyla M. Davis-Woodhouse.

Coniglio was alleged to have chased the woman and her friend over to the off-duty deputy’s home – where Deputy Davis-Woodhouse was at home with her children at the time.

All this is still ongoing while the woman from the first home that Coniglio had tried allegedly breaking into was still on the line with the 911 dispatcher.

This woman was reportedly inside of one of Deputy Davis-Woodhouse’s bedrooms, giving a breakdown to the dispatcher as Coniglio tried to allegedly force his way into the off-duty deputy’s home:

“He’s trying to get in her house…She’s fighting with him outside.”

“She’s trying to get him out of the house…he won’t get out.”

Other neighbors had began to hear the commotion going on at Deputy Davis-Woodhouse’s home claim to have heard the off-duty deputy warn the suspect to not come any closer or she’d have to unholster her firearm.

Then, two shots were reportedly fired by Deputy Davis-Woodhouse.

With the first woman to have called 911 still on the line, she’d said to the dispatcher:

“She shot him or something.”

At approximately 12:48 p.m., Deputy Davis-Woodhouse called 911 herself, saying the following:

“This man has pushed his way into my house and I shot him twice. They need to get here now.”

The off-duty deputy informed the dispatcher about what preceded the shooting, saying:

“He fought me on the porch and pushed his way inside my house.”

Coniglio’s current condition is unclear as of this time, but he was reportedly transported to New Hanover Regional Medical Center following the shooting.

Outside of the recent allegations, Coniglio is said to have several other pending court dates linked to over a dozen other charges that range from assault on a female, domestic violence protective order violation, habitual assault, probation violation, and providing fictitious information to an officer.

Furthermore, Coniglio is also a convicted felon with a criminal record that dates back to 2002.

Deputy Davis-Woodhouse has been with the New Hanover County Sheriff’s Office since August of 2014, starting out initially as a detention officer. She then moved up to deputy in 2018 working the patrol division, before getting promoted to detective on February 9th of 2021.

The State Bureau of Investigation is currently handling the investigation into this case. It is unclear exactly what charges Coniglio is facing in relation to this incident.

Make sure you click “following” and then click “see first” so you don’t miss a thing! &nbsp;(See image below.)  Thanks for being a part of the LET family!